Lessons from the Night Shift

Smelling like french fries pays off big for this twentysomething essayist. 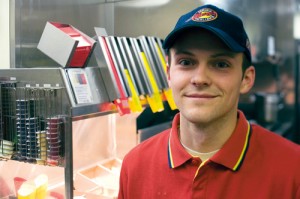 When Joey Franklin took a low-paying job at his neighborhood Wendy’s restaurant, he never imagined that the experience would one day be worth $20,000.

Joseph (Joey) C. Franklin (’07) believes in the power of positive thinking. So much so, in fact, that as soon as he entered Random House’s Twentysomething Essays by Twentysomething Writers contest, he put a note on his wall that said, “I am so thankful that I won $20,000 from the Random House contest.” Franklin and his wife, Melissa Fitzgerald Franklin (BA ’05), joked about his pretend victory for months, until one day Joey came home to find his note moved to the front door with the words Mission Accomplished written across it in red.

“I couldn’t believe it. For weeks I had this gnawing guilt that it wasn’t really me—that they had sent the e-mail to the wrong guy,” says Franklin, a senior majoring in English.

Franklin’s essay, “Working at Wendy’s,” was selected as the grand-prize winner from among thousands of entries, earning Franklin a prominent spot in a national publication and a check for $20,000. “Working at Wendy’s” recounts Franklin’s experiences working the night shift at a fast-food restaurant in Provo—something he had sworn never to do.

But student budgets are tight. So when his wife decided to go back to school after the birth of the couple’s first child, Joey decided to take a night job and spend his days at home with 2-year-old Callan. Before long, Franklin found himself at the counter of the Wendy’s restaurant near his home.

As I hand the manager my résumé, I realize it is a mistake. He doesn’t want to know my service experience or my academic references or my GPA. All he wants to know is if I can spell my name correctly.

Working in fast food is not easy, Franklin soon found out. “The hardest part for me was feeling so incompetent in a job where I didn’t think I should be incompetent,” he says. “I was standing in a sandwich line with a high school dropout next to me yelling, ‘Come on, Joe! Get it right!’”

Since the restaurant he worked at was only two blocks from his house, Franklin often recognized the late-night customers. Some respected him for earning an honest wage, but others looked at him with concern. A well-groomed young man once asked in a condescending tone if Franklin had ever considered college.

I want to tell him that I’m in the top 5 percent of students at my college, that I am two semesters away from graduating, and that I’m on my way to grad school to get a PhD in English literature. Instead, I shrug and tell him the same line I tell everyone: “Oh yeah, I’m just working here until my wife finishes.” He doesn’t believe me.

While he didn’t love coming home smelling like french fries, Franklin is grateful for his experience. “All these stereotypes I had about people who work at fast-food restaurants melted away into the reality that everyone’s just doing the best they can,” he says.

“I learned that what is most important to me is not how the world views me, but how my family views me. I think as twentysomethings, we get caught up with how we’re going to make our mark in the world. And the reality is each of us will make the greatest mark between the four walls of our home.”

Read Franklin’s essay in its entirety, excerpted from Twentysomething Essays by Twentysomething Writers edited by Matt Kellogg and Jillian Quint. Copyright © 2006 by Joey Franklin. Reprinted by arrangement with The Random House Publishing Group.

BYU had its best school showing ever at the 2018 NCAA Cross Country Championships.

First Person: When You Had Class

If BYU's lecture halls could talk, here are some stories they'd tell.