By Karen Snow in the Spring 1997 Issue

Lawmakers supporting DOMA called the marriage bill a common-sense response to a lawsuit in Hawaii, which sought to legalize same-sex marriage. Advocates of same-sex marriage have used the case to threaten to compel other states to recognize such unions under the Full Faith and Credit Clause of the Constitution, a clause requiring states to recognize the legal contracts of other states. 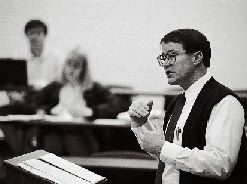 Lynn Wardle argues that same-sex unions do not provide enough benefits to society to warrant the status of marriage.

The Hawaii suit, brought by three same-sex couples seeking marriage licenses, caught Wardle’s attention in 1993 when the case progressed to the Hawaii Supreme Court. A family law expert, Wardle realized that if the couples succeeded, a deficiency in Utah’s laws might require the state to recognize the unions.

Wardle wrote a memo to his state representative, Norm Nielsen, recommending the state draft a bill to protect Utah’s right to not recognize marriages that violate strong public policy, including same-sex marriages, incestuous marriages, polygamous marriages, and child marriages. Otherwise, Wardle worried, gay couples could travel to Hawaii or any other state that legalized same-sex marriage, get married there, and then return to Utah and demand that their “marriage” be recognized.

Nielsen drafted and sponsored a bill amending Utah’s marriage-recognition law, adding an exclusionary provision by which an out-of-state marriage could be nullified due to violation of strong Utah public policies. Utah Gov. Mike Leavitt signed the bill in March 1995, making Utah the first state to pass such legislation. Since then, 16 other states have adopted similar laws, Wardle says. “I can’t think of any other time when that many states have adopted a law all together in one legislative year.”

In 1996, Wardle published an article in the BYU Law Review opposing same-sex marriage. The article caught the attention of federal legislators, and DOMA was introduced in Congress. During deliberations, Wardle was the only law professor to testify in favor of DOMA in either the House or the Senate.

Wardle refutes arguments from advocates of same-sex marriage who assert that laws denying same-sex unions deprive homosexuals of the constitutional right to privacy or to marry. “Marriage law isn’t designed for the private benefit of any person; it’s for the benefit of society,” he says. “When we pass a law, we pass a law because that law will benefit society as a whole. Society as a whole is benefitted from the union of a male and a female in ways that are not valid for unions of two persons of the same sex.”

And Wardle has a list of reasons to support his claim. First, he asserts that society’s interest in safe sex, for both physical and emotional health, support heterosexual marriage alone. Second, he points out that only heterosexual unions are capable of procreation. Third, he says, heterosexual unions provide the optimal environment for nurturing and raising children.

“Even if the homosexual couple makes more money, has better education, and provides better opportunities, they do not provide for children what a heterosexual union does,” says Wardle, who was elected secretary-general of the International Society of Family Law in 1994. “Children need to grow up knowing how to relate to both men and women. They need to see two people of the opposite sex relating to each other and getting along.”

Wardle says that historically the status of women has suffered in every society that has accommodated homosexual practice. Homosexuality is male-dominated, he says, and is practiced by about twice as many men as women.

Many proponents of gay and lesbian rights have likened rulings disfavoring homosexuals to discrimination against blacks. Wardle calls the analogy inexact. “Race is an immutable condition. Homosexual acts involve behavior and choice.” The most aggressive studies of homosexuality, Wardle says, have provided only thin evidence showing at most a predisposition for homosexual behavior, and environment has been shown to have a much larger effect than biology.

The question, Wardle says, is whether there is a civil right to engage in homosexual activities and whether there is a right to have those activities given the status of marriage. There are some actions and behaviors that are strongly preferred, he says, and the law prefers them by allowing them special advantages and status.

“Probably the very best example of a preferred status and a preferred relationship is marriage. And it’s preferred because this kind of relationship has been deemed to be so beneficial to our society and to the individuals that are involved that the law prefers it,” Wardle says.

“People who want to engage in same-sex relationships are confusing their concepts when they say, ‘If you don’t let us marry, you’re discriminating against us, and you’re intolerant.’ There’s a big difference between preferring something and tolerating something.”

The Hawaii Supreme Court ruled, in 1993, that denial of marriage licenses to same-sex couples amounted to gender discrimination under the state’s constitution. Following the ruling, the court returned the case to a circuit court for trial, ordering the state to show a compelling state interest for refusing the licenses. On Dec. 3, 1996, the circuit court judge decided in favor of the same-sex plaintiffs, saying the state failed to show a compelling state interest, despite polls that show 70 percent of Hawaii’s residents oppose same-sex marriage. The embattled same-sex marriage case has been appealed and will return to the state supreme court.

DOMA, the preemptive measure to the Hawaii ruling, does not bar any state from legalizing gay marriages within its own boundaries or recognizing same-sex marriages from other jurisdictions, but it does free other states from having to recognize such unions as lawful. Under the act, same-sex married couples will remain ineligible for marriage-status benefits under Social Security and Medicare programs or for other federal benefits now reserved for heterosexual married couples.

Kenneth L. Higbee, professor of psychology, says attributing memory loss to age is too much of an excuse.

Sommerfeldt, an associate professor of physics, is at the forefront of active noise control research.