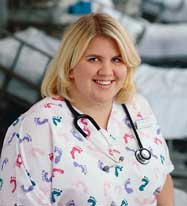 On Kristi L. Melven’s second day of nursing rotation in labor and delivery, a supervisor asked her to teach a new mother how to nurse- something Kristi had never taught nor experienced. She fumbled about for a good while with the mother and baby, who was wrapped in several layers of clothing and blankets. The supervisor returned, saw her struggle, and proceeded to peel the layers off the baby and place him skin-to-skin on his mother’s chest. Within minutes, the baby was blissfully suckling.

“It was amazing. It just came so naturally once the baby was skin-to-skin with his mother,” says Melven, 22, who will graduate with honors in nursing in December.

In February 2000 she began her honors thesis, a huge project to review all studies on skin-to-skin practice, dubbed “kangaroo care” because of the kangaroo habit of keeping babies in their pouches. The result is one of the best honors projects her professors have seen.

“It is a fabulous literature review,” says Catherine R. Coverston, assistant professor of nursing, who suggested the project as a foundation for exploring avenues for further study. Melven reviewed some 75 articles, then focused on about 50, summarizing findings and extracting compelling quotes.

Skin-to-skin contact between mother and baby for warmth and comfort is a common practice in developing countries, where incubators are scarce. “Researchers have found that when a baby is placed skin-to-skin with its mom, there are positive effects on respiratory rate and heart rate. It also enhances breast feeding and even results in less crying,” says Melven.

In Colombia, studies showed that the infant mortality rate declined with kangaroo care, and the rate of infection went down because it was less often necessary to crowd more than one baby into a single incubator. But in the United States, where incubators are plentiful, the medical profession has been lukewarm about kangaroo care. If a baby is in any distress at all, it is usually whisked away from the mother and placed in a warmer, then observed to see if the problem worsens. The most common infant distress is respiratory, though usually it is not serious.

“A lot of babies have respiratory problemsa little fluid might still be in the lungs, for example. The problem could signal something serious, like infection, but often it’s just transitory. When I was on rotation, I saw a baby snatched from her mother, and I thought it was sad. If all they’re going to do is put it under a warmer and watch it, why not keep it with the parents and let the mom be the warmer?” says Melven.

She hopes word will spread in the United States that kangaroo care is a valuable method, and she intends to do her part by submitting her literature review to a journal for publication as well as to a national conference. In her current preceptorship at Primary Children’s Medical Center in Salt Lake City, she’s helping write policy for deciding when kangaroo care might benefit mother and child.

“I don’t think it’s often that you find something so beneficial that’s so not used,” she says.

Melven’s passion for her research topic is evident, as is her love of children. Last summer, she and 15 other BYU nursing students spent six weeks assisting public health workers in Guatemala, and the children there captured her heart.

“She is great with little kids. They just love her,” says Vickie Johnsen, assistant professor of nursing and faculty advisor for the Guatemala program. “In town, they would be selling little trinkets, and they’d see her and call her by name. They knew that she just couldn’t say no to them.”

While she was in Guatemala, another of Melven’s passions, photography, intersected with her nursing endeavors. She took a Polaroid camera and created birth announcements for new mothers in the hospital.

“She made announcements with boy and girl picture frames, and then she would take these Polaroid pictures and give mothers pictures of their babies,” says Johnsen. “This became quite poignant when there was a mother with twins who were both dying of malnutrition. Kristi took pictures of the babies, and they will be the only pictures the parents have of these children.”

Melven is one of three children raised in Weatherford, Texas. She was especially delighted to go to Guatemala because her older brother went there on his LDS mission, and her younger brother left for his mission there shortly after she returned.

After graduating from BYU, Melven hopes to attend graduate school in nursing. She hasn’t decided definitively on a specialty but is leaning toward becoming a pediatric nurse practitioner. Perhaps eventually she will teach on the university level.

“Kristi has all those wonderful, caring attributes needed in nursing,” says Coverston. “I really hope she’ll get her PhD and come back and teach with us.”

This alumna is full of ideas and zeal for parenthood.