What can you do when a child expresses doctrinal doubts? 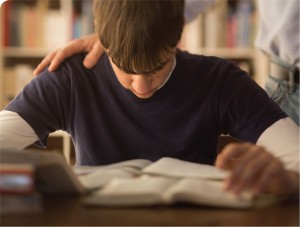 In the age of the Internet, there is no shortage of information to build and challenge faith. When a child begins to doubt, the best thing parents can do is express faith—in the child.

When Tom Puzey was a teenager, he became perplexed by arguments challenging his religious beliefs. He went to his dad, Kim B. Puzey (BS ’76, MA ’80), “in emotional anguish,” doubting all he had been taught. His father smiled, hugged him, kissed him on the cheek, and said, “This is wonderful.”

Then his father told him, “It’s okay to question. . . . You’ll figure it out. And Tommy—you’re going to be okay. I promise.” Tom recalls, “I believed him.”

Kim and his wife, Julie Romney Puzey (’81), are among the many LDS parents who find their children (or other loved ones) asking difficult questions. These uncertainties can lead to family tension, weakened faith, and angst of the soul—or to stronger family relationships, deeper faith, and peace of the soul.

Fluhman and Cope say they have seen an increase in distressed students coming to them with tough questions. Both suggest that parents—and all Latter-day Saints—become more prepared to discuss hard issues of faith and less afraid to engage in open dialogue.

“If parents are fearful of the questions, that could feed the crisis because it implies something’s wrong,” says Cope. “If they can’t even go there, their children will assume there must be a real issue. There needs to be less fear and more willingness to talk.”

Latter-day Saints have experienced crises of faith throughout the history of the Church, but the number of those asking hard questions or finding themselves in faith crisis has increased with the advent of the Internet, Fluhman says. “The information explosion has exposed Latter-day Saints to a wider range of information about their faith and about their past.”

Cope has found the same situation. “More students are coming across information on the Internet that they haven’t been exposed to before,” she says. “They do not know how to process these new details and in many cases feel a betrayal of trust. ‘Why hasn’t anyone ever told me this?’ they ask.”

A few years ago, Fluhman had a student who was “undone” by what he found on the Internet and thought he had to work out answers to his questions before he could consider himself a “real” Latter-day Saint. Fluhman told him that his questions did not make him a second-class member of the Church, but rather, he told him, “you belong with us in your doubt. We want you here. You are us. We are you. We’re all in this together. We’re all at some level of spiritual understanding with imperfect faith.” Fluhman says he saw relief come over the student’s face. “I could see him realize that ‘ok, my questions don’t disqualify me.’”

LDS culture tends to communicate disapproval of doubt, say the professors, sometimes to the point of causing someone with questions to feel that he or she is unfaithful or unworthy. If someone musters the courage to raise a question with parents or friends and is met with shock or disgust, he or she is often left feeling alone.

“If they can’t find an open, candid, and supportive place to work through honest questions, that’s tragic,” says Fluhman. “We stigmatize doubt to the point that people feel guilty for even having the questions. That’s not conducive to spiritual growth.”

How parents react to questions can determine whether a child experiences faith crises within the faith or turns to those outside the faith for answers. Fluhman advocates that parents celebrate questions from their children and also allow room for doubt: “Doubt creates space for faith to exist. Faith has no meaning without doubt. We have to make peace with that as a people. To have faith is to experience, at some point, its alternative, its opposite. It makes the life of faith so rich and rewarding. I think we need to be done pathologizing doubt.”

One of the most heartbreaking aspects of faith crises occurs when people with questions begin to question themselves instead of the information they’re considering, says Cope. She and Fluhman recommend that parents create an atmosphere that encourages questions, as does the Church’s new youth curriculum. The Puzeys did this with their six children, and Kim says they learned together: “Humans are on a journey of discovery. We have nothing to fear. Our views, witnesses, and opinions are all subject to change and adaptation, and our mortal lives are verbs, not nouns. Only the damned have ‘arrived.’ Everyone else is still a work in progress.” This approach gave the Puzey children freedom to explore and cultivate their faith within a context of acceptance and unconditional love.

Tom Puzey says his father employed a simple method to make sure every child had a daily opportunity to talk with him one-on-one. “My father has always been easy to talk to, especially about things that didn’t have easy answers or topics that weren’t quite black and white. All you needed to do was say, ‘Me!’ when he announced early each morning to the family that he was going on a walk and asked, ‘Does anyone want to come?’”

Parents of children in this age of information have a serious obligation to be as informed as possible, say the professors. Parents don’t have to be academics or have all the answers, but they can be conversant in the issues that come up most frequently. The Church recently began expanding and revising www.lds.org/topics to address complex topics more candidly. Recent additions include “Race and the Priesthood” (lds.org/topics/race-and-the-priesthood) and “Accounts of the First Vision” (lds.org/topics/first-vision-accounts). For issues regarding same-gender attraction, the Church has created the website mormonsandgays.org, which includes statements from Church leaders as well as first-person accounts of men and women who are experiencing this challenge in their lives.

Cope and Fluhman recommend that parents become familiar with these documents and introduce them at appropriate times to their children. “As parents understand these issues, they can solve a lot of problems before they even start. Teach them about being seekers and interpreting and processing things,” says Cope.

As parents keep current on issues that could raise questions for their children, they might find themselves asking questions as well. Just like their children, they will need a sympathetic listening ear. Fluhman recalls a phone call with a parent who had recently learned about Church historical events of which he had not previously known. “He said to me, ‘How could I be a high priest and serve all these years and never know this?’ We talked for a long, long time that day. At the end of the whole experience, he’s still in the Church. He just needed someone to say, ‘This is legitimate. Your questions are real.’ I didn’t resolve his question. There was no silver bullet. But the bristling he had at the beginning was gone. He felt valued. He felt like he was heard.”

Fluhman and Cope suggest ways you can support a loved one who is asking difficult questions or expressing doubts.

Do create an atmosphere of warmth and openness in your home that invites conversations on difficult topics of all kinds.

Do react matter-of-factly and kindly to questions, no matter how distressing they might be to you personally.

Do acknowledge what you don’t know. Ask if you can join your child in his or her search for answers.

Do encourage mutual respect. Just as you expect yourself to listen respectfully to your loved one’s thoughts and feelings, it’s reasonable to expect him or her to speak respectfully about what is sacred to you.

Don’t shut down a child who has a difficult question. Even remarks that might seem innocuous, such as “Where did you hear that?” can be interpreted as disapproval of the question itself.

Don’t communicate that it’s wrong or unfaithful to have questions or doubts.

Don’t express disappointment in your loved one or convey fear about his or her spiritual standing.