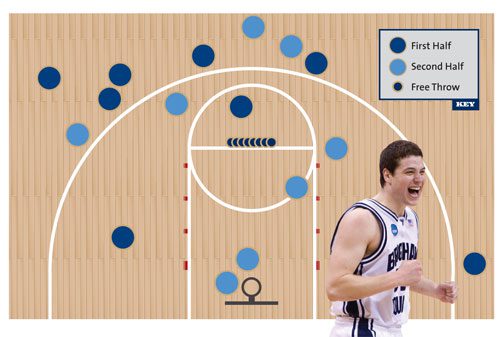 In BYU’s late-December 99–69 win over Arizona, junior point guard Jimmer T. Fredette (’11) put on an offensive show, scoring 49 points and setting the BYU record for the most points scored by an individual player in a game. His stunning array of free throws, three-pointers, and two-pointers are pictured here—the circles mark where he made each shot. With nine treys, Fredette also broke the BYU record for most three-pointers made in a single game by an individual player.

His nickname, Jimmer, stuck like velcro. Now, everybody knows his name. And his game.

How many games of H-O-R-S-E and 21 and Around the World can be fit into a childhood?

One team, three conference players of the year, and the no. 3 scoring offense in the country.