Janie Thompson to Headline at Homecoming ’99

By Charlene Renberg Winters in the Fall 1999 Issue 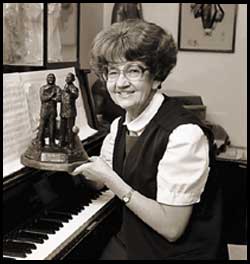 She never had a voice lesson, although the talent was clearly there. She had only two years of formal piano training, although her innate musical abilities were evident as a child. And she never took a production class, but she became legendary at BYU for larger-than-life shows.

Janie Thompson’s lack of formal training never slowed her down–she has embraced music and entertainment all her life. Thompson was the tornado who energized BYU’s performing arts program in 1952, and she remained a whirlwind director/producer/ entertainer until her retirement in 1984.

Thompson will be featured throughout Homecoming as a symbol of the 1999 theme, “Light on a Hill.” Not only will she warm up her vocal pipes to entertain during the Homecoming Spectacular Oct. 7 and 8, but she will also serve as grand marshal of the Homecoming parade Oct. 9, and on Oct. 10 she will speak at the fireside that concludes the week-long festivities.

In a year when former BYU president Ernest L. Wilkinson is the university’s Founders Day honoree, it is appropriate that Thompson be showcased as well. It was Wilkinson who lured Thompson from her big band career with Ike Carpenter and challenged her to redirect her musical gifts toward supporting the talents of students.

Thompson’s career included a stint singing with Tony Bennett, and in his autobiography, The Good Life, he wrote, “Janie was loaded with energy and excitement, and she really thrilled the crowds when she launched into a boogie-woogie number and accompanied herself on the piano.”

She also completed a two-year singing tour in Europe and was a featured soloist in Los Angeles with Carpenter. After interrupting her career to serve an LDS mission in Wales, she had returned to California and arranged an interview for her old job with Carpenter when she received the call from BYU that changed her life.

Her charge was to lead an organization called the Student Program Bureau, and she did it with a no-holds-barred enthusiasm that has characterized her approach to music all her life. Within four years, she had put together 2,463 shows–all while serving on the general board of the Young Women’s Mutual Improvement Association for the LDS Church.

“I found myself going night and day with very little sleep,” she explains. “But I was big and strong and didn’t think a thing about it. However, by late 1956 I nearly collapsed with a nervous breakdown.”

Her solution was to leave for the comparatively easy pace of New York–a city she loved. But when Wilkinson called again in 1959, she returned, thinking she was going to bury herself in Provo.

She might have been based in Provo, but she was certainly not buried. Within a year, the world became her campus as she put together groups for tours with the U.S. Defense Department and later with the Department of State. In a little more than a decade, her “kids,” as she liked to call them, had performed around the world.

All in all she created six touring shows. Two of them–the Young Ambassadors and Lamanite Generation (now Living Legends)–are still thriving in BYU’s School of Music.

“Janie never does anything halfway,” says Norm Nielsen, president of the SCERA Corporation in Orem, Utah, and a former tour manager for Thompson. “Her entire focus was to give kids opportunities. Although she sometimes got the spotlight, that was not her intention. She nurtured talent, and, not surprisingly, many of her kids had show business careers.”

BYU University Communications writer Cecelia Fielding described the entertainer by saying, “Anyone who tries to bottle the essence of Janie Thompson is going to have a hard time capturing all the bubbles.” Former students say that at 78, Thompson’s irrepressible energy is still evident whenever she holds a microphone or sits down in front of a piano.

Sometimes scored for the company he keeps, Jack Sites has warmed others' interest in cold-blooded creatures.

Not Your Average Joes