By Marilyn Nelson Nielson ’02 in the Spring 2002 Issue 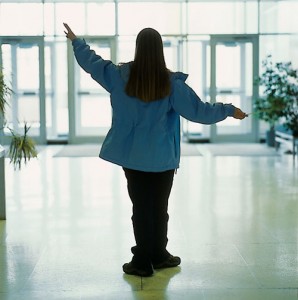 Marilyn Nielson knew college had changed her when, like other music majors, she began directing invisible choirs.

My last name is Nielson. Until my marriage a year ago, it was Nelson. I told my brothers, who were horrified at my defection to the Nielson camp, that it was actually an improvement–that we Nielsons, like President Gordon B. Hinckley speaking to other faiths, invite the Nelsons to “bring all the good that you have and let us add to it.” Still, I couldn’t deny that it was difficult. I had spent my whole life “N-E-L-S-O-N“-ing to secretaries, clerks, and teachers, secretly pitying the elongated Nielsons. At least, thank heavens, I only had to add an i and not change my o to an e.Actually, it’s fitting that my name change was so slight. The i was just an addition to what I already had. And that, I’m realizing, is how changes in my life usually come–as extensions, not alterations. It’s a surprising discovery. Before coming to BYU I had a vague idea that I’d be able to identify the point at which I changed into an “educated person.” Something would be drastically different. I would acquire a photographic memory, a slightly British accent, and the ability to raise one eyebrow.Now, suddenly, I’m a senior music major in college, and I’m realizing that I have become more educated–but I’m still just me. It’s very mysterious. I can think of various starting points: when I started trying to sing all the different parts to the hymns in sacrament meeting; or when I spent five puzzled minutes lurking outside the door of what I was sure had been my classroom for six weeks, but had now suddenly been transformed into a computer lab. When did things change? Somewhere along the way, I learned to hear four-part harmony, and I learned how to tell what floor I was on in the JKHB. Eventually, I didn’t even have to think about these things anymore–they became part of me. I’m still me–but “me” has come to mean something more than it used to. Like my last name, I have been added to.I suppose that what I thought would be metamorphosis has turned out to be more like evolution. I’m a little more developed, a little more secure. I’ve never considered myself a shy person, but now I’m more likely to introduce myself to others in my classes. I’m less likely to keep questions to myself because I’m afraid I’m the only one who’s confused. I’m more likely not only to state my opinions but also to form them consciously after thinking about both sides of an issue.On top of that I find myself doing some things I never thought I’d do. I never thought I’d be one of those music majors who walks around conducting invisible choirs or singing, but when finals were coming up in conducting class, I found I no longer had any shame. Nor did I when my friend Rachael and I learned of each other’s engagements–we shrieked and hugged just like every other pair of giddy girls.There’s more. I always wanted to see the inside of the Carillon Tower, but I didn’t imagine that I’d learn to play the carillon. Now I’ve practiced many hours on those bells, making mistakes for the whole world to hear. I’ve played “O Come, O Come, Emmanuel” on them, perched high above the deserted streets on a snowy Christmas Eve. I’ve taught at the same BYU preschool where my mom taught. I’ve shaken President Hinckley’s hand.After four years I’m not a new person, but there are more sides to me now. My testimony is not new, but it is stronger. My love of music is not new, but it is deeper. My interest in literature is not new, but it is more personal. I love the way BYU facilitates this kind of change in the lives of its students. Our classes allow us to grow, to be added to, without completely re-forming ourselves. I haven’t had the time or talent to transform myself into a singer, a folk dancer, or a florist–but I have been able to add to myself a little by taking University Chorale, Social Dance, and Floral Design. I haven’t been able to dive into everything that interests me, but I’m grateful I’ve at least been able to dangle my feet in the water.I’ve already become Marilyn Nelson Nielson, wife. Soon I will become Marilyn Nelson Nielson, BYU graduate. Over the years I will become many other things, too. But whatever happens, I’ll know that, like my last name, I won’t have really changed–I will have been added to.

A Team of BYU researchers uses a new method to scribe lines on a silicon surface using an atomic-force microscope.