By Charlene Renberg Winters in the Summer 2000 Issue

As a youngster, the closest BYU alumna Thella Wilson Brock came to being involved with the FBI was looking at the “Wanted” posters on the walls of the Roosevelt, Utah, post office.

There was nothing in her childhood to suggest that she would ever get more involved than that. She grew up in the economically depressed 1920s and ’30s in Tridell, a tiny eastern Utah community surrounded by great spreads of sagebrush. And if the shy child thought of the FBI at all, it was to regard the agents as “hero-types.”

Little did she know that her sun-splashed memories of the small town would become a wistfully remembered counterpoint to another life that lasted for more than two decades. From 1958 to 1979 she and her husband, Dan, helped the FBI infiltrate the activities of the Communist party in Los Angeles. 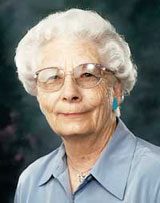 Brock came to BYU in 1940 and majored in home economics. She met her husband during World War II in Ogden, Utah, where he was working as a non-commissioned officer in the signal corps, and in 1944 they married and moved to California. (Brock then lacked a year of her degree; she finished her BA in home economics at California State University–Long Beach in 1969.)

In the 1950s Brock was living with her husband in Los Angeles and raising five children. Money was tight, but the home abounded in love and religious faith. In fact, when FBI agent Lee Meyers first visited the Brocks on Jan. 16, 1958, Thella had just left to take her children to Primary. Meyers promised to return, and although the couple tried to figure out what he wanted, they concluded it could not be too important.

“Dan was a professional photographer, and I was a housewife,” Brock explains. “I had never attended political meetings. What could he want with us? We just shrugged and had a good night’s sleep.” The Brocks later deduced that the FBI had identified them from an earlier experience, when they had turned in a Communist pamphlet given to them by a neighbor’s twin sons. At the time the FBI said it had been looking for that family for five years. “Our neighborhood became known as Red Gulch,” says Brock’s second oldest son, Larry, “because there were many Communists living in the area.”

Jan. 16, 1958, turned out to be the last good night’s sleep the Brocks would have for many years. Meyers returned the following day and asked them to find information about subversive people and activities in the city. He explained that he needed help keeping track of people who opposed the U.S. government. He was asking them to do intelligence work, something Brock says is necessary in any war—wrongly assumed unnecessary in a cold one.

“I was blown away by the request,” says Brock. “But you don’t think of saying ‘no.’ We didn’t hesitate and said we would do what we could. But the FBI certainly cracked the mirror of our lives. We wondered how we would protect our family. We even wondered if we could have additional children.” (Two more babies were born while they were “in the work.”)

Such a life called for a low profile, or as Brock depicts it, “Isolation! Silence! Conflict!” It required two distinct lifestyles. The first was as committed parents determined to keep their family separate, safe, and out of the web of Communism. The second was as trusted party members who followed up every meeting with reports to the FBI. She says she learned firsthand that pretense is very hard work.

“The FBI told us to hide our scriptures and take the temple pictures off the wall. Neither our parents, children, nor friends—in fact, only our stake president—knew that we were inside a privileged circle of Communists in Los Angeles,” Brock says. “We had many late-night blessings from our stake president to help us through it. We prayed and asked to keep our two lives separate. Constantly we were both blessed. Living this kind of life makes it harder to keep your values straight, but we were blessed to see the end from the beginning.”

One of her younger sons believes the children had a veil of sorts around them. “We never questioned why Dad had 50 copies of the Communist Manifestoin his studio. We just figured he was interested in history. We never questioned the meetings Mom and Dad always attended and never asked why they weren’t more involved in Church callings. Only in retrospect could we see what was going on.”

Taken in 1958, these photos of Dan and Thella Brock were used for their FBI identification.

“It was our habit to call the children to prayer just before we left for a meeting,” says Thella. “I called it a tiebreaker between the two worlds. Home was sacred ground, and our prayers gave us a cleaning of the minds.”

“I found out about my parents’ activities when I left for my mission,” says Larry Brock. “My older brother found out when he left for his mission, too. We were both told that if anything happened to our parents, we were not to come home. It would be too dangerous.”

Brock described her double life in her book Operation Housewife: FBI Informant, which received the 1998 Quill Award from the League of Utah Writers. She was honored for service to her government, her family, and her church at the BYU Emeritus Association annual meeting in March.

Brock puts her 21-year government mission in perspective by explaining that it began during the frenzy of the Cold War and ended as the country became more liberal. She recognizes that many people no longer remember how threatening the specter of Communism once loomed and that many do not recognize the value—in her mind, the imperative—of being politically involved today.

“Most readers today cannot remember when problems of national security dominated daily news and when adherents to foreign philosophies of government worked night and day imposing Communism on people in other lands,” she writes in the preface of her book. “People seeking to change or overthrow our government operate under laws that protect their freedom to do just that. However, it is just as legal and just as necessary for the government to know who its enemies are, their plans and modes of operation.”

As party members who reached the “inner circle” in a short two years, the Brocks saw how Marxism was woven into action items—including unions preparing to strike, labor contracts, demonstrations, and especially the civil rights movement. “I saw party members lay the foundation for police brutality charges and level those charges at decent, honorable people,” Brock says. “It was hard sometimes to keep my mouth shut and simply work with the FBI agents—14 in all—who seemed extremely appreciative of our work.”

Brock says she learned to love the people in the party and felt bad when personal tragedies hit some of them. But she never wanted to be like them.

“I felt fear being among the members of the party,” she says. “Near the end, however, when the nation was growing more tolerant of liberal ideas, the danger was remote.”

Now that she has her freedom of speech back, Brock, a widow, is actively involved in her political party. She just finished a term as vice chair of the County Republican Women in St. George, Utah; she is also a longtime member of the Federation of Republican Women and the Heritage Foundation.

And the woman who was not called to be a visiting teacher for 29 years has served an LDS mission in Boston and is now the Relief Society president in a large congregation. Her skin finally fits. She embraces the right to practice her religious and political beliefs openly and actively.

“Don’t ever get into pretense work if you can avoid it,” she advises, then adds, “If I were asked to do this again, though, I would.”

A $10M Boost to Global Engineering and Technology

Thirty-nine colored-in masterpieces made it into our inbox. Four emerged victorious.