By Merrill J. Bateman in the Fall 2001 Issue 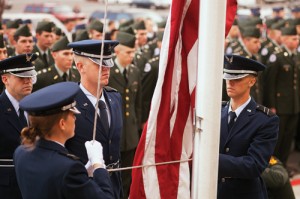 In a prayer meeting Sept. 11, BYU president Merrill J. Bateman spoke of the national tragedy and of the peace that comes through the gospel of Jesus Christ. “Even though we live in troubled times,” he said, “it is possible for each of us to feel peace.”Editor’s Note: On the morning of Sept. 11, 2001, tragedy struck the United States as hijacked airliners crashed into the World Trade Center, in New York City, and the Pentagon, just outside Washington, D.C. As TV stations showed images of billowing smoke and commentators made comparisons to Pearl Harbor, more than 17,000 BYU students, faculty, and staff gathered in the Marriott Center for a prayer meeting in place of the regularly scheduled devotional. BYU administrators have received many requests for the text of President Merrill J. Bateman’s speech on that occasion. Below is an edited version of his remarks. This text will also be published in the fall 2001 issue of BYU Magazine.

President Bateman has noted that to his knowledge, no BYU students or employees have had their lives endangered in this incident.This morning, as most of you know, one of the greatest tragedies that has occurred on the mainland of the United States took place. Thousands of lives have been lost, and thousands have been injured. The most important counsel that we can give this morning, I believe, is three-fold.The first is there is no reason to fear for our lives or the lives of our loved ones if they weren’t in those towers or the Pentagon. We suspect the terrorists are hoping for panic. With the exception again of the Pentagon and the World Trade Center, we believe there are no other areas of danger.Second, it is extremely important that we be respectful of all people. When the Oklahoma City federal building was bombed, there was considerable speculation early on as to who might have been responsible. In the end those speculations were incorrect. We ask all of you to be respectful of every single person that you meet and contact here on campus and elsewhere.Third, the best news of all is the good news. It’s the gospel of Jesus Christ. Even though we live in troubled times–and prophets have indicated that there will be turmoil in the last days–it is possible for each of us to feel peace, to have the peace of the gospel in our lives. We believe that is the most important message we have for the world.We are part of the greatest peaceful mission this earth has ever known. The 60,000 missionaries and 11 million members of the Church have the only message that gives hope for peace. And peace will not come in the lives of people until they have internalized the message of the Master.Let me turn to the words of the Savior. At the Last Supper, after finishing the meal, the Savior and his disciples sang the Hallel. The words of the Hallel are from Psalms 113 to 118. Chapters 113 through 116 are sung before the meal, in which they thank God for their deliverance from Egypt; chapters 117 and 118 are sung after the Passover meal. I invite you today to read those chapters in Psalms. Those chapters talk about being saved from death. They’re talking about the Atonement. And there Jesus is–now with 11 disciples, Judas having left and Jesus knowing where he was going–singing about his own death.In that setting he then went on to talk to them about the most precious gift he had to give them. And that gift was the gift of the Holy Ghost. These are his words: “But the Comforter, which is the Holy Ghost, whom the Father will send in my name, he shall teach you all things, and bring all things to your remembrance, whatsoever I have said unto you” (John 14:26).And then he said, “Peace I leave with you, my peace I give unto you” (John 14:27). He knows where he is going, and there is peace in his heart. He knows he is going to the garden, and he is going to the cross. He’s telling them he’s leaving them his peace.“Peace I leave with you, my peace I give unto you: not as the world giveth, give I unto you. Let not your heart be troubled, neither let it be afraid” (John 14:27).Brothers and sisters, that’s our message this morning. Fortunately, this is only the second act of a three-act play. Even when death comes to those we love, we know what lies ahead. We know they’re fine. It’s those of us who are left behind who are sad. And we know we will see them again. We know we will be with them. When death comes to someone who has the peace of the Holy Ghost inside, it can be sweet, not bitter.Do you understand why you young people hold the power of peace for the world in your hands? The world depends on you.Many of you have just returned from missions; many of you will go next year. The world’s peace is on your shoulders because you have the only message that gives hope for eternal peace.

To receive updates of BYU addresses, athletics, and other news, visit today.byu.edu.Readers may submit personal essays between 600 and 800 words long for After All.

Building a World of Peace

Peace is possible according to Jehan Sadat, former president of Egypt.

The Lord’s Plan for Peace

As we deal with our challenges, temptations, pain, and sorrows, we learn to appreciate goodness, virtue, and happiness.

What is going to happen to us in the 21st century?