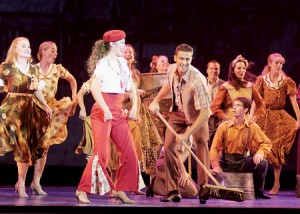 IF audiences in the Marriott Center detect a hint of the jungle at Homecoming Spectacular Oct. 17 and 18, it will be because the Young Ambassadors are introducing the Homecoming theme by way of the Broadway hit The Lion King.The musical contains a major production number where the spirit of the lion Mufasa visits his son, Simba, and explains that he continues to live through Simba.“When we realized the song deals with the idea of passing on to next generation the values and traditions of the parents, we knew we had an idea that ideally supports the 2002 Homecoming theme, ‘Alive in You,'” says Janielle Christensen, ’67, artistic director of the show.“Homecoming is a time for reflecting on the past and looking forward to the future,” she adds. “We have been sensitive to that idea as we have produced the Spectacular, and we hope that audiences will enjoy the messages and values it contains.”As has become traditional, the evening will showcase the talents of several student performing groups. In addition to the Young Ambassadors, the popular Men’s Chorus will be part of the festivities.Because Founders Day and its honoree are such an important part of any BYU Homecoming, producer Michael Handley, ’83, will coordinate a multimedia presentation during Spectacular honoring Benjamin Cluff, the principal of Brigham Young Academy who became the first president of Brigham Young University.The theme will be reflected in other Homecoming events, including the Brimhall Essay contest, the Homecoming parade, the alumni barbecue, reunion activities, and opening ceremonies.“What is ideal about ‘Alive in You’ is that it not only links us to a heritage reflected in the traditions we still honor, but it also points to the tradition-building effect each of us has on future generations,” says John C. Lewis, ’77, Homecoming executive producer.INFO: alumni.byu.edu

A World of Play for Zachary

Natalie Blakemore spent four years leading a community effort to create a playground for all children.