By Charlene Renberg Winters in the Fall 2000 Issue

Brigham Young University will observe Homecoming in October as “A Sterling Celebration: 125 Incredible Years.” The events will commemorate BYU‘s 125-year history and recognize its Founders Day honoree, Jesse Knight, who was a great benefactor to BYU in the early 20th century.“With the BYU anniversary, we trace the university’s progress from humble beginnings and financial struggles to worldwide influence and significant use of technology and distance learning,” says John C. Lewis, BYU associate advancement vice president and head of the Homecoming 2000 committee. “In Jesse Knight, we find an industrious, willing servant who provided needed resources at crucial times in the university’s history.”The festivities will begin with a combined Founders Day commemoration and Homecoming opening ceremonies in the Marriott Center Oct. 17 and conclude Oct. 21 with a parade, football game, dances, and Spectacular. The week will also include alumni lectures, an alumni barbecue, and student activities. More than 20 groups will converge on campus for reunions. 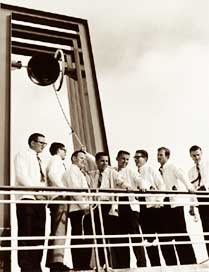 Homecoming 2000 will mark the 75th anniversary of the College of Fine Arts and Communications, the oldest fine arts college in the West. In honor of the anniversary, several performing groups in the college will be featured at the Spectacular: the Philharmonic Orchestra, Men’s Chorus, Young Ambassadors, and Dancers’ Company.Homecoming also provides an opportunity for the university to honor outstanding alumni. Five Distinguished Service Awards and two Service to Family Awards will be presented.Among the annual Homecoming events is an essay contest, and the student with the winning entry will read his or her essay at the opening ceremonies. Also planned for the opening ceremonies are comments from BYU President Merrill J. Bateman, football coach LaVell Edwards, and representatives of the Jesse Knight family.Every afternoon during the week of Homecoming, BYUSA will sponsor performances by groups slated for the Spectacular. The student association will also sponsor a hike up Y mountain, a baby pageant, True Blue Football, dances, a parade, and a free pancake breakfast along the parade route.The online homecoming calendar outlines the schedule of Homecoming events. For changes and updates, call (801) 422-4000 or visit the Alumni Association Web site (https://alumni.byu.edu).

A Sterling Achievement For a BYU Great

The survival of a free society depends upon its citizens.