Helping BYU dominate the season at no. 1 were two 2013 first-team American Volleyball Coaches Association (AVCA) All-Americans: Taylor L. Sander (’14), a seasoned player with a résumé that has long included Team USA, and Ben M. Patch (’18), a rookie turned AVCA Newcomer of the Year. This duo can make kills from just about anywhere on the court, says AVCA Coach of the Year Chris J. McGown (BS ’94). Get to know BYU’s hit men. 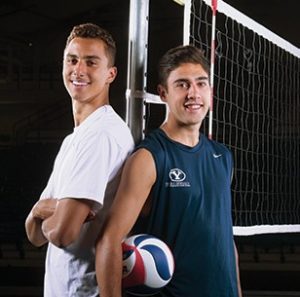 Will Ben Patch and Taylor Sander play together for the stars and stripes?

Ben Patch started volleyball at 14—practicing with the Provo High girls’ team and with a devoted bishop. The 5 a.m. training sessions with the bishop, a former pro, helped the 6-foot-8 Patch increase his vertical (now 41 inches). Though Patch got scattered experience on club and junior national teams, he never thought he’d play at the collegiate level.

BYU coaches, however, knew better. After seeing Patch play on a high school team, Coach McGown snatched him up, thinking Patch would suit up for the Cougars after redshirting and a mission. Instead Patch started all but one game and earned MPSF Freshman of the Year. “We knew he was going to be good,” says McGown—just not how good.

Patch will leave on a mission this year. But Sander expects to play with Patch again. “[Patch] is going to be on the USA team whether he likes it or not,” says Sander. “He’s that kind of player.”

Taylor Sander was on the court by age 6. From junior national teams to BYU, where he became the first Cougar to earn MPSF Freshman of the Year, he’s hit some major milestones. The biggest: he was the only nonprofessional athlete on the 2012 U.S. Men’s National Team at the Pan American Cup—oh, and he was named the tournament’s MVP.

He has a knack for aces (he owns BYU’s all-time record) and kills. “Taylor will find a little seam somewhere to exploit,” says Coach McGown. “It just drives all of the defenders crazy.”

Thus he was crowned the 2013 MPSF Player of the Year.

The star of the BYU team since starting as a freshman, Sander has become a mentor to his teammates—especially to Ben Patch. “In every aspect of my game,” says Patch, “I don’t think I’d be playing the way I am without him in the gym.”