Nancy Ehlen Oakes (BS ’83) anticipated she would have a wonderful time on her BYU Alumni Association tour to Church history sites. What she didn’t expect were the lasting friendships her children formed on the bus and the testimonies they bore when they returned home. 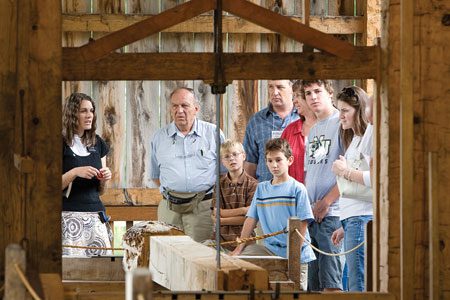 Members of the Wessman and Oakes families tour a sawmill in Kirkland, Ohio. The two families met and created lasting friendships during their nine-day Alumni Association Church history tour, which included the Joseph Smith log home in Palmyra, N.Y.

“It was a life changing experience for all of us,” she explains.

The El Cajon, Calif., mother and her husband, Robert E. Oakes (BS ’85), had saved “a long, long time” so seven members of their family could experience the sacred sites firsthand. After flying to New York, the Oakes traveled in a motor coach for nine days with nearly 50 other people intent on learning more about the early Church. The group’s stops included Palmyra, N.Y.; Kirtland, Ohio; Independence, Mo.; Nauvoo, Ill.; and areas surrounding these destinations.

“What I liked were the many different sites we got to see,” says Paul Renberg of Meridian, Idaho, who was on the same tour as the Oakes. “On my own, for example, I might not have traveled from Kirtland to the John Johnson farm. I would have thought it was just some old farmhouse. But when I got there and learned what happened there, I realized this is a significant place for teaching and for revelations—and it is an important part of early Church history.”

His wife, Janine Scott Renberg (’78), agrees. “I love old graveyards, and I was thrilled when our guides took us to the pioneer cemetery in Nauvoo. I had not known about it, but I felt a real spirit there.”

The Alumni Association created tours to Nauvoo and surrounding areas in 2002 prior to the Nauvoo Illinois Temple dedication. “We wanted as many families as possible to be able to see the temple, and we wanted to make it easy for them,” says Reid A. Robison (BA ’75), a former manager of alumni services who is now serving as a mission president in the West Indies. “It was so successful we added Church history tours to our alumni offerings for both summer and autumn. We also provided a detailed study guide and guest speakers along the way who could share specific knowledge with the group.”

“We have found as we talk to our tour participants that the sum is greater than the parts when they travel as a group,” says J. Michael Busenbark (BA ’72), who administers the alumni tour program. “They return with much more than any one individual or family would have gained on their own.”
“I appreciated the different perspectives on the bus,” Paul Renberg says. “It seemed as if everyone had a different reason for being there. Not only that, I learned a lot of things I had not thought about, and I appreciated both the questions and the answers.”

“On a tour, you are able to find real gems of information,” Nancy Oakes says. “It brought a lovely spirit.” 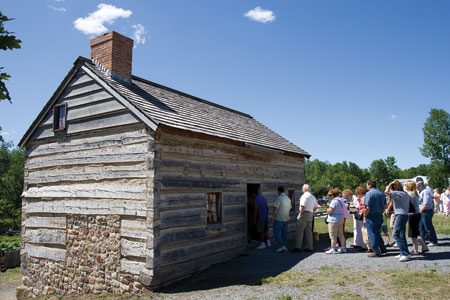 For Natalie Winters Lewis (BS ’02) of Cheyenne Wells, Colo., her tour was enhanced because she did not have to drive through the traffic or find the sites on her own. “Our tour hosts created a great schedule,” she says. “Having a group was nice, yet you could still have alone time, such as in the Sacred Grove.”

Oakes considers the trip an excellent deal. “With our large group, we compared costs extensively, and we could not have gotten a better deal as to what we wanted to do in the time we had,” she says. “We felt it was a concentrated trip, but we did it with very little sweat and were able to focus on the experience. Our family loved this.”