His Hands, Her Eyes

A determined couple with disabilities meets the challenges of school and life together. 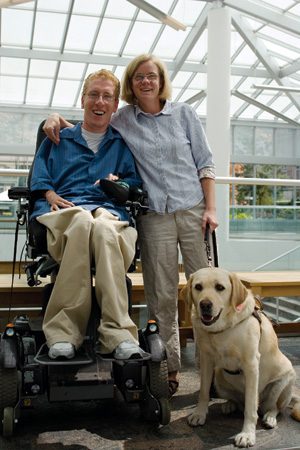 When Tyler Briggs (’07) first saw transfer student Tara Wiseman (’08) bumbling around a campus computer lab, pestering lab assistants about her files, he said silently, “Now there’s the world’s most uptight person.”“I thought to myself, ‘I hope she makes it. She drives me nuts, but I hope she makes it.’”
She was similarly put off by him. “I can’t recreate it, but he said in this weird voice . . . ” she prepares a deep, drawn-out voice to convey the creepiness, “Hello.”
“I thought to myself, ‘You are weird, buddy. I don’t know who you are, but you are strange.’”
They have good timing and delivery. How-we-met stories are, after all, the most requested of engaged couples.
It wasn’t long before the two adjusted their first impressions. They started talking one day in March after Tyler finished his shift at the University Accessibility Lab. They discovered both were born preemies—each weighing exactly 2 pounds, 4 ounces.
Since birth, both Tyler and Tara have lived with a disability—he has arthrogryposis and muscular dystrophy (which causes twisted joints and weak muscles) and she is legally blind (she can perceive light and shapes with one eye, but no details).
“We both thought, ‘Well, how on earth would a blind person and a guy in a wheelchair work out?’” Tyler says.
Their answer came after dating. They found they could have fun without always watching movies—Tara finds most movies exceedingly dull anyway. They found she could feed him ice cream without too much of a mess—though there was the time he wasn’t paying attention and she accidentally fed him a lemon wedge. He still kids her about that one. They have fun together.
“He’s my eyes and I’m his hands,” Tara says.
Like all well-matched couples, Tyler and Tara have common interests and backgrounds (both were raised in Utah by LDS families), but even more important, they complement each other’s strengths and weaknesses.
Both are extraordinarily capable in their studies and work and say their success is largely made possible by technological modifications. Being employed at the University Accessibility Lab has given them a broad appreciation for how adaptive tools can help people with disabilities.
Braille allows Tara, a history teaching major, to read. She’s teaching it to a professor who is losing her sight. Computers allow Tyler to write faster than he could with pen and paper. Tyler uses a wheelchair and Tara has a guide dog named Honny.
Still, the two can ask for help when they need it.
“Here at BYU there’s such a great atmosphere, I feel very comfortable,” Tara says. When there was no bus that went from Provo to her flute teacher’s house, members of her student ward took turns driving her.
Tyler, who is studying microbiology, says he started falling behind in his organic chemistry lab and was afraid to approach his professor. “I’ll forever be grateful for that professor,” Tyler says. “She was completely understanding. She didn’t ask questions but said we’d make modifications.”
He not only finished the lab but went on to take the classes necessary for a chemistry minor.
Both are excited for their May marriage in the Salt Lake Temple, and they’re also looking forward to the future. Tyler intends to get a master’s in genetic counseling and hopes to be employed in a muscular dystrophy clinic. Tara fancies becoming the first blind Suzuki method flute teacher. Together, they hope to have a family and a fairly normal life.
“Life with a disability is just like everybody else’s.” Tara says. “It just takes a little bit more determination to get through.”

Becky Reeve, left quadriplegic after a car accident, learned to “walk by faith”—and to walk again on her own.

When Love is Why

In the end, why we do things may be more important than what we do. What if love were our only motive?

A Place to Belong

A family advocates for children with special needs and their families after having a daughter with Down syndrome.