Helping Hands: A Century of Industrious Students at BYU

By Erick Carlson in the Winter 1999 Issue 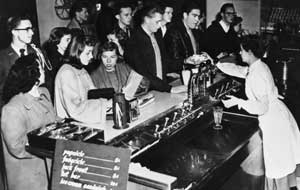 From sweeping floors to correcting tests to dishing out ice cream, student labor has provided much of the effort necessary to keep the BYU machine running.

It is a Saturday morning sometime in the 1930s–5 a.m. Prompt. The bleary-eyed student employees of custodian Brigham Thomas Higgs huddle in front of the Education Building for a meeting, hailed by the ring of the Y bell. The purpose of their gathering is less for custodial concerns and more for philosophy, but they come faithfully, every Friday afternoon or Saturday morning.

“This living is a laborious thing,” said Higgs on one such occasion, “but you can make it a pleasurable thing if you will look after the little details that build up the structure. You cannot build any other way and get joy out of anything that you had not some hand in building. You do not understand it, and you cannot appreciate it. You cannot see the underground workings of it” (“A talk given by B. T. Higgs to a group of college students who are doing janitor work in the Brigham Young University,” Dec. 18, 1936, Higgs Family History, Harold B. Lee Library Special Collections, BYU).

When the meeting ends, the students file off to their shovels and rakes and mops and brooms to attend to the little details that build up the structure called Brigham Young University.

Perhaps none more than the droves of students who have been employed on BYU grounds and custodial crews–those crews that put in early and late and long hours to keep campus immaculate–have seen the “little details” that have kept campus running for more than a century. Indeed, these students are themselves the “underground workings” of the university.

Working together, student employees forge strong relationships with their supervisors and each other.

And this thanks to Higgs. As superintendent of buildings and grounds, he was among the first to tap student labor and recognize that student employment could benefit both the university and the worker. Because of his vision, he was called “one of the important factors in the cooperation between the school and students seeking employment” (Banyan, 1933, p. 11).

Higgs arrived at BYU in 1896. In 1908 he convinced President George H. Brimhall to adopt a new janitorial system that involved student workers. By 1921 he was named superintendent of buildings and grounds. Until he passed away in 1939, Higgs and 20 to 30 part-time student employees maintained everything at BYU, from lawns to attics to classroom floors.

Higgs believed that work experiences can contribute as much to education as do classroom experiences. He used his 5 a.m. pep talks to inspire his students to build better character as well as a better university. “Don’t be a scrub,” he would often say.

One of Higgs’ student workers was J. Smith Jacobs (’30, MA ’39). For those like Jacobs who attended BYU during the Depression, the typically meager opportunities for financial support were even more rare. But funds were not only scarce for students. BYU also felt the pinch of the Depression and agreed to participate in government work programs so the school could provide more jobs for students. 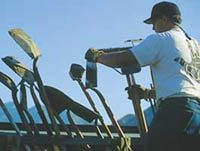 Jacobs, now 90 and retired in Orem, Utah, earned 25 or 30 cents an hour as an on-call employee for the Works Progress Administration. “We’d go and do whatever projects they had,” he says. “It might be on Maeser Hill raking leaves from under the trees or cleaning the ditch that’s up there. We just did any maintenance work they needed.”

Jacobs emphasizes that he was grateful for whatever work he could find. “We appreciated the work. Even though some of the kids were among the top student officers of the school, they still had to grab every little bit of work they could,” he recalls. “It was a real blessing to all of us that we had whatever jobs we got.”

But times weren’t always so lean for BYU or its student grounds crews. As the economy rebounded after World War II and the school gained more resources, BYU increasingly needed the willing hands of its student workers.

During the construction boom that epitomized the Wilkinson era, students were invaluable. According to a 1957 report of BYU‘s physical facilities, “The employment of students has permitted the department to carry on operation and maintenance of buildings and facilities, and to perform new construction work, at a greatly reduced cost” (“A History of BYU Campus and the Department of Physical Plant,” compiled in 1975, vol. 6, p. 94).

But just as Higgs preached at his Saturday morning rallies, campus jobs are as important for the individual as they are for the institution. Organizational behavior professor David A. Whetten commented in a 1997 devotional address about the impact of relationships built during campus jobs. “The story of Joe, a freshman from a broken home and impoverished circumstances, is illustrative,” said Whetten in May 1997. “After weeks of struggling with classes that assumed a level of understanding far surpassing his academic preparation, on top of working 20 hours a week and worrying about how to promote reconciliation among his disaffected and dispersed family members, his stressful circumstances finally overpowered his will to succeed. Late one night this frightened and distraught member of our community made a desperate call for help to the one person he felt would be willing to listen and to care–his custodial supervisor. Fortunately he received the reassurance and counsel he needed and expected and was able to complete the semester.”

“Working with each other that early in the morning, six days a week, looking pretty grubby (most of us showered after work), there was no facade,” Farnsworth says. “We knew each other for who we really were, not as the polished dressers and pretty faces that showed up in the classrooms later in the day. For several years I worked with a girl who would end up being a good friend, Becky Lowe. Becky helped me survive many hours of mundane desk scrubbing, chalkboard cleaning, and floor mopping.”

Since 1908 the task of keeping campus clean has fallen largely to student crews.

Today as many as one-third of the student body is employed on campus at a given time. Many current students work as Web masters, network administrators, and computer support personnel–jobs that did not exist 50, 20, or even 10 years ago. But the grassroots origins of the student worker are as apparent today as they were in 1908. After all, lawns still need to be mowed and floors still need to be swept.

Higgs’ corps of 20 or 30 part-time workers has become an army. BYU Grounds now employs more than 400 students during its peak fall season, and more than 750 students work as building custodians. With nearly 200 academic and administrative buildings and more than 600 acres, campus is a structure replete with details to be attended to. “We couldn’t do everything that we do without student help,” says Roy Peterman, director of grounds maintenance since 1976. “I don’t know how else to put it. It just couldn’t be done.”

Peterman takes his role in educating students as seriously as his predecessor did. “We are trying to create positive work ethics, positive feelings, and a sense of creativity and inspiration in our students.”

Such lessons have stuck with Danial J. Croft, ’72, who worked at the Central Heating Plant as a student. Cleaning tunnels and “pulling ashes”–disposing of spent coals from the furnace–provided Croft with exercise, work experience, and humorous moments. And, he recalls, “it was also at the Central Heating Plant where one of the old-timers gave this student a morale boost that I remember 30 years later. I had gone to work very early one morning to pull the ashes before class. The operator said a lot had piled up and he was glad someone had come to help. Then he paused for a moment and added, ‘I have a lot of confidence when you’re here, Dan.’ It was a nice way to start my day.”

A Brand to Rally Around

Gleeful in a Grim Business

A Series of Unfortunate Events has given a fortunate boost to the career of one BYU alum.

A grad student is living the dream—helping bears and humans peacefully coexist.