A Brand to Rally Around 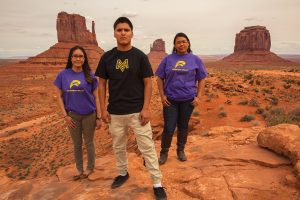 What does it mean to be Navajo? What does a Navajo dwelling look like?” Brian W. Turley (BFA ’14) stood in a classroom of Monument Valley High (MVH) art students, asking them to reflect on their heritage and doodle whatever came to mind. Outside the classroom the reddish, arid expanse of southeast Utah, marked with sky-high sandstone formations, whispered no answers.

Turley and a group of fellow BYU graphic design seniors were visiting MVH as part of a pro bono rebranding campaign for the struggling Navajo Nation school. The goal? Help boost students’ pride and investment in both their school and their heritage. But glancing down at students’ drawings, members of the BYU team saw teepees—Navajo people did not use teepees. In fact, many students’ doodles aligned with vague stereotypes of Native American culture.

From interactions with faculty and community members, the pro bono group sensed a collective desire for students to connect more with their Navajo culture. Adding to that are serious concerns about the approximately 230 students’ academic performance: recent testing found that only 3.2 percent were proficient in math and less than 2 percent were proficient in language arts.

“This last year was tough,” says MVH principal Spencer Singer. He says that one of the school’s main priorities “has been to improve our sense of culture and school climate. We want to get the kids thinking positively and trying to be successful.”

Enter the rebrand: MVH’s previous brand simply consisted of a cougar with a yellow and purple color theme. The BYU graphic design team kept the cougar mascot—naturally—but also created a secondary brand seal based on traditional Navajo baskets and a graphic pattern based on mountain motifs found in traditional Navajo rugs.

“We wanted to make something that would resonate culturally but also be fairly contemporary and cool,” says Turley, who spearheaded the project, continuing a 25-year tradition of pro bono ventures in BYU’s graphic design program. “We hoped we could make their mark something the students could own and get excited about, and then that excitement could transfer to other areas of their involvement in school.”

Singer says that while a visual rebranding effort in itself might not revolutionize school performance, it can certainly help.

And it helps BYU students too. Pro bono work gives them both experience working with a real client and the satisfaction of lifting a community. Calling the MVH rebrand a highlight of his time at BYU, Turley says, “It was incredible . . . to use the skills and crafts we’re learning to impact a community for good.”

Graphic design chair Eric A. Gillett (BFA ’91), faculty advisor for the project, says oftentimes designers get pegged for primarily serving big business. “Our program stresses that there’s nothing wrong with that,” he adds, “but there’s deeper meaning in what we do.”

A Brand of Distinction

A Crossroads of Cultures

Native Americans and a BYU-led team of archaeologists collaborated to uncover the history of Fish Lake.