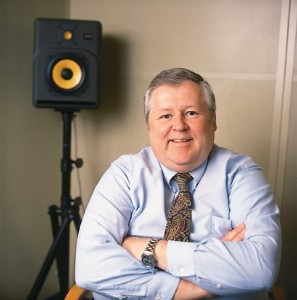 NO wonder she was startled. It was the first time the young Vietnamese woman had heard a noise in 13 years. She had been waiting for the doctors to fit her with hearing aids when her father whispered behind her. Surprised by the sound, the girl spun around to face him. Realizing that she had heard him, the father burst into tears. His daughter’s hearing had been damaged by a childhood illness, and the hearing loss was so severe that she was removed from school at age 12. Now, she could hear a whisper. The father turned to David L. McPherson, ’67, and thanked him. “Now my daughter has a future,” he said.“It was not an exaggeration,” says McPherson, a professor of audiology and speech-language pathology who has spent the past five years researching the incidence of hearing loss among children and infants in Vietnam. “Children with hearing loss may struggle with communication, poor academic performance, and poor social skills and have an increased risk for behavioral problems.” In Vietnam, he explains, these children are not encouraged to seek higher education and often end up making trinkets to sell to tourists. “These children, who really have normal intellect, are condemned to poverty for the rest of their lives.”McPherson’s desire to combat this trend has motivated his project to establish programs that identify and treat hearing impairments at an early age. “It is as much of a passion as it is a career,” McPherson explains.“To work with him is a constant inspiration, both professionally and morally,” says Quynh Kieu, head of Project Vietnam, the medical mission McPherson works under. “In everything he accomplishes, there is a deep sense of mission and a zest of enthusiasm.” Kieu invited McPherson to join the team after seeing his work on a similar program in Poland. “Vietnam has 3 million children with disabilities, and communication disorders are the second-highest diagnosis,” she says. “His internationally recognized experience in humanitarian aid has been invaluable in developing an audiology program in Vietnam.”To organize hearing-treatment programs, McPherson needed to know the extent of hearing loss in the population, which meant screening thousands of Vietnamese infants. To help with the legwork, McPherson recruited five BYU graduate students to accompany him last November on his seventh trip to Vietnam. 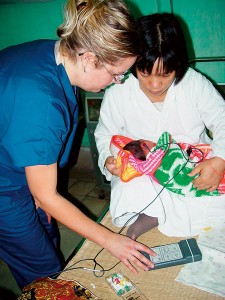 Graduate student April L. Benson, ’02, was on of hte students who helped McPherson study the incidence of hearing loss in Vietnam.

In addition to the logistical need for the students, McPherson says, “It is important for me to involve as many students as I can. It gives them the opportunity to transition from students to professionals because they are seen as professionals while they’re there.” Working in the crowded hospitals and birthing clinics, he asserts, “seems to instill within them a sense of confidence that I don’t think we are capable of providing in our clinical experiences in Provo.”Students who have accompanied McPherson are grateful to be mentored in a real-life situation by someone who is, as graduate student Mandi A. Kimball, ’99, puts it, “generous and passionate about his work.”“The students didn’t sightsee or take tours,” he says. “They worked very hard.” Every morning, the students traveled to hospitals in Hanoi. Entering the long, brightly painted rooms–which often had two mothers and two babies in each bed–the students would move from bed to bed, testing the babies’ hearing while the mothers held their new infants on their laps. “By screening infants, we are working at the earliest stage possible to catch hearing loss and use intervention methods,” affirms Nancy A. Blair, ’93, director of the BYU Audiology Clinic, who accompanied McPherson to Vietnam last fall and once the year before.The first screening test measures otoacoustic emissions (OAE) by putting a sound in the ear and then measuring the emission or “echo” the inner ear sent back. If the infant failed two OAE tests, the students used a high-tech automatic brainstem response unit to measure the brainwaves stimulated by a sound. Infants that failed both tests were referred to the hearing-aid-fitting program McPherson had established the year before. Blair notes, “It was much more fulfilling this year.” Before, they were unable to help individuals who tested positive for a hearing loss. “Now we can say, ‘Yes, you have a hearing loss, and here is where you can go and get hearing aids,'” Blair says. “Each trip builds on the previous one.”The next step for McPherson and his team is to help the Vietnamese establish their own infant screening program, beginning with a Vietnamese-run trial program this fall in Hanoi.Despite these encouraging advancements, McPherson acknowledges that they “still have a long way to go” and relates an incident that reveals the need for more education about hearing loss. A young boy came to the hospital to be fitted with hearing aids, and the Vietnamese audiologist working with him quickly became frustrated because the boy wasn’t following her directions. “I can’t test him. He’s stupid! I can’t do anything for this boy. He must be retarded,” the nurse said. “He’s not stupid,” Blair countered. “He’s deaf. He does not understand what you want him to do because he can’t hear you.”“The doctors and nurses work so hard with what we consider to be very limited resources,” Blair explains. “And yet they are so inventive with the things they do have to best serve their patients.” McPherson agrees, asserting that the Vietnamese audiologist’s misunderstanding was a result of inadequate training.Consequently, a major portion of McPherson’s time in Vietnam is spent lecturing at two hospitals–the National Institute of Pediatrics (NIP) and the National Institute of Otolaryngology (NIO). At the annual NIP meeting, McPherson taught the pediatricians how to identify hearing loss in infants, how to recognize and treat ear diseases, and how to use the otoscopes his team left with the institute to inspect patients’ ears.At the NIO, McPherson and Richard W. Harris, another BYU audiologist, demonstrated how to make ear molds for hearing aids. That way, once the doctors had used all the hearing aids the American team brought to them, they could make their own and establish a permanent program to supply hearing aids. “If you’re going to do something for an individual, then you have to provide a support mechanism so it is permanent,” McPherson says. “I can’t help someone hear for the first time and then leave them without any way to maintain their new ability to hear.”When completed, McPherson’s research won’t simply be filed away in an academic journal (although it will be published in both national and international journals). McPherson and international professionals will use his findings to improve treatment and intervention techniques in countries throughout the world such as Egypt, where he plans to conduct a similar project in coming years.McPherson struggles with emotion as he ponders the effects his team’s research and outreach can have. “There are enough of us that if we just look at things on a one-to-one basis and think, How can I improve this person’s life? I think we make a difference. We have an impact.”

Liza Richards, a former intern for BYU Magazine, is a freelance writer and editor living in Provo.

How can we come to know our Savior?

Three College of Nursing siblings team up to save lives around the world.

Going Forth: Love and Literacy, Music, and Sight for the Colorblind

Tiffany Ivins Spence sees dignity and divinity in people everywhere. Read how she and other alums go forth to serve.