Graduate student Jenny Ricks builds bridges of communication through involvement on campus and around the world. 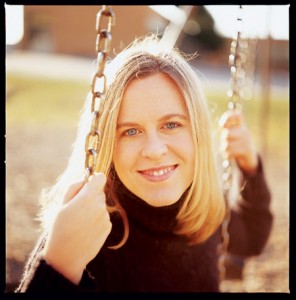 Vietnamese hospitals were a surprise for Jenny Ricks, ’03, the first time she traveled to Southeast Asia. The crowded, hot, one-story structures with fans whirring overhead weren’t much like the comfortable American hospitals she was used to. But she was unfazed. In education and in life, new and different is what Ricks does best.

Ricks, a graduate student in audiology and speech-language pathology, traveled to Vietnam twice in 2003, with other graduate students and BYU professors, to conduct hearing screenings on infants and young children.

On one occasion, she administered hearing tests in a preschool in Hoa Binh. These tests require quiet from both the person administering them and the person being tested, and no interpreter was available to explain this. Dripping with sweat in the crowded building without air conditioning, Ricks held children’s heads and tried to communicate this necessity to them through gestures. This challenging experience became her favorite moment of the trip.

“She’s not afraid to jump in and tackle difficult things,” says Barbara Culatta, professor of audiology and speech-language pathology.

As an undergraduate and now as a graduate student, Ricks has enthusiastically sought out new opportunities to serve and learn.

She jumped at the chance to volunteer for Friday Friends, a social skills group for children with high-functioning autism. In a research project for associate professor Christopher Dromey, ’85, she assisted in the computer-based analysis of severely disordered voices in patients with laryngeal cancer. She taught rhymes and alliteration under Culatta for Project CALL, which promotes literacy among low-income preschoolers. And, just for fun, she went scuba diving with BYU professors in Thailand.

Why does she involve herself in so many projects?

“Because I’m crazy,” she says, grinning. “I have no ability to say no.” But she adds, more seriously, “I always think, ‘this will be a good experience,’ and I just like learning.”

Now, as a first-year graduate student, she is exploring the emotional understanding of children with Specific Language Impairment with speech-language pathology professor Martin Fujiki, dean of graduate studies Bonnie Brinton, and other students. Their research will become the basis for her thesis.

Fujiki says the mentored relationships Ricks builds are the sort of thing he wants for all students, but not all students are willing to step out of their comfort zones enough to make them happen.

“Some people are a little more hesitant, a little more timid about trying something new, something outside of the standard classroom experience, but she’s just got no fear,” Dromey says.

Ricks involves herself in so many things because she loves what she’s doing.

“She’s not afraid to jump in and tackle difficult things.” –Barbara Culatta

For example, while working with Culatta in Head Start preschools, children greeted Ricks with “You’re the rhyme girl!” when she walked into classrooms. In that project, she drew children in by enacting stories and taught them pre-literacy principles through play.

“I love playing,” she says. “You find ways to put your goals into an activity, but basically you’re playing.”

But for Ricks, this is play with a purpose. Her most rewarding, enjoyable moments are when she can witness the success of a child she is working with. Her efforts have become cherished memories—a boy with autism making an emotional connection and a girl who normally remains withdrawn from the group energetically participating in an activity.

“When your client does something and you can really see it being meaningful, it’s a great feeling,” she says. “You feel like, ‘I’m making a difference—a tiny one, but still a difference.'”

Never Underestimate an Old Woman Who Graduated from BYU

Six former BYU roommates go on a reunion trip to celebrate their 80th birthdays and laugh about their favorite memories.