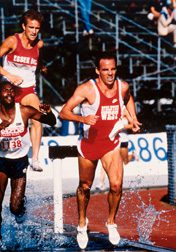 Repeatedly ranked as the world’s best runner in the 3000-meter steeplechase, Henry Marsh learned to appreciate competition or the chance to learn from the struggle.

A former Olympic athlete, Henry Marsh has always run against the same competitor—himself.HENRY D. Marsh, ’78, JD University of Oregon ’81 (Rozanne), Bountiful, Utah, is an Olympic athlete who made competition with himself the wellspring of success. Ranked as the world’s best runner in the 3000-meter steeplechase three different years, Marsh compiled more world ranking points than any athlete in U.S. track and field history.“My career is probably marked more by being prolific than by medals,” he says. Though favored for Olympic gold more than once, Marsh’s top finish was fourth at the Los Angeles games in 1984.“I never won an Olympic medal, but I was more consistent and around longer than anyone else,” he says.In 1988 he became the second American male runner to qualify for four Olympic teams. He won 10 national titles and broke four national records, setting the current steeplechase mark of 8:09:17. At the age of 31, he became the oldest man to run a four-minute mile. He did it again three years later.At BYU he was a five-time All American in cross country and track, but he also shined in the classroom, graduating cum laude in economics. He is a member of the BYU Sports Hall of Fame and a recent inductee into the U.S. Track and Field Hall of Fame.Marsh developed a love for track in the ninth grade. “I got into it mostly because it was just one of the sports you did, and then I found I had a talent for it.” His family was there to support him.“I give a lot of credit to great parents who created the right environment and opportunities,” he says. His grandfather, Henry D. Moyle, a former Apostle and member of the First Presidency of the Church of Jesus Christ, also contributed to that environment. He penned an inscription in a set of scriptures given to Marsh as a boy: “You can accomplish anything of a righteous nature if you have faith and desire and are willing to do the work.”But Marsh wasn’t struck with immediate greatness. Returning from a Church mission in 1975, Marsh was set to give up track but decided to put in four months of intense effort before moving on. That’s when his formula for success clicked.“I decided to focus on beating myself instead of competing with others,” he says. “I stepped onto the track out of shape and without direction and, seven months later, finished as the top American in my event at the Montreal Olympics.”Marsh says he came to appreciate competition not for the victory, but for the opportunity to learn from the struggle.After 12 years as one of the top-10 steeplechase runners in the world, Marsh hung up his spikes after the Seoul Olympics in 1988.He has since served as a consultant to the President’s Council on Physical Fitness and Sports and on the executive board of the U.S. Olympic Committee. He is a board member of the Salt Lake Organizing Committee for the 2002 Winter Olympic Games and president of the Utah Olympians Association.Though a lawyer by training, Marsh has built a successful career as a motivational speaker and a presenter for FranklinCovey. His clients include executives from IBM, General Motors, and Nike. He has also written a book, The Breakthrough Factor.web:henrymarsh.com

The Rex Lee Run was different—in the best of ways—this year for Sarah Kay Brimhall Miller.