Go Forth to Serve

By Elder Henry B. Eyring

The command “Enter to learn, go forth to serve” has been given to students at this university for generations, and the phrase has been repeated often in commencement programs because it catches the moment perfectly. We welcomed you, I hope warmly, when you came in the door to learn, and this is the day we show you the door, with a smile, on your way out to serve.

One reason for that smile is our confidence that you have gained the power to serve well. You might wonder about that. Why should we be confident that you will serve well, given the variety of experiences you have had and the rapidly changing world in which you will strive to give your service? The reason is twofold. First, there are some constants, across time and culture, in what it takes to serve. And, second, simply by being here you have had the chance to acquire what it takes. Your transcript may not show a course in service, but you took more than one.

To begin with, service takes persistence. Whatever cause you enlist in, however much it stirs your heart, hard times always come. People will disappoint you. Hard work will at some point bring little result. The cause may seem to falter. Others will quit. You may think, “The only reason I have to go on is that I gave my word I would see this through.” But for you that will be enough. With many of you, what I have said of the future was true in your past. You woke up one morning in Nagoya or Santiago or Amsterdam and it was cold and raining. Your missionary companion did not want to go out and neither did you. No one would have known if you didn’t go. But you went. You went because you had promised you would.

When you entered to learn at this university, you signed a promise to observe an honor code. You learned here that the honor is not in the code. It is in the choice to keep a promise. Perhaps you do not realize how rare an opportunity you have had in preparation for your persistence in service. When I was a boy growing up in New Jersey, my father was a chemistry professor at Princeton University. I remember one day at the train station a student telling me proudly of the statement he signed on the cover of every exam book he submitted. As I remember, he said the statement began, “On my honor as a gentleman, I have neither given nor accepted help on this examination.” Years later, when I arrived at Stanford University as a professor, I found an honor code there. It was gone 10 years later when I left.

I learned there that when students chose not to honor a code, no enforcement could restore it. You take with you as you leave a precious heritage of the choice to have integrity.

I hope we have often told you the story of Karl G. Maeser, who first led this school, saying that a line drawn on the ground around him would hold him as secure as would a prison if he had given his word of honor that he would not cross it. That legacy, if accepted, will make you persist when others fail, simply because you gave your word and kept it. Wherever you serve–in marriage, as a father or mother, in public office, or in leading a cause–the test of your integrity will come. And because of what you have learned, you will pass it. You may not write it on a piece of paper, but you will be able to say in your heart: “On my honor, I kept my word and I finished the course.”

You have also learned here what it takes to lead others in service. A cause of sufficient magnitude will require many hands to help. And you will rise to leadership because you have learned here how leadership is really conferred. People in authority will call you to a position. You may be given great powers to discipline and reward those you lead. But your power to lead them will at last be granted by their choice to follow you without compulsion. During your time here, you may never have registered for a course called Leadership. But you have taken more than one. You have heard the words spoken by the Master Teacher to His Apostles in their leadership course: “And he sat down, and called the twelve, and saith unto them, If any man desire to be first, the same shall be last of all, and servant of all” (Mark 9:35). 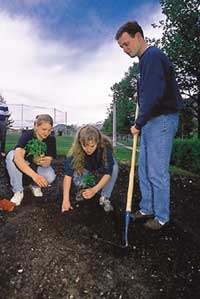 “You have had a course here, without a label, in choosing the service that matters most. Because you will serve and lead well, you will have more chances to give worthy service than you will have time or energy. You will have to choose which of the good causes are best.”

You have heard that truth taught. I hope you have also taken the laboratory that goes with the course. You have had the chance to try the experiment or at least to observe it. You may have tried leading by force, by coercion. It drew little from those you led. And you may have felt, as I have, the miracle of commitment from those who chose to follow you when they felt that you aimed to serve them more than you served yourself.

Again, I hope we’ve told you of that legacy of leadership here. I heard a part of it at the rededication of the Eyring Science Center. That building was planned by my great uncle Carl F. Eyring, the dean of science at BYU and a man famous for his work in the physics of sound. He was dying of cancer when the building was being finished. I learned at the rededication that during that time a student might have found him, late or early, working like a laborer on that building. That is your heritage of leadership here, multiplied a thousand times by teachers who learned with you and served with you. Because of what you heard and saw, you will lead others well in their service by serving them.

Finally, you have had a course here, without a label, in choosing the service that matters most. Because you will serve and lead well, you will have more chances to give worthy service than you will have time or energy. You will have to choose which of the good causes are best. And you must make those choices amid emotional appeals and much public clamor.

While you have been learning here, you have been shown a quiet place to go and a question to ask when those choices are before you. You will find the quiet place in prayer. And the question is, “What does God want?” Knowing what He wants takes knowing something about Him. You may not have thought of your religion classes as courses in how to choose the best place to serve, but they were. You have heard repeatedly that we are the spirit children of a Heavenly Father. He created the earth only secondarily for our enjoyment. Its purpose was to give us the chance to gain bodies and to freely choose eternal life or eternal misery.

Those few facts make some causes worth giving our lives for more than others. They will even help us define our objectives in causes, from preserving the environment to promoting democracy.

For instance, most environmental issues come down to whose interests are given precedence. To know that all we have and are comes as a gift from God, who ultimately owns all, leads to very different objectives in preserving what is called the environment. And the knowledge that God needs free choice for his children will change the way we use our resources or our power to encourage democracy or combat tyranny. God’s plan of salvation for His children can be a sure guide to choosing wise service across the range of opportunities that will present themselves to you. That plan, and knowledge of its Author, has been offered as part of your course in service at this university.

There is far more that you have learned here that will help you serve. But these three–the integrity necessary to persevere, the habit of being a servant leader, and the vision of which service God would value most–give us confidence that you will go forth and serve well. You will, at the end of your lives, look back with the same satisfaction King Benjamin felt. Keep his words with you as a promise for your future:

My prayer is that you will spend your lives giving such service, that you will give it well, and that you will have the satisfaction of feeling the appreciation of that Being whom you have really served.

Elder Henry B. Eyring is Church commissioner of education and a member of the Quorum of the Twelve Apostles. This article is adapted from an address given at BYU commencement exercises April 23, 1998.

When the 1958 Cougars qualified for the College World Series the team faced a decision that made headlines.

Sitting Down in the Honor Code Office

“One of the Great Lights of the World”

What we can gain from emulating Joseph Smith's love and lifetime of learning.