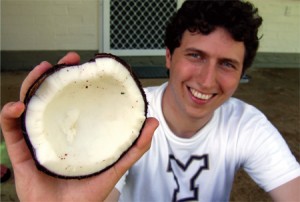 BYU chemical engineering major Jacob Jones led a team of students in Tonga, where they showed residents how to turn coconut oil into biodiesel fuel.

BYU student engineers are using coconuts to show that fuel can, in fact, grow on trees, and they recently traveled to Tonga to teach locals how to turn their fruit into fuel. Produced by modified chemical reactors, the coconut oil biodiesel fuel the students are making may have the potential to help the island nation’s economy and mitigate soaring fuel prices.

“The Tongan economy was centered around exporting coconuts and coconut oil until the 1980s, when soybean oil drove coconut producers out of business,” explains Allyson White Frankman (BS ’03), a chemical-engineering PhD candidate who played a major role in the project. “Farmers and processors were devastated, and the economy has never really recovered, but the coconuts are still there—they litter the ground.”

Wondering what could be done with all those coconuts, the Havea family, a Tongan family eager for assistance in the biodiesel process, approached BYU faculty members for help. The BYU faculty in turn formed a special class, Global Projects in Engineering and Technology, and left the solution up to students.“We were asked to solve a real-life problem,” says Jacob P. Jones (BS ’07), the undergraduate student team leader. “There’s no carefully formulated answer in the back of the textbook.”After a full semester of studying coconuts, from their chemical composition to their economic potential (and, on a study-break excursion, their viability as bowling balls), the student team and faculty instructors visited Tonga May 8–22.In Tonga diesel is a necessity, powering cars, pumping fresh water, and generating electricity for the enitre island—at up to $4.20 a gallon. Produced locally, the coconut biodiesel fuel could spawn a new form of employment in Tonga and create a viable export to countries placing emphasis on renewable energy.“The ministers were ecstatic and want to pursue the utilization of biodiesel,” says Randy S. Lewis (BS ’89), professor of chemical engineering and team advisor, along with professor W. Vincent Wilding (BS ’81).

“If it will be proven cheaper . . . the idea of biodiesel using coconut oil seems promising for Tonga,” said the spokesman for the Tongan minister of land, survey, and natural resources in a statement in Tonga Now.

For the BYU students, the experience revealed that their engineering skills can directly improve the quality of life for others. “The reward of seeing the project implemented and the impact it can have on a society halfway across the world is a life-altering experience,” Jones says.

From 1906 to 1972, BYU students annually climbed Y Mountain, hauling brushes and lime to whitewash the Y.