From Dead Last to National Champion

By Jeffrey L. Reynolds in the Fall 2003 Issue

For the third straight year, a BYU athlete has won the women’s 3,000-meter steeplechase title at the NCAA National Track and Field Championships and set the NCAA meet record in the process. Kassi Andersen, ’05, (left) turned in the third fastest time in U.S. history (9:44.95) and eclipsed the 2002 NCAA meet record by BYU’s Michaela Mannova, ’02, by a full second to win her first national championship in the event. 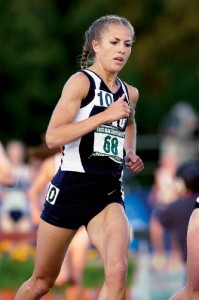 “It hasn’t really sunk in yet,” Andersen said. “I’m so excited, I still can’t believe it. It’s like a dream come true. Coming into the race, I just wanted to set a personal record and be in the top three. I definitely wanted to win, but I was going to be happy if I just did my best.”

Andersen was in 14th place—dead last—after the first 250 meters, but began to reel in each and every competitor. Sticking to her assigned pace (9:45.00), Andersen moved into eighth place with four laps to go, staying tucked in the pack to conserve energy for the finish.

With three laps remaining, the Provo native moved into second and followed Northern Arizona’s Ida Nilsson for the next 650 meters. Then, on the bell lap, the two pulled away from the rest of the field. As she had planned, Andersen went by Nilsson at the water jump and coasted down the home stretch to victory.

“I knew I had the race at the water jump,” Andersen said. “At the bell, she started to kick, and I just went with her. Prior to the race, Coach Shane told me to stay with the leader, and if I was close at the water jump, pass her and go. That’s exactly what I did.”

BYU students and faculty are making connections with people around the world.