From Courtroom to Classroom

What did a former Jordanian judge gain from courses in American law? 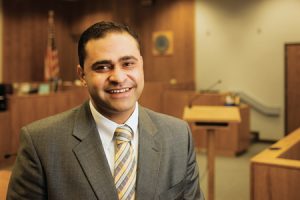 Asem Tarawneh (LLM ’08), called “Awesome” by other law students, completely fills his chair in the J. Reuben Clark Law School’s library. In fact, he looks a bit cramped. His football player’s physique is even more intimidating when you imagine him towering over a court bench as a judge.

Tarawneh came to BYU from the country of Jordan with seven years of law practice under his belt: four years as a judge in the capital, Amman, followed by three years as a prosecutor. Stature and experience considered, he no doubt is a formidable presence in any courtroom. But the mild-mannered and soft-spoken giant says he is not in law to draw attention to himself; he is in law to “do the right thing.”

And he isn’t the first former Jordanian judge to come to BYU.

Two of his colleagues, Mohammed al Nasser (LLM ’07) and Ali D. al-Museimi (LLM ’07), studied at BYU at the encouragement of Jordanian Supreme Court justice Abdul Karim M. Pharaon, who, through BYU ties and an anonymous donor, helped establish the Jordanian Judges Scholarship at BYU. Both al Nasser and al-Museimi used the scholarship to complete BYU’s LLM in comparative law for foreign lawyers, a one-year program that admits up to eight international students each year. These students interact with regular JD students in class and enhance their own law training by learning U.S. practices. The program allowed al Nasser and al-Museimi to study mediation and return to work in Jordan’s newly established department of mediation.

This law technique, legitimized in Jordan only in 2006, appealed to Tarawneh, who pursued mediation at BYU. “It’s a good way to solve cases,” he says. “In mediation, two parties come up with something the judge can’t decide. I think it’s more equitable than if the judge decided.”

Efficiency in law also appeals to Tarawneh. Amman’s 25 judges see roughly 25,000 cases a year. With so many cases, prosecutors must focus on only the cases for which they think they can get a conviction. For this reason, Tarawneh also studied plea-bargaining at BYU, a practice not yet employed in Jordan. “Plea-bargaining might be a good solution for these [harder] cases,” he says, “since the criminal would admit that he did something and would be punished.”

Tarawneh returned to Jordan this summer to resume work where the country’s judicial committee sees fit. If he continues in prosecution, he plans to recommend plea-bargaining. He may be reappointed as a judge and have a chance to apply his mediation knowledge. Either way, he’s armed with new ideas and an unforgettable experience. “I will miss BYU—the kindness of the people,” he says. “I have a lot of friends here. I have asked them to visit us in Jordan.”

So Many Titles, So Little Time

Want to brag about BYU? Read on.

BYU alum Hayley Smith overcame an eating disorder by immersing herself in Arabic and serving refugees.

Double your money? Polish your moves? Feel at peace? Check out 25 things you could learn at BYU in the summer.