While much has changed for BYU freshmen over 60 years,  some things are exactly the same.

By Peter B. Gardner (BA 98), Senior EditorWhile much has changed for BYU freshmen over 60 years,  some things are exactly the same.

In the last 60 years, hundreds of thousands of freshmen have begun their BYU experience in Provo. For the final installment of the First Year series, BYU Magazine asked four generations of them—former freshmen who started at BYU from approximately 1950 until 2010—to recall their first-year experiences. While much has changed, some things are exactly the same. 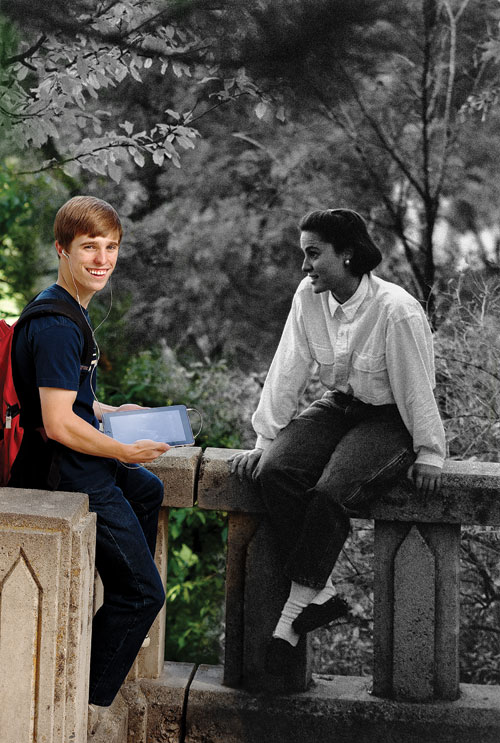 BoomTown: In the post–World War II era, BYU boomed in size—both in facilities and in student population.

Frugal Fun: Limited funds didn’t limit the fun for freshmen of 1950. With free Tuesday matinee dances, Wednesday mixers for a dime, social-unit dances, and many large dances for the whole student body, most remember fox-trotting, jitterbugging, and two-stepping to live Glenn Miller–styled bands. A night out often took students to a 25-cent movie, Rowley’s (a diner and hangout), or the original Cougareat in the Joseph Smith Memorial Building basement. Basketball games were free and a major draw, with the nationally ranked team playing before capacity crowds at the new Smith Fieldhouse.

Registering Concern: However well the year ended up, most freshmen of the early ’50s say it got off to a rough start with registration. “You had to go early in the morning; form long, long lines; and wait for a turn to talk to a counselor,” recalls Lillian DeAnn Rich Gardner (BA ’82). And that was just to create a plan. Then came the lines to pick up the various class cards. “On getting to the front of the line, you most likely learned that the class you wanted had been filled. . . . That often threw your whole schedule off,” she says of the experience, which could last all day. On the bright side, President Wilkinson was there to shake each student’s hand and, according to Douglas E. Nicholes (BS ’54), “many first dates . . . were arranged as you stood waiting in line.”

Home Away from Home: Living in BYU’s Weowna House, C. Jilean Harding Abegg (BS ’56) and her seven roommates got organized—“We decided to run our house as if we were a family,” she says. This meant morning “family” prayer, a job chart to keep things spiffy, and taking a turn every eighth week to provide meals for five days. Coming from a Payson, Utah, farm, Abegg would pick up food and meal ideas at home: “My roommates always loved it when it was my turn to provide and cook the food.”

Seasoned Freshman: For A. William Gallagher (BS ’54), the path from high school to BYU was anything but direct. Three days after graduating from high school in 1945, Gallagher enlisted in the U.S. Navy. Shortly after his release, he changed uniforms and served for three years in the Spanish American Mission. So when the GI Bill brought Gallagher to campus in 1951, he was far from being wet behind the ears. In a time when freshmen were occasionally required to don a beanie and tail and sing the school song on demand, his age and experience helped. “During my first Y Day, when some sophomore had the temerity to ask me if I were a freshman, I just looked at him threateningly and he quickly apologized—saying he had been, obviously, misinformed.” 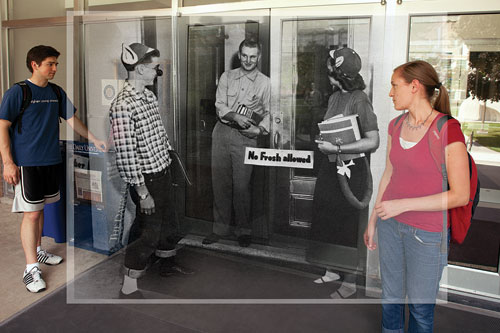 Options include Allen, Amanda Knight, and Knight-Mangum Halls; Wymount Village (repurposed barracks from Ogden); and various houses near campus. The first wave of Heritage Halls is finished in 1953.

About 20 percent of students participate in social units, such as ToKalon and the Brigadiers.

Students establish an honor code in 1949 to encourage academic honesty. 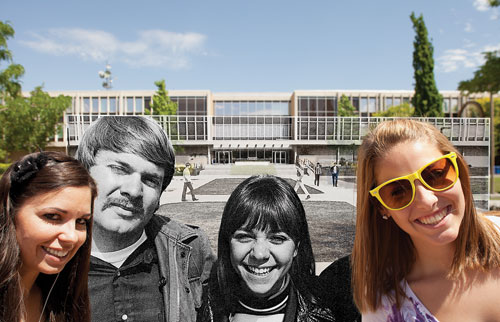 Constancy and Change: During years of social upheaval, BYU remained grounded on its founding principles.

Two for One: Carol A. Otto’s (AA ’74) first impression upon arrival at BYU was “Wow—[it’s] full of members of the Church,” which, at least in part, meant full of potential dates. Having had few LDS friends in high school, she hadn’t dated much and was now determined to make up for lost time. During her freshman year, she dated about once a week—a movie, games at the Wilk, sledding, a musical production. “One Saturday night, when my date and I didn’t click, . . . I was brought home early,” she recalls. Before long, other boys stopped by and she found herself invited to see the late movie. “I couldn’t believe I had two dates in one night.”

Serve and Be Served: In 1950 there were only two campus Church branches. By 1970, 10 BYU stakes, comprising nearly 100 wards, served students and, in turn, provided opportunities for students to serve. Deborah Dubois LeDuc (BS ’74) was called to be the Young Women’s MIA president, which at that time meant being in charge of social activities and which kept her more than busy. Other callings were more creative. Maribeth Powers Pettigrew (BA ’75) calls hers “a classic”—centerpiece coordinator for Relief Society lessons. “I’m afraid I can take no pride in how I fulfilled that calling,” she says. “A few muddled attempts made me quickly aware that I was not naturally gifted in that area.”

Fire and Ice Cream: Twins Jann and Jill Bassett (now Powell [BS ’75] and Franklin [BS ’75], respectively) quickly adopted BYU student traditions. A favorite was “candlelighting ceremonies,” when they’d gather in their Heritage Halls common area with the girls all sitting in a circle on the floor and the boys sitting around the perimeter of the room. With music playing in the background—often something soulful by the Carpenters—the girls would pass a lit candle. “When the candle came around to the ‘intended’ girl, she would blow [it] out, thus announcing that she was engaged,” says Franklin. Another tradition was to divulge a first kiss by treating your roommates to ice cream. “Then the barrage of questions would begin,” says Franklin. 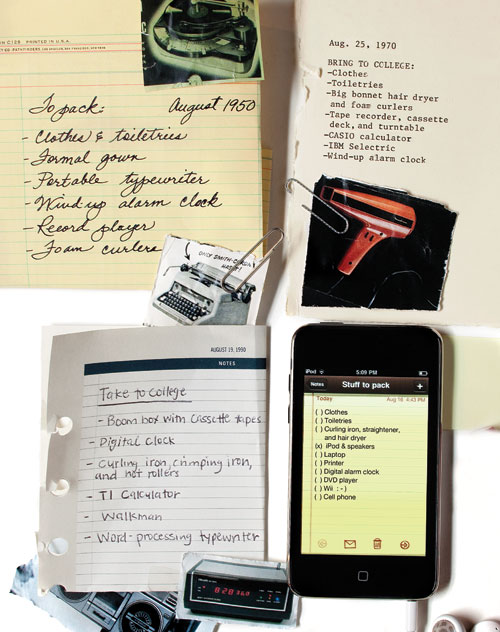 Until 1971 women were required to wear skirts or dresses; no jeans for men or women; in the ’70s men are asked not to wear beards or long hair. 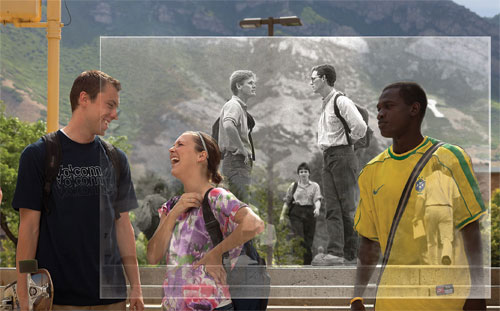 Vive la Résistance! Chele Draper Thaxton (BS ’95) was as interested in dating as the next freshman girl, and she did her fair share. Still, the 17-year-old student felt nowhere near ready to think about marriage. So it came as a shock when several of the girls in Budge Hall (the “Budge Babes”) began announcing engagements midyear. The unattached hall sisters banded together and, as defensive measures, cut each others’ hair short and wore T-shirts with the words “Many say eat, drink, and get married, but we will not Budge.” All but seven were “saved” from freshman engagement.

Sporting Chances: Kyle R. Christensen (BS ’95) was determined to get the most out of his freshman year—athletically at least. He and his buddies played every intramural sport available to them, but they didn’t stop there. Outdoor hoops on the Deseret Towers courts led to “legendary Nerf-hoop-anything-goes tournaments” (complete with Michael Jordan dunk imitations) and other improvised hall games. “One time, [my friend] Potter yelled, ‘Marathon!’ and started running the loop around our floor. So we all joined in and started running. Pretty soon, there were at least 40 guys running laps around our dorm floor in a W Hall 7th Floor Marathon. Who knows who won? It didn’t really matter.”

Cereal Time: Courtney King Walker (BA ’95) has lots of good memories from her freshman year in 1990—getting down to “Everybody Dance Now” at the dance clubs, cheering with 66,000 Cougar faithful as the football team toppled no. 1 Miami to start the season, dressing up as part of a live Clue game on campus. But many of her favorite memories center around food. “[I came] from a strict home where I had to ask any time I wanted to eat something—and usually that something was bland and healthy.” She came to love the offerings, healthy and otherwise, at the Cougareat, the Creamery, and especially the Morris Center cafeteria, where she ate most of her meals. “We could eat cereal all day long if we really wanted to, and when the served meal looked gross, it was cereal time.”

Lost in the Crowd: Having been top of his class in high school, Jerry K. Izu (BS ’95) was humbled when he got an 80 percent—with the curve—on an American Heritage exam. He pins some of the blame on the sheer size of the class: “I’d never had a class with 500 other students.” For Lisa Barber Furner (BS ’94), the American Heritage masses had pluses and minuses: while she expected never to be called on (sigh of relief), she also doubted she’d receive any one-on-one attention from the professor in this, her academic Achilles’ heel (sigh of despair). In order to get “respectable grades,” she says, “I took notes like crazy and recorded the lectures in case I missed anything.”

Registration by Touch-Tone phone since 1984; online registration doesn’t begin until 1999. 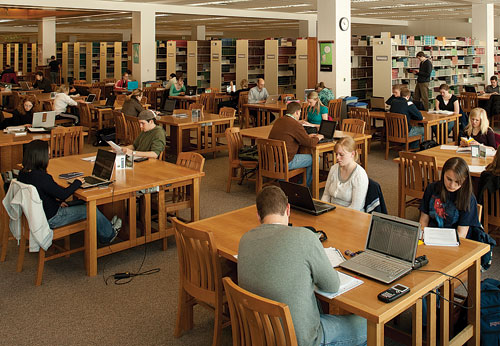 Wired & Wireless: From iPhones to laptops to online courses, technology permeates nearly every aspect of student life in 2010.

Online Matchmaking: When it came time to choose a roommate, Elisabeth Beckstead (’13) remembered the Christmas cards her family received each year from her mom’s former freshman roommate. “I felt like I was reading about my twin when I read about [their daughter] Emily,” she says. So she hopped online, looked Emily up on Facebook, and made the pitch. Emily agreed, and the two wound up in the same residence hall as their mothers. “We didn’t really know each other,” says Beckstead, “but I knew enough to know that we would become fast friends.”

Firm as the Mountains: Some new-student experiences in Provo haven’t changed much since 1950—or 1875, for that matter. Like generations of students before him, Spencer W. Smith (’15) was awestruck when he first took in the view eastward from campus. “I was amazed by how close the mountains were,” he says. “Every time I looked up while walking to class, I was in awe [of] the mountains and the millions of years it took for them to form so that I could now enjoy the awesome sight as I walked around campus.”

“Hi, Mom, It’s Me”: Until the mid-’90s, freshmen communication with home was usually limited to occasional letters or expensive—and therefore infrequent—long-distance phone calls. But technology has changed all that. Rachel E. Steele (’13), who struggled leaving home and starting from scratch socially, found comfort in her cell phone and the Internet: “I [called] my mom at least once a day, usually more. On Sundays I used Skype to do video chats with my whole family. It made leaving home a lot easier knowing I could see my family whenever I needed to.”

Life Direction: Freshmen face big decisions about their future, and General Education courses can help them get the lay of the land before singling out a path of study. Still, many say the classes dealing with their spiritual—not secular—development changed their life the most. “Being able to study the [Book of Mormon] had a big impact on me,” says Laurel M. Burrup (’13). “Hearing Brother [W. Jeffrey] Marsh’s (MEd ’84) testimony and his absolute love for us really touched me. . . . If I had specific questions about my calling as Relief Society president or my personal struggles with my dad’s cancer, he put in time to . . . give me the help I needed. . . . I felt like he cared about me personally.”

Wireless Internet available in most campus buildings; most courses have online components, some offered entirely online.

Sports Records: In 2010 BYU has its fourth consecutive football season with at least 10 wins;

The newest home-away-from-home for BYU students was designed to help students flourish.

When President Lee found it was taking students an average of 6 years to graduate, he knew changes needed to be made.

BYU is high quality at a low cost.