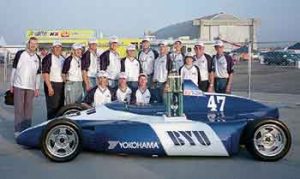 BYU’s “Electric Blue: racer and its student crew were the unexpected winners at the 1999 Tustin Thunder Race.

“We almost can’t believe it ourselves,” says Thomas L. Erekson, director of BYU’s School of Technology. “We didn’t think there was any chance at all of winning the whole thing.” The race wasBYU’s first, the student pit crew had no prior experience, and the college-aged driver, though a licensed professional, had never raced an electric car before.

The win was the more surprising because the team hadn’t expected to compete in the event’s main race, which was scheduled for Sunday. “We went down there thinking we’d get some experience in Saturday’s heat race,” says Erekson. “But then the race promoter told me that other teams didn’t mind changing the main race to Saturday night so we could participate.”

BYU’s car, named “Electric Blue,” is powered by 28 lead-acid batteries that can push the car to speeds of up to 120 miles per hour. During the 15-mile race, professional driver Spencer Trenery operated the car and logged the fastest lap on the 1.7-mile road course, clocking in at 1 minute 25 seconds. Throughout the race, the car averaged speeds of 76 miles per hour.

But it wasn’t the car alone that gave the Cougars their winning edge. Most university-owned electric racing cars are very similar, says Perry W. Carter, an assistant professor of manufacturing engineering technology and the racing team’s adviser. The deciding factor at Tustin was the unified choreography of BYU’s student pit crew, Carter says. “The battery exchange is what won the race.” The 10-member pit crew changed 1,200 pounds of batteries in just over 20 seconds.

The Tustin Thunder race is one of several annual collegiate races for electric cars. Such races usually occur in conjunction with traditional car races, but the race sponsors are careful to preserve the educational nature of the competition, Carter says. “To keep it on a low budget and to keep students involved, they require that the cars be owned by universities.”

To further ensure a focus on electric technologies, Carter says, all the car chassis are built by one company. “Outside they’re all identical–same bodies, same tires,” he says, adding that requiring professionally made chassis is also a safety measure, as race sponsors don’t want inexperienced students doing any welding. “But on the inside students can do their own thing. That way the competition is really in the electric part, not in the tires and suspension.”

Preparing the blue and white racer for the Tustin Thunder competition gave engineering and technology students hands-on experience, and next year that experience will be even more valuable. The race car, which the department only recently acquired, was merely tuned–not built–at BYU. But as part of a new course, Carter says, manufacturing engineering technology students will replace its running gear for future competitions.

His Grace Is Sufficient

Brad Wilcox’s sermon on grace may be the most popular devotional the magazine has published.

The Amazing Race for the BYU Case

A social media countdown to game day has fans hunting for swag-stuffed boxes across the nation.

Help Someone Sit in the Sun