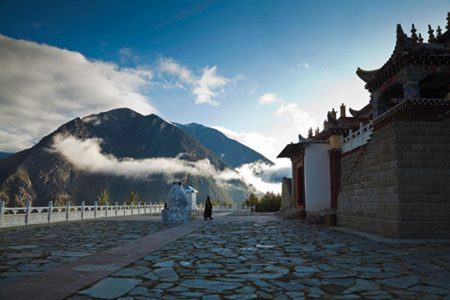 A traditional Chinese landscape painting often depicts villagers engaged in tasks near a placid river, ancient gnarled trees clinging to a cliff, or the distinctive curved roofline of a wooden pagoda emerging from the valley mists.

BYU photography students and their mentors explore contrasting faces of the world’s most populous country.

Jessica Kehl used a panning technique, moving the camera at a perfect speed to photograph a sharp subject and a blurred background, to capture this image of a woman whizzing by on the busy streets of westernized Chengdu. Kehl says this technique, taught to her by a fellow student, requires patiences, skill, and luck. Photo by Jessica Kehl. 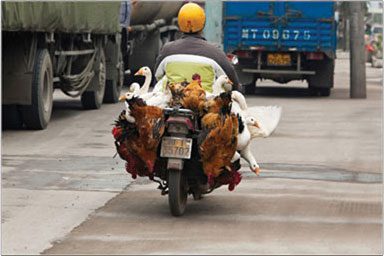 Stuck in Sichuan traffic, the photographers made the best of the situation by getting out and finding interesting things to shoot. “I saw this guy coming with lots of poultry at the back so I prepared to shoot after he passed by me,” says John Wang. “People there use motorcycles for everything,…carrying passengers, cargo [and] animals.” Photo by John Wang. 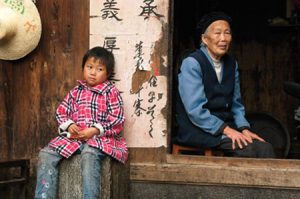 In order to support their family, many Chinese parents travel to jobs in the cities, leaving their children in the care of grandparents. John Telford observed that “Children in the more remote villages were, for the most part, seen in Western-style clothes;…the older person was typically dressed in traditional Chinese clothing.” Photo by John Telford.

Photography professor John W. Telford’s (’71) hope in leading a trip to the Orient last May was to find these kinds of scenes, vistas that really said, “This is in China,” and to explore their photographic potential with a handful of his undergraduate students. 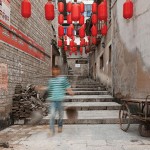 Every 30 seconds a new worker would descend this stone staircase, giving Reed Rowe numerous subjects to photograph. “It gave me the opportunity to select from a wide variety of clothing color to get something that accented the shot just the way I wanted it,” he says. Photo by Reed Rowe.

“It was a great opportunity to see an authentic China as opposed to just going to tourist places and seeing things that most Westerners get to see,” says Telford of the four-week trek that started in the eastern port city of Shanghai and wound west. In a quest to become better
photographers, the students—beneficiaries of a BYU mentoring education grant, which covered a major part of their travel expenses—filled their memories and memory cards with distinctive images of the people, the culture, and the land. A select group of their 25,000 images would ultimately be displayed in a Harris Fine Arts Center exhibit. 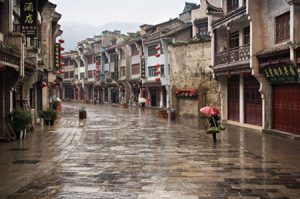 After Lucy Call took this photo of a lady carrying vegetables and an umbrella in the ancient city of Zhenyuan, Guizhou Province, she didn’t think much of it. “It was a friend who saw it and loved it and convinced me to use it in the show,” she says. Photo by Lucy Call.

“We were telling the story of modern-day China through the lens of a camera,” says Jessica Bingham Kehl (’08), a visual arts student who has studied Chinese history. “I love the challenge of capturing the essence of a place, person, or event.”

For student Shad V. Hopkins (’10), who had never traveled overseas, seeing far-flung China through his camera lens was a singular opportunity. “I wanted to see what the world had to offer—vibrant-colored rice fields, bright colors on village flags—and to take pictures and capture emotions in the people we met and saw. I was able to accomplish more than I hoped.” 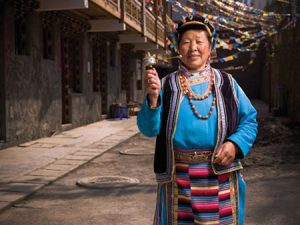 As they traveled, the BYU group photographed colorfully dressed ethnic minorities, including the Miao, Shuang, Dong, and Yao people. Shad Hopkins was inspired by the people living in the small villages they visited. “I felt so lucky to see how they live and meet them. I thought that they had so little and lived such a hard life. But these people were happy.” Photo by Shad Hopkins.

As this artistic and educational journey progressed, each student developed an individualized approach. While
shooting in the same location caused some duplication, Lucy L. Call (’10) tended toward images of people at work and school, Hopkins explored repeating patterns in nature, and Reed S. Rowe (BFA ’09) shot photos of bridges.

For Kehl, who created a montage of Chinese doorways, the journey was about color and contrast. “After our initiation to the country,” she says, “we were continually reminded that China is a land of veneers. One minute I marveled over a massive concrete dam built with the latest 21st-century amenities and the next I encountered an indigenous people in tribal garb.” 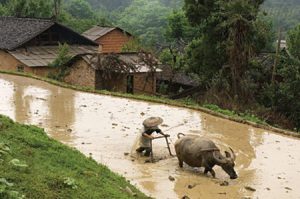 Farmers in the Guizhou Province prepare rice paddies for planting each year using water buffalo and hand-made wooden plows in the same way as they have for generations. Photo by John Telford.

To further explore contrasts in this country under construction, Telford and Wang arranged for the group to travel to some of the most remote parts of China. After capturing city skylines in Shanghai and Chengdu, the group journeyed west toward Tibet, then circled back, visiting national parks, remote ethnic villages, and newly built dams and roadways.

Traveling together provided opportunities for the students and mentors to observe each other and to collaborate. One day when the group was stuck in traffic, they jumped out of the car to get some pictures of a nearby village. “I
noticed that Reed [Rowe] was getting some really high-energy pictures of the motorcycles passing through the traffic by using a technique called panning,” recalls Kehl. “I asked Reed to teach me how he was getting such great images. . . . After that I was able to capture some of my favorite images of the trip using what he had taught me. Those kinds of learning experiences happened continually throughout the trip for me. I grew as a photographer in a way that I couldn’t have in a classroom.” 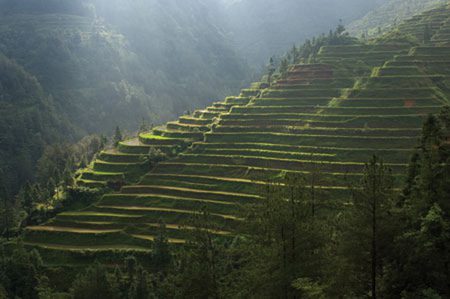 Many of the beautifully sculpted terraces seen on mountainsides such as thes in the Guizhou Province were created during the Ming Dynasty – some 500 years ago. Photo by John Telford.

Rowe says he progressed similarly in his abilities. “Landscape photography is not a specialty at all of mine, so to be able to stand side by side with John Telford and glean some of that knowledge in such an amazing landscape is priceless,” he says.

To see more “authentic stuff,” as Wang calls it, the group traveled to the village of Dimen, home to the Dong people, one of China’s 55 ethnic minorities. “The driver had a hard time finding it. It is remote and is not a tourist spot,” says Wang, who is originally from Shanghai. “I had never been to this kind of minority village before, so it really surprised me. It is like time stopped and everything is a thousand years ago—the way they work, the way they farm, their daily dress.” 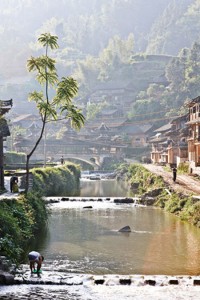 For more than a weeks, the BYU students and mentors immersed themselves in the Dong culture of Dimen, a remote ethnic village in southern China. Jessica Kehl says, “It was impossible to soak in deeply rooted culture and ancient traditions that are still in practice today.” Photo by Jessica Kehl.

The group spent more than a week in the area and was able to experience the people, culture, and landscape. Wang explains, “This village is in a little valley in the gorge, so the mountains surround it.We could climb the mountain and see the sunset, where the sun hits those ancient architectural buildings. It blew me away; it was just so beautiful.”

At the entrance to Dimen, Kehl turned her camera on end and fixed her lens on a tranquil village scene, a quintessential view of China, the kind that her professor had hoped they would find. Near a sunlit river a man gathers water, another bends to secure the top of a sack, a woman walks along a flagstone path, a child on her back. Power lines crossing above the river reveal that the progress hurtling across China is arriving; satellite television is appearing in rural locales before running water is piped indoors. In the background is a covered “flower” bridge, an iconic example of ancient Chinese construction. Mist partially obscures the trees and dwellings on the steep hill beyond.

After the mentors and students take their photos, they walk into the scene they just captured. No one remains to document the bright sunlight dancing on the water, illuminating the band of photographers walking and talking. They stop on the bridge, look back to where they came from, cross the river, and enter the village.

Watch a slideshow of more images from the photographers’ trip at magazine.byu.edu/china.

Hedengren wasn't a missionary but he chose to focus on missionary work.

The greatest work for this portrait photographer is recording the lives of refugees.