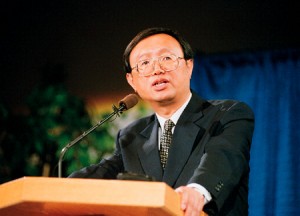 In his recent visit Ambassador Yang Jiechi addressed a BYU audience and donated 1,000 Chinese texts to the Harold B. Lee Library.

ON Sept. 12, 2001, Yang Jiechi, ambassador to the United States from the People’s Republic of China spoke to hundreds of students and faculty in the JSB auditorium as part of the David M. Kennedy International Lecture Series. In his first lecture at an American university since his appointment to the ambassadorship in February, Yang presented the Asian Collection of the Harold B. Lee Library with 1,000 Chinese texts, including reference materials like dictionaries and grammar books. The donation was the largest of several China has made to various universities around the country.In his remarks Ambassador Yang praised both Brigham Young University and the state of Utah. “On behalf of the Chinese government, I would like to thank President Bateman and the university for taking such a positive attitude towards scholarly and other exchanges with China,” Yang said. “We have benefited a lot from it.”After discussing Sino-American relations past, present, and future, Ambassador Yang added, “I realize even more deeply how much Utah has contributed to the relationship between China and the United States.” He compared China and Utah’s similar economic pasts, strong family values, and emphasis on education. In closing Yang noted that China, the host of the 2008 Summer Olympic Games in Beijing, would look to learn from the 2002 Winter Games in Salt Lake City. “We wish you great success. The Olympic rings already have become links between our two nations,” he said.BYU, which has more than 200 enrolled students from the People’s Republic of China, has fostered close ties with the nation through repeated visits from BYU performing groups, students, administrators, and faculty members.

A BYU study shows that heroes and villains on packaging affects the types of food you buy.

Giving kids an incentive for any number of good things can help establish healthy lifelong habits.