As plans were formulated for BYU’s first alumni house in the late 1950s, Raymond E. Beckham (BS ’49), then the Alumni Association executive secretary (director), begged to have the structure built at the campus entrance. But most administrators favored a site more removed from the main thoroughfare bringing traffic into BYU.

“Nobody wanted this lot except me— and I really wanted it,” says Beckham.“Others thought the site I favored didn’t have enough land and believed it would not work well with the adjacent campus road,” explains Beckham.

But Beckham’s voice triumphed and the Alumni House, which is being razed to make way for the Gordon B. Hinckley Alumni and Visitors Center, served the university and its alumni at BYU’s western entrance for more than 44 years.

Carr C.Krueger (BS ’85), immediate past president of the Alumni Association, is glad Beckham’s location prevailed. “The Alumni House held this site for our alumni and friends,” he explains.“When it came time to plan for a new facility, we were thrilled to have this location as a prominent gateway to campus.” 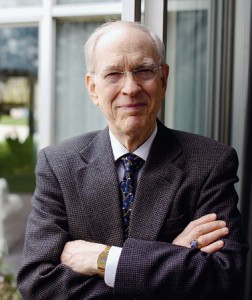 An Alumni Association pioneer, Ray Beckham spearheaded the construction of the Alumni House and laid foundations for many of the association’s current programs, activities, and services. Photo by Bradley Slade.

Of his work and successes in the Alumni Association, Beckham says, “I credit Ernest Wilkinson for his clear vision. He had strong ideas about alumni participation, and when he hired me as executive secretary, he wanted me to do it full-time.” Prior to Beckham, the alumni secretary was part of a broader job that included various other campus assignments. In fact, the alumni secretary—and any alumni work—had floated throughout campus, housed by no building in particular.With Beckham in place, Wilkinson arranged for a temporary alumni building behind the Eyring Science Center. The makeshift residence accommodated Alumni Association work but lacked space for alumni visits.

“The president and I pushed for an alumni home, and Wilkinson proposed it to the board of trustees,” Beckham explains. The Church agreed to fund the building with the stipulation that it also be used for student church services. After the building was dedicated in 1962, the large conference room served as a chapel and other open spaces as classrooms.

“When it came time… for a new facility, we were thrilled to have [the Alumni House site] as a prominent gateway to campus.” –Carr Krueger

Once the Alumni House was secured, finding BYU’s alumni and raising money for the school became top priorities for Beckham. BYU had an alumni base of more than 55,000 but almost no records. Recalling the daunting task, Beckham says, “We went through the Provo phone directory to find familiar names.”

Beckham even got permission to hire employees from the Presiding Bishop’s office to spend evenings and weekends examining Church records to find alumni. His team tracked alumni down to wards or stakes, finally finding them through Church leaders and ward members. BYU publications pled, “Please contact us if you know any of these names,” and class presidents helped locate missing alumni.

Beckham will never forget his encounter with a class president of 1912. The man’s affiliation with BYU had ended with his graduation, and no one knew where he was.

“He called one day to say he had heard we were looking for him, so I paid him a visit in Salt Lake City,” Beckham recalls. The elderly man lived in a small, run-down trailer. Beckham felt sorry for him, but they had a pleasant talk. “When we ended the conversation, he said he wanted to give something to BYU. I drove him to a local bank, and he emerged with a pouch.”Upon opening the pouch, Beckham found stocks and other financial papers worth nearly a quarter of a million dollars.

During the construction of the Gordon B. Hinckley Alumni and Visitors Center, Alumni Relations and the BYU Annual Fund division of LDS Philanthropies will be housed in the Knight Mangum Building at the southeast corner of campus. Named after a daughter and daughter-in-law of early BYU benefactor Jesse Knight, the Knight Mangum Building has filled many roles through the decades, including those of student residence hall and missionary training center. Alumni Relations has been relocated to the west end of the building on the second and third floors.

An alumna teaches high school at Rikers Island, one of the largest jail complexes in the world, with compassion.

For 20 years, Carl Bloch's Christ Healing the Sick at the Pool of Bethesda has stood as the MOA's centerpiece.

Professors and students at BYU are working to help kids with autism learn social skills . . . through a fish.