How incentives can help children learn to do the right thing.

GOT BROCCOLI? If your elementary school–aged kids are like their peers, they might have it on their dinner plates but aren’t necessarily eating it. At school, chances are even lower they have it on their lunch trays let alone take a bite. Unfortunately, as they turn up their noses at healthy foods, they’re likely gaining weight.

So what’s a parent to do? Joseph P. Price (BA ’03), assistant professor of economics, has a novel idea—pay kids to eat their fruits and veggies. A study he recently completed shows that giving kids an incentive for any number of good things can help establish lifelong habits such as healthy eating, regular exercise, and good hygiene.

The idea of “bribing” children is appalling to some, but Price says that dispensed sparingly and carefully, incentives (money or other tempting rewards) are a tactic worth adding to your parenting toolbox. “Paying kids can jump-start habits for good behavior,” says Price, a father of five young children. “Ideally we want intrinsic motivation, but if a kid is not eating any veggies at all, then this is an option.”

To find out, their research team ran an experiment at 15 elementary schools in Utah County. First they observed students’ eating habits and found that 62 percent took at least one serving of veggies, but nearly half of the veggies (especially broccoli, cauliflower, and peas) ended up in the trash. Next they had the schools announce that students could receive a reward if they ate their veggies. For five days, three schools offered 25 cents immediately upon finishing lunch, two offered an immediate 5 cent prize, three offered money at the end of the month, three offered an immediate prize, and three offered a prize at the end of the month.

The results were dramatic. In the schools offering 25 cents immediately, veggie consumption increased from 34 percent to more than 70 percent. The prizes were also motivating, though less so. Immediate money was more motivating than delayed money.

When Are Incentives Helpful? 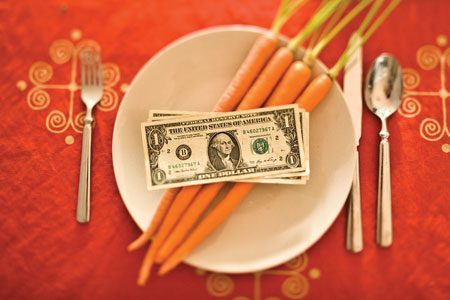 Price argues that incentives are an effective tool when other strategies aren’t working. If a child doggedly resists brushing his teeth or refuses her veggies even when threatened with no dessert, an incentive could be helpful—whether it’s money or something else the child values. “I hear parents say, ‘My kids just won’t eat their vegetables,’ but I would argue that they’re just not providing the right incentive,” says Price.

Incentives can be especially useful in getting a child to give a new behavior a true tryout instead of a half-hearted effort. Price recently used a money incentive with his 7-year-old son, who decided he didn’t like baseball and wanted to quit his team. Price figured his boy just didn’t have enough skill yet to enjoy the sport. So he offered him $1 if he hit 100 balls. “He wanted the dollar, and in the process of hitting those 100 balls, he got so much better that he liked it. I never had to pay him again.”

Price believes parents can use a similar approach with any behavior they want to encourage. A daughter who refuses to read, for example, might learn to like reading if she had the right incentive to try it long enough to experience the delights of The Wind in the Willows or Harry Potter.

An important question is whether the effects are lasting. As a scientist, Price doesn’t know yet, but as a father he says yes, they are. “We don’t want to pay kids forever to eat their veggies. The idea is to get them to acquire a taste for it and change their behavior long-term.”