Little did Scott C. Porter (BA ’97, MBA ’04) know when he spent a long weekend visiting friends that one of the games they played would become a successful prizewinner for him and his brother Bryce V. Porter (BA ’05). 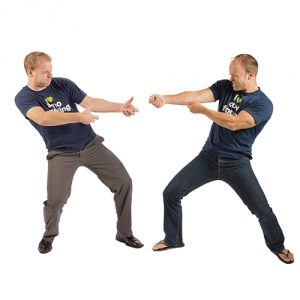 Can you guess what Bryce and Scott Porter are acting out from their award-winning game, Reverse Charades? (Answer below.)

“It was so fun because everyone was actively involved in the game, instead of having one often-ill-at-ease person giving non-verbal clues to everyone else,” Scott says. “We all looked silly. I told my brother we should turn it into a real game with cardboard cards, a score pad, and a timer.”

That was the beginning of Reverse Charades, a game that has been featured on NBC’s Today Show and Radio Disney and has won more than a dozen awards, including the Oppenheim Toy Portfolio Platinum Award, the National Parenting Publications Gold Award, and Creative Child Magazine’s Game of the Year.

A junior edition of the game was released in 2011 and has already won several awards. Additionally, the brothers have created the game in French, Swedish, and Dutch and have expansion word packs themed for girls’ night, sports, and holidays. A mobile app version of the game has yielded more than 100,000 downloads.

Not surprisingly, their biggest challenge came when they began to market Reverse Charades. “Stores want to know about your sales record before they are willing to place the game, but you have to be able to get into stores to make sales,” Bryce explains. The duo attended trade shows, made cold calls to businesses, and worked through mommy bloggers, who would mention the game in their posts. Gradually they got enough sales to get attention from stores.

“Our first placement was the BYU Bookstore,” Bryce says. When yearly sales reached 2,500, marketing became easier. Businesses and individuals began calling the brothers, and sales expanded to 20,000. Three years after breaking into the first store, Reverse Charades has been placed in more than 1,800 retail and online stores, including Barnes & Noble, Hallmark, and 50 college bookstores.

“We like the game because people find it so fun,” Scott says, “but we are also finding businesses who want to use it in team building and leadership, and it has had use in educational and language-learning settings.”

Giving Back is a Class Act

The classes of 1949 and 1964 demonstrated their gratitude to their alma mater with generous class gifts.