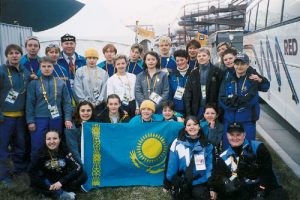 WITH a small act of kindness, Shannon M. Arnoldsen, ’93, a volunteer assigned to the Peaks Ice Arena, set off a chain reaction of Olympic service. Arnoldsen learned that Kazakhstan’s women’s hockey team was not sponsored and had little money for souvenirs, so she went to work to find out what she could do to enhance their Olympic experience.“I wanted to make sure they had a fun time here in Utah,” Arnoldsen says. “I wanted to give them something.” She called several retailers asking for discounts or donations but had no luck. She then called the BYU Bookstore. “It was so different from the other stores I had called that day,” relates Arnoldsen. “BYU was excited to help.”Gordon M. Brown, ’80, specialty general merchandise manager at the BYU Bookstore, says, “When Shannon talked to me, it was just a given—of course we’d like to help.” The Bookstore donated 25 hooded BYU sweatshirts.Arnoldsen’s neighborhood banded together. They wrote letters and made cards for the athletes and donated enough money to give each team member $20.While Kazakhstan played against Sweden, their team driver let Arnoldsen on their bus. “We laid out a sweatshirt, a golf shirt, some publications about Utah, and a pin on each aisle seat,” explains Arnoldsen. She handed the women their cards and letters as they boarded the bus after losing their hockey game.“The team was so excited and gracious,” Arnoldsen says. “It was incredibly fulfilling to watch them. Because of the help and generosity of so many people, we were able to send this team home feeling great about their experiences here.”

BYU women’s basketball team are proving themselves making it to the NCAA Sweet 16 for the 2nd time in program history.