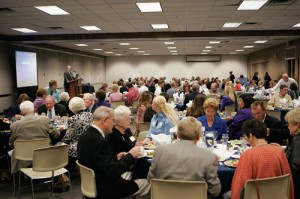 The first reunion for the new Student Officers Society attracted nearly 200 people. The society will support BYU and serve students.

When a group of former student body presidents created a new Alumni Association affinity group, they hoped to establish an organization that would bring people together and serve the university. When the fledgling Student Officers Society conducted its first reunion during Homecoming 2005, the 170 attendees from across the country turned the gathering into the largest reunion at homecoming.The society, for alumni who served in either BYUSA or ASBYU, was founded in May 2005 and plans to sponsor an annual homecoming reunion as well as a springtime gathering near the time of the Church’s general conference.“Harry S. Truman once said that progress occurs when courageous, skillful leaders seize the opportunity to change things for the better,” explains Bruce L. Olsen (BS ’63), one of the former student body presidents who helped establish the group. “We invite the many student leaders of the past to help us to support BYU. We have been exploring ways to provide mentoring and encouragement to students through career fairs, placement, and networking. We are looking to be friends to all current students, not only student leaders.”At the gathering Elders Neil L. Andersen (BA ’75) and D. Todd Christofferson (BA ’69), former student leaders who are now in the Presidency of the Seventy for the Church of Jesus Christ, challenged attendees to use their leadership talents to build the kingdom of God.Participants included former elected student officers from each decade since the 1940s as well as the current BYUSA student officers. For Diane Van Orden Moon (BS ’75), the reunion helped her feel connected to others who had offered similar service: “I came only knowing a couple of people, but everyone I met was so warm; I was so glad I got to meet them.”Another former student body president, Reid A. Robison (BA ’75) says he helped develop the new organization based on his positive experiences as a BYU student leader. “How wonderful it is that future student leaders will have the opportunity to make the transition into an organization that continues to foster close ties with BYU,” he says.Cynthia Watte Connell (BA ’95) is helping refine the group’s mission statement, a charge she takes seriously. “With this organization we have a great opportunity to use the dynamic of spiritual commitment and understanding of leadership to effect change. BYU did a lot for me, and helping BYU is something I believe I am meant to do.”Robison, who directs the alumni activities division of BYU Alumni Relations, says the Student Officers Society is part of the Alumni Association’s new movement to create affinity groups, organizations that bring alumni together by shared interests rather than by class year.“In the mid-’60s the university made a transition from being a smaller school to one where class size was more impersonal,” he says. “It has become increasingly more difficult to identify with people who graduated the same year. Our reunions for classes prior to the mid-’60s are composed of people who were close friends during school and who knew most of their classmates.”For people who graduated after BYU became so large, Robison says the way to find the same camaraderie is through affinity groups. “It’s an exciting way to connect people who have like interests and who shared common experiences while at BYU.”INFO: reid_robison@byu.edu

When life handed her failing kidneys, Diana McGuire gathered her courage and changed her fate.