In early 2004, filmmaker Matthew M. Whitaker (BA ’92), still weary from a marathon, transcontinental flight, rode to a way-out-of-the-way village on his first night in India. He was spearheading a documentary about microcredit and the millions it touches, and he was eager to put some faces to all the stories he’d heard. 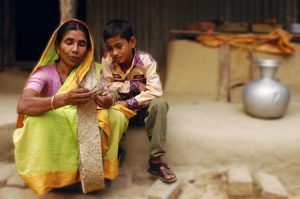 This Bangladeshi woman used her first microcredit loan to start a rice-husking business and take a step out of poverty. Photo by Brian Wilcox.

“This village felt like the most remote place I’d ever been in my life,” says Whitaker, who wrote and directed BYU’s recent documentary Small Fortunes: Microcredit and the Future of Poverty. “We got to this little hut made out of mud and wood, and there was a group of women sitting in a circle.”

The women were there for a training session, Whitaker explains, getting prepped on the loans they were about to take out for the first time and practicing their all-important signatures. “They were all illiterate women,” Whitaker says. “And as we walked into this woman’s home where the [session] was being held, we could see on the dirt floor where she had been scraping her name, practicing so she’d be ready to take out a loan.”

“I think the objective in making the film was really about trying to soften people’s hearts.” –Sterling Van Wagenen

Those Indian women, and millions like them all over the world, are part of the ever-swelling ranks of microcredit borrowers. Unable to muster the collateral for traditional loans, they borrow from special microcredit banks that are willing to stake them on little more than their word. These “micro” loans are sometimes as small as $10 or $20, just enough to get an aspiring entrepreneur off the ground. “Microentrepreneurs,” as they’re called, aren’t on the dole. They build up their businesses with loan money that they eventually repay, with interest, as profits start to accumulate.

Since its first incarnations in the 1970s, microcredit has benefited well over 100 million people, with payment rates on loans averaging better than 95 percent. Its proponents will tell you how microcredit could wipe out poverty as we know it, how it could reconfigure the world. Which is why, in a nutshell, BYU got involved.

In November 2004, Whitaker and his team screened a segment of Small Fortunes for the United Nations, which declared 2005 the Year of Microcredit. A few months later, Sterling G. Van Wagenen (BA ’72), the film’s producer, successfully pitched it to PBS, which premiered Small Fortunes in October 2005 and will air it again in June 2006. 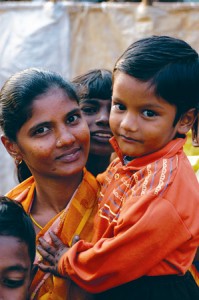 Vadla Bhagyamma, who lives in rural India, bought a water buffalo with her first loan, began selling the milk, and put her son in school. Photo by Justin Andrews.

The film seeks to debunk the myth that the poor are lazy and therefore deserving of their poverty. “These people work incredibly hard,” says Mike Murray, who heads up a microcredit organization called Unitus. “I realized [their poverty] wasn’t due to a lack of effort . . . it was due to a lack of opportunity.”

With that premise at the forefront, the documentary takes viewers to Bangladesh, India, Africa, and even New York City, telling the remarkable stories of people who have been enabled by microcredit.

They are stories of industry at its most pure: the woman who buys a water buffalo with her loan, sells the milk, and puts her kids through school; the lame man who plans to use his loan to get his cobbler business up and running; the woman who turns discarded cement bags into marketable shopping bags; and on and on.

“I think the objective in making the film was really about trying to soften people’s hearts,” says Van Wagenen, “and to help us find very pragmatic ways to help other people lift themselves out of poverty.”Read more at kbyutv.org/smallfortunes/

All the Intramural T-Shirts

Ultimately, it’s just cloth. But to those who played in the intramural program, the cotton trophy is so much more.