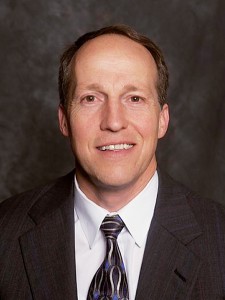 ALTHOUGH the new president of the Alumni Association grew up in El Paso, Texas, many of his fondest childhood memories involve BYU. As the sixth of seven children—all of whom attended BYU—Brent W. Romney, ’82, frequently visited his siblings in Provo, where he was free to explore the wonders of such places as the Wilkinson Center, the Eyring Science Center, and the athletic facilities.“I fell in love with the campus and the area surrounding it. Even as a child I felt an affinity for the valley.”It was not surprising, then, that Romney would choose BYU as his future alma mater. Most of his brothers had majored in accounting, and he joined them in pursuing accounting as a vocation.“As I considered what I would do, I decided the most important things in my life would include my spouse and eventual children,” he says. “What I did professionally would be secondary. I enjoyed accounting and believed I had some capabilities that would allow me to support my family.”Romney says he received an “absolutely incredible education” with professors who injected a high level of interest into his studies. Upon graduation, he accepted an auditing position with Price Waterhouse, and his postgraduate affiliation with BYU began almost immediately.“A senior manager took me aside and really mentored me,” he says. “He said the BYU Management Society was starting a group in Dallas, where I was working. I accepted his suggestion to become involved, and since then I have been active in either the BYU Management Society or the Alumni Association.”Romney hopes he and the alumni board can provide progressive vision to help connect other alumni to BYU.“Being on this campus is almost like being on holy ground,” he explains. “Whenever I return, all those feelings I had when I was a child and a student rush back. It’s not really a sense of nostalgia. It’s more a feeling that there is a sacred mission about the university. I’ve always had a very strong feeling about that.“What is difficult when I visit alumni elsewhere is that I find many people who had great experiences at BYU but no longer feel connected to the university. They have drifted from a real sense of what a great university this was for them and how it affected their lives. I am so indebted to BYU. One goal is to have them feel that BYUspirit again.”Among Romney’s plans is greater communication to add awareness about BYU, particularly when groups, teams, and representatives are in chapter areas. He also hopes to use Web technology to connect alumni to BYU. Additionally, he believes asking alumni to help can often build affinity.He donates freely to BYU and believes everyone should be asked to contribute, regardless of their circumstances. “Even a donation of $10, $5, or $1 is a token of appreciation from the heart and an act of giving to BYU.”Romney’s son Bradley, ’05, for example, attends BYU and sings with the Men’s Chorus. In the 2001 student-driven Choose to Give campaign, Bradley asked his father to help the men’s singing group have a 100-percent donation rate. His father explained it was important for everyone to give on their own but said he would match his son’s contribution 10-to-1 up to $20 and five other singers’ contributions 10-to-1 up to $10 each. The chorus had full participation.Romney’s drive to serve crystallized many years ago when his job took him to Detroit. While there, he visited former Michigan governor George Romney. “He put his arm around me and told me good people must become involved and specifically said I should become involved. That really hit home. I knew about his commitment to public service, and I determined to become involved as well.” Besides BYU and Church service, Romney actively serves in various civic efforts, including a religious-community task force in Dallas.

These 11 alums represent the finest from each college and the Kennedy Center.