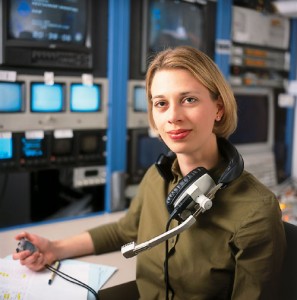 For broadcast producer Lindsay Palmer, journalism is an opportunity to both learn and serve.WHEN George W. Bush made a brief stop at the Provo Airport while on the campaign trail in the fall of 2000, he met with a select group of journalists in a private press conference. Lindsay A. Palmer, ’02, was among them.“It was an amazing experience. Journalism is an incredible vehicle to see the world,” Palmer says. “I can’t even tell you how many classes I’ve skipped to cover something at the Utah legislature or to hear someone like General Schwartzkopf speak.”According to Palmer, that decision to miss class to see General Schwartzkopf is indicative of the difficult balance between the rewards of journalism and the sacrifices it requires. At the time, Palmer was a reporter for the Daily Universe. For the past school year, however, she has worked in an even more time-consuming position as the producer for the daily television broadcast of NewsNet, BYU‘s award-winning student news organization.“At NewsNet, she’s the gatekeeper,” says Dean W. Paynter, ’79, managing director of broadcasting. “She decides what goes in the newscast and what doesn’t. Palmer is a serious reporter, one who has gone out of her way to become knowledgeable about the news of the day and the long-term issues.”A typical day at NewsNet begins around 8 a.m. when Palmer gathers with student reporters to discuss their stories. After setting up the lineup for the evening’s news and meeting with the program’s director, she works frantically with her crew to prepare and record their broadcast. There is little consistency to when the work at NewsNet ends, some days as late as midnight. “Journalists have late nights, early mornings, and little time on weekends,” she explains.And yet these are sacrifices Palmer is willing to make. “I love the passion of journalism. I love learning a little about everything. I love learning every day of my life. Journalism is the greatest general education you could have.”Despite her busy schedule, Palmer still finds time to pursue other interests. She talks excitedly about her intramural inner-tube water polo team and dreams of attending culinary school one day. This past February she was also able to work as a production assistant for the broadcasting company that provided the footage forNBC‘s Olympic coverage during the Salt Lake City Winter Games.Although Palmer says that with all her activities and responsibilities there is little time for personal pursuits like playing the piano, she believes this busy time of her life is a good preparation for opportunities to come.“BYU cares about helping us become journalists who can change the world,” she says. “There’s a saying up at NewsNet: How did you make people freer today?That’s the thing that makes journalism so important—helping other people to get the information they need to be better people and better citizens.”Her whole life, she says, has been an effort to work to a higher standard. “I love helping people be their best, encouraging them to achieve and find satisfaction in excelling. It’s what I do as a producer and what I’ve done all my life.”Again speaking of that private press conference at the Provo Airport, Palmer gives her impression upon meeting the president of the United States. “He’s a lot shorter than I expected,” she says, laughing. “He’s a good leader. Perfectionists in leadership positions often try to do everything themselves. You’ll be more successful if you teach other people along the way.”Paynter says that it is this attitude that makes Palmer effective as both a reporter and a producer. “Palmer is very much a teacher. She tries to teach others everything she knows. Other students work well with her because they respect her knowledge and character. Palmer is the kind of journalist who will one day build award-winning documentaries and news pieces.”

Five members of the BYU football team helped Kim Yeoman have a close encounter with a bear cub.