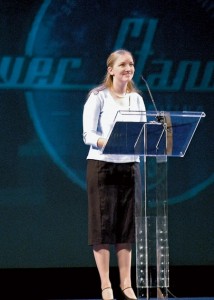 The annual George H. Brimhall Memorial Essay Contest honors a BYU founder as part of Homecoming. Kathryn L. Street, ’03, an English major from Stockton, Calif., won first prize in the 2003 contest and received $1,000 for her 1,000-word essay, “Ben Lomond,” which she read at Homecoming opening ceremonies. A condensed version of her essay is printed here.

I stood at the summit of Ben Lomond and looked down into the mist. I had spent the better part of a Scottish morning struggling up the mountain with a group of BYU students. What started as a “wee squall” according to Ian, our guide, had morphed into a wind-and-hail storm as we struggled for each step on the treeless slope up to the summit. I quickly discovered the difference between water-resistant and water-proof trousers, as rain beaded up on the inside of my pants and ran down my legs to form puddles under the arches of my feet. But there was no stopping.

At one point on the climb, I couldn’t tell if rain had collected on my chin, or if I had started drooling from my exertion. It didn’t matter, though. I kept placing one foot in front of the other, just as Ian had said to do. “The key to hiking in Scotland,” he said, “is to never stand still.” If you stop, the wind will send your body temperature plummeting. The key to survival is movement.

We fought our way to the top and looked down into mist in a numb stupor. I jumped from one foot to the other, splashing inside my shoes, trying to remember why I had agreed to walk 200 miles across the United Kingdom with a bunch of weakling English majors. I couldn’t feel my fingers or nose, I had blisters on half of my toes, and I craved hot porridge like never before in my life. It was only the second day.

Just like my student group in Scotland, Howard S. McDonald—BYU’s 6th president—was in constant motion. Former BYU president Ernest L. Wilkinson, ’21, said that President McDonald’s “life was characterized . . . by energetic activity.” There were too many things to do for his students’ physical and spiritual needs—too many mountains to climb—for him to ever stand still.

President McDonald wanted to give his students a true education—one that would turn students into citizens. He told teachers: “Teach students how to read, but more important, teach them to comprehend. Teach them the three R’s but above all, teach them to use their knowledge in life that they may apply it, may become better citizens.” Just as faith dies without work, so does an education. Without movement—a push forward in all aspects of life—four or six or 20 years of education is useless.

I stopped questioning my decision to hike across England when a wind suddenly picked up as we stood on the summit and blew the mist away long enough for me to catch a glimpse of Loch Lomond, stretching out for miles on either side of the peak. The view told me why the Jacobites sang about the bonnie bonnie banks of Loch Lomond and why the Romantic poets would hike 20 miles before breakfast. The cluster of shivering BYU students all around me, reciting poetry under their breath and writing in their journals, told me why applying my book knowledge to my world experience was so important to my education.

Just as faith dies without work, so does an education. Without movement–a push forward in all aspects in life– four or six or 20 years of education is useless.

I was able to hike up Ben Lomond because of the precedent our guide Ian set up for us. He challenged us to keep moving—so we did. Similarly, President McDonald set a precedent for BYU students. If we want to become contributing citizens, we need to follow his counsel and actively strive to connect our education with our experiences.

That morning, I climbed not just for the glory of conquering one of Scotland’s tallest peaks, but also to witness how Robert Burns’ nature “assume[d] its vernal hues: / . . . all freshly steep’d in morning dews” (“Composed in Spring,” lines 2, 4). It worked, and my education is better for it—because I didn’t stand still.

BYU archaeology students took their trowels and brushes to explore the foundation of Provo’s first tabernacle.