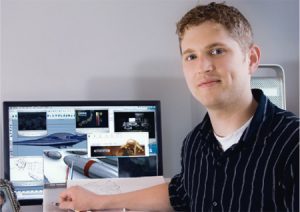 Eric Hochhalter, chair of the BYU Animation Alumni Association, is currently working on the documentary film Our Bombs.

Since he was in second grade, Eric Hochhalter (BFA ’04) has known he was going to be an animator. “I was always drawing and grew up on cartoons,” he says. “I told everyone this is what I wanted to do.”

Hochhalter was one of the first students accepted into BYU’s accredited animation program, and he worked on the BYU short films Turtles and PetShop, both of which received “student Emmys” from the Academy of Television Arts & Sciences Foundation. He also helped create Der Ostwind, the first BYU student-produced film to play at the Sundance Film Festival.

Now that he has launched a successful animation career, Hochhalter wants to stay connected to BYU animation faculty, students, and professionals, and he has established an Alumni Association affinity chapter to do just that. “The chapter provides a bridge between students and alumni,” says Hochhalter, who is the chair of the BYU Animation Alumni Association. “It’s a gathering place for people who share high values and who create uplifting content.”

The chapter is unusual because it does everything online, says Shelli Thomas Sivert (BA ’99), alumni services coordinator. The BYU animators’ online community facilitates learning and networking for students and professionals alike through blogs and RSS feeds.

To get involved with the BYU Animation Alumni Association, or to create your own affinity group, contact Shelli Sivert at shelli@byu.edu.

Celebrating anniversary of Joseph Smith’s birth with a selection of essays, poetry, music, photography, and art.

“There Are Bongos in the RB!”

A close look at a BYU day reveals a campus that is both familiar and surprising.

“Preach the Gospel. And If Necessary, Use Words”