By Cecil O. Samuelson in the Fall 2005 Issue

BYU Magazine celebrates the 200th anniversary of Joseph Smith’s birth with a selection of essays, poetry, music, photography, and art. 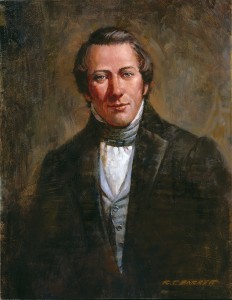 Joseph Smith, by Robert T. Barrett, associate Dean of the College of Fine Arts and Communications.

Even before the Church was organized, it became clear that Joseph Smith was no ordinary young man. Although born into modest means and circumstances, he quickly was identified as someone very special. You are aware of his early experiences. The First Vision was an unexpected occurrence that not only changed his life forever but literally changed the history of the world. His initial interview with the angel Moroni, occurring while he was just 17 years old, taught him that his life and work would not be usual by any measure.

Listen to these words from his history:He called me by name, and said unto me that he was a messenger sent from the presence of God to me, and that his name was Moroni; that God had a work for me to do; and that my name should be had for good and evil among all nations, kindreds, and tongues, or that it should be both good and evil spoken of among all people. [JS—H 1:33]That is an amazing prophecy for any 17-year-old. Think of the statistical improbability of the assertion that his “name should be had for good and evil” around the world. Yet the name of Joseph Smith is widely known among virtually all of the nations of the earth.

How is Joseph Smith’s name known in your heart? When Oliver Cowdery served as Joseph’s scribe for the Book of Mormon translation, the Lord said to Oliver, “Therefore be diligent; stand by my servant Joseph, faithfully, in whatsoever difficult circumstances he may be for the word’s sake” (D&C 6:18). What did the phrase “stand by my servant Joseph” mean to Oliver, and what should it mean to us?

Of those who have heard of Joseph, their knowledge and understanding are highly variable and occur at different levels. Let me mention a few of those levels. I hope as I mention these that you might mentally note where you stand.

Recognition: Increasingly, people recognize the name Joseph Smith and are able to relate him to The Church of Jesus Christ of Latter-day Saints, the Book of Mormon, and other basics of our faith. Some know enough, or believe that they know enough, to have developed opinions about him—positive or negative.

Appreciation: Of those who recognize the Prophet Joseph by name, some know that his accomplishments have made a difference. They know that he organized a church and movement that has grown dramatically and has influenced many lives. Although they may or may not believe in his work or admire his contributions, they acknowledge that the world is different because of his life and efforts.

Admiration: Many who appreciate that Joseph made a difference also admire many of his accomplishments and contributions. Although still not necessarily subscribing to his teachings or his mission, they admire what he did in Kirtland, Missouri, and Nauvoo. They admire his ability to enlist a following and to inspire people to sacrifice greatly for the cause he espoused.

Testimony: A subset of those who recognize, appreciate, and admire the Prophet Joseph are those who have a testimony of the truthfulness of his mission, his teachings, and his accounts of encounters with heavenly beings. They have no reservations about him or the doctrines he revealed, but they may not have fully internalized what this should mean to them.

True loyalty (or those who stand by him): Some, and I hope this includes you, have a testimony of the Prophet Joseph Smith and his unique and special mission. It is to you that I frame my question: What does it mean to “stand by my servant Joseph”? It means more than just recognition, appreciation—even admiration, belief, and testimony. The counsel given to Oliver Cowdery is illustrative of what I mean. To Oliver’s great credit, he never denied his testimony of the events and experiences he had with Joseph Smith. Unfortunately, he did not live up to what the Lord required of him and lost his place to one more faithful (see D&C 124:95).

As you know, the one called to replace Oliver was Joseph’s brother Hyrum. Without contrasting Hyrum with others unnecessarily, let us examine one example of how Hyrum responded to his charge to stand by Joseph.

Even before the Church was organized, Hyrum, Joseph’s elder by five years, knew the truthfulness of what Joseph was teaching. He wanted to do his part and pled to be called as a missionary. The Lord’s answer to Hyrum’s entreaty is found in section 11 of the Doctrine and Covenants. Let me just repeat part of the oft-quoted verse that must have been both a test and a trial forÂ Hyrum.

“Seek not to declare my word, but first seek to obtain my word” (D&C 11:21). I suppose, had Hyrum been inclined, that he could have been just as offended as were Oliver and others when Joseph, acting in his role as president and prophet, had to tell them the hard truth. To Hyrum’s everlasting credit, in spite of his initial disappointment, he stood by Joseph and received the blessings God reserves for those most loyal and trusted. These blessings included, less than a year later, the exact opportunity that Hyrum had initially sought (see D&C 23:3).

Another who stood by Joseph was Brigham Young. We don’t have time to catalog all of the times Brigham demonstrated his complete fealty to Joseph, but the Prophet recognized and appreciated it. Near the end of his life Joseph said, “Of the [original] Twelve Apostles chosen in Kirtland, . . . there have been but two but what have lifted their heel against me—namely Brigham Young and Heber C. Kimball.”1

Grateful are we that there were others besides Hyrum, Brigham, and Heber who stood by Joseph even when it may have seemed to many to be folly to do so. Not surprisingly, it was from this group who stood by Joseph that replacements for the Twelve and other key leadership responsibilities were later selected. Let me mention just two of them. 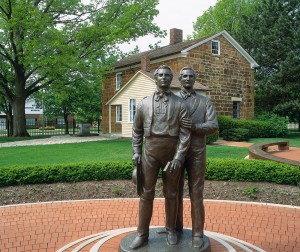 John Taylor, who would follow Brigham Young as Joseph’s successor, was stalwart from the time of his baptism in 1836. During the dark days in Kirtland he attended a meeting where President Joseph Smith, not in attendance, was severely criticized by apostates. John Taylor courageously offered this defense:It was Joseph Smith, under the Almighty, who developed the first principles, and to him we must look for further instructions. If the spirit which he manifests does not bring blessings, I am very much afraid that the one manifested by those who have spoken, will not be very likely to secure them. The children of Israel, formerly, after seeing the power of God manifested in their midst, fell into rebellion and idolatry, and there is certainly very great danger of us doing the same thing.2John Taylor saw what had happened to his colleagues and recognized the spiritual risks they faced. I submit that the danger to us as well is both great and real should we also fail to stand by Joseph.

Another who stood steadfast in the chilling wind of a contagious apostasy was Wilford Woodruff. He, like John Taylor, was called to replace those who had fallen, and he himself later succeeded President Taylor as the prophet. In discussing these matters and instruction given to him at the time of his call to the Twelve, he said:Brother Joseph laid before us the cause of those men’s turning away from the commandments of God. He hoped we would learn wisdom by what we saw with the eye and heard with the ear, and that we would be able to discern the spirits of other men without being compelled to learn by sad experience. He then remarked that any man . . . who pursued a course whereby he would ignore or in other words refuse to obey any known law or commandment or duty—whenever a man did this, neglected any duty God required at his hand in attending meetings, filling missions, or obeying counsel, he laid a foundation to lead him to apostasy and this was the reason those men had fallen.3Note with care the risk attendant to violating commandments and covenants.

What does it mean to us to stand by Joseph? Our testimonies are vital, but not sufficient by themselves. The Bible reminds us that even the devils believe in Jesus (see James 2:19). Our love and respect for Joseph Smith is important, but if it is not incorporated into our lives consistently, we cannot stand by Joseph.

The necessary conviction comes to us by study, by faith, and by always acting appropriately—and it is hard work. Those who I have named, as well as legions of others, have obtained this witness and internalized it through the manifestations of the Holy Ghost. The Holy Ghost is anxious to confer this sustaining knowledge to us because the testimony of Joseph’s work and mission is key to our testimony of that which is most important of all: that Jesus is the Christ, our Savior and Redeemer, and the literal living Son of our living Heavenly Father.

How grateful we are to Joseph for his worthiness to witness what he did for us. How grateful we should be that we are allowed to “stand by” Joseph with our own actions and testimonies of the Father and the Son.Cecil O. Samuelson is the president of BYU. This essay is condensed from a devotional address given Jan. 18, 2005. The full text is available online atmore.byu.edu/standbyjoseph.NOTES: