“Preach the Gospel. And If Necessary, Use Words”

I’ve always liked the maxim attributed to St. Francis of Assisi “Preach the gospel. And if necessary, use words.” The stories of valiant Latter-day Saints who met and overcame everything life tossed at them eloquently “preach the gospel” of good works and tenacious righteousness and encourage us fellow pilgrims at the rear of the caravan to press on. 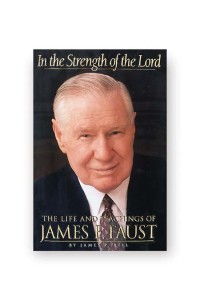 Impressive recent biographies by BYU alumni and faculty join the growing shelf of biographies published in the last few years. Now James P. Bell, ’79, former editor of this magazine, adds to these distinguished volumes a fine biography of President James E. Faust, Second Counselor in the First Presidency of the Church of Jesus Christ. In the Strength of the Lord: The Life and Teachings of James E. Faust (Salt Lake City: Deseret Book, 1999; 487 pp.; $22.95) recounts President Faust’s lifelong service to the Church. I found of particular interest the chapter treating Elder Faust’s presidency of the Church’s International Mission at the beginnings of the Church’s presence in Africa, just prior to the 1978 revelation on priesthood. The volume also collects, in 230 pages, the teachings of President Faust. This is a good book—well paced, well written, and well packed—about an exceptional man; it is a testimonial to how the Lord refines, polishes, and magnifies his servants to effect his purposes.The same can be said for A Disciple’s Life: The Biography of Neal A. Maxwell (Salt Lake City: Deseret Book, 2002; 631 pp.; $21.95), by Elder Bruce C. Hafen, ’66. Here is the well-told story of a gifted and talented man’s destined rise, test by test and by the tutoring of others, through discipleship to Discipleship. The book follows Elder Maxwell’s battle, since 1996, with leukemia, in which suffering he has characteristically earned further keys to discipleship. Elder Hafen recounts that in March 2000, while pondering his illness, Elder Maxwell “had a sacred experience” in which “the soul voice of the Spirit came into his mind to whisper, ‘I have given you leukemia that you might teach my people with authenticity.’ The words . . . [confirmed] his belief that the Lord had authored his tutorial—and his recovery” (p. 562). Elder Maxwell has taught by example and word that others can come to know “the fellowship of [the Lord’s] sufferings” (Philip. 3:10) through submission to trials, suffering, and chastening at the hands of a loving Father. Of particular interest in this fine book is Elder Hafen’s skillful examination of Elder Maxwell’s distinctive writing and sermon style, which are so much a part of the remarkable life and ministry of this beloved John of the early 21st century.Finally, I mention a highly unusual biography. Maniilaq: Prophet from the Edge of Nowhere (Seattle, Wash.: Onjinjinkta Publishing, 2001; 134 pp.; $12.95), by Steven B. Terry, ’76, and Jill K. Anderson, is the fascinating story of Maniilaq (pronounced Mu-knee-lyuk), an early- 19th-century Eskimo prophet to Alaska’s Inupiat. Taught in his youth by a bird about taatagiik (the Father and the Son) and about Isrummiqsuqtik (Source of Intelligence or Holy Ghost), Mannilaq taught his people that Grandfather God loves them. He accurately prophesied (circa 1835) the coming of the white man and modern technology. After teaching the Inupiats the ways of Grandfather God, Maniilaq and his family disappeared into the northland, leaving an oral legacy, which, until now, has remained virtually unknown beyond the Eskimo people. 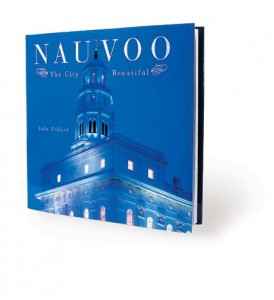 On June 27, 2002, the 158th anniversary of the martyrdom of the Prophet Joseph Smith, President Gordon B. Hinckley dedicated the Nauvoo Illinois Temple, an event of closure and refreshing that turned Latter-day Saint hearts and the pens of several BYU alumni and faculty to Nauvoo the Beautiful, now beautiful once more. Fred E. Woods, ’81, in Gathering to Nauvoo(American Fork, Utah: Covenant Communications, 2002; 261 pp.; $19.95) tells the story of the Latter-day Saints’ converging on Nauvoo from the far-flung nations of the earth. The majority of emigrants came from Great Britain in some 34 companies. Woods recounts their journeys across the Atlantic, through the Gulf of Mexico, and up the Mississippi River to Nauvoo and describes their eventual participation in the westward trek.Don F. Colvin, ’62, a retired CES teacher and administrator, presents in Nauvoo Temple: A Story of Faith (American Fork, Utah: Covenant Communications, 2002; 308 pp.; $29.95) “the most detailed and pertinent information and descriptions regarding the external and internal physical features of the Nauvoo Temple” (p. viii). Colvin concludes with the history of the purchase of the various plots comprising the Nauvoo Temple block and the reconstruction of the temple.Heidi S. Swinton’s Sacred Stone: The Temple at Nauvoo (American Fork, Utah: Covenant Communications, 2002; 166 pp.; $29.95) is the third of her companion volumes for a PBS documentary-film trilogy, after American Prophet: The Story of Joseph Smith, and Trail of Hope: The Story of the Mormon Trail, all directed and produced by Lee Groberg. Sacred Stone, a documentary history told, Ken Burns-like, with text, interviews, and still photos, places the original Nauvoo Temple in context with ancient holy temples and with the history of the rise and fall of the city.In Nauvoo: The City Beautiful (Salt Lake City: Eagle Gate, 2002; 54 pp.; $19.95), John W. Telford, ’71, BYU professor of photography, presents a collection of more than 50 lovely color photographs of the Nauvoo Illinois Temple, homes, and surroundings, including Carthage and the graves of Joseph and Hyrum Smith.Nauvoo-related products include three useful travel guides by BYU alumni and faculty. The LDS Family Travel Guide: Independence to Nauvoo (Orem, Utah: Granite Publishing, 2002; 264 pp.; $14.95), by Rebecca Cardon Smith, ’77, tells you how to plan your trip and what to see in each location. Emeritus Professors LaMar C. Berrett, ’62, (general editor) and Keith W. Perkins, ’70, and Professor Donald Q. Cannon have compiled Sacred Places, Volume 3: Ohio and Illinois: A Comprehensive Guide to Early LDS Historical Sites (Salt Lake City: Deseret Book, 2002; 276 pp.; $19.95). This guide to both LDS and non-LDS historic sites includes 12 separate walking or driving tours of Nauvoo. In the first of three volumes on Mormon historical sites, Old Mormon Nauvoo and Southeastern Iowa: Historical Photographs and Guide (Santa Ana, Calif.: Fieldbrook Productions, 1991; 257 pp.; $14.95), associate professor Richard N. Holzapfel, ’80, and T. Jeffery Cottle divide Nauvoo into eight guided tours, complete with clear maps and copious and concise historical details.Finally, here are a book of essays and a pair of novels worth your while. Thomas G. Plummer, in Waltzing to a Different Strummer (Salt Lake City: Bookcraft, 2002; 184 pp.; $9.95), presents 18 witty and wise essays about living life fully. The essays arise from musings evoked after a serious surgery brought Plummer, a BYU professor of German, to realize his own shortfall in fully enjoying life. Annette Lyon, ’95, in Lost Without You(American Fork, Utah: Covenant Communications, 2002; 201 pp.; $14.95), tells the love-adventure of Brooke Williamson, a 28-year-old, still-single school teacher who finds that, while”the course of true love never did run smooth” (A Midsummer Night’s Dream, act 1, scene 1, line 144), the Holy Spirit is a reliable and persistent micromanager. And Robert Farrell Smith, in his seventh “funny Mormon novel,” For Time & All Absurdity (Salt Lake City: Bookcraft, 2002; 249 pp.; $11.95), leads readers through a merry maze after tormented Ian Smith, whose farcical misadventures amidst his family of misfits, with a series of dates “from the telestial,” and with college roommates who try his precarious sanity, prepare him, at last, for his well-deserved reward: the girl of his dreams.

The Creative Works office offers a number of BYU-created documentaries on video that provide insights into the lives of remarkable individuals.Helen Foster Snow: Witness to a Revolution (2001, 56:46 min., $19.95)Filmed on location, this documentary chronicles Helen Foster Snow’s 10-year sojourn in China in the 1930s. Having traveled there from Utah to research a novel, Snow witnessed the political chaos that eventually led to the rise of Mao Zedong, whom she personally knew.Crossing Borders: The Life and Works of Leslie Norris (2000, 56:46 min., $14.95)For years BYU literature students have admired the wit and charm of internationally celebrated author and teacher Leslie Norris, professor of English. In this biography Norris returns to his native Wales and discusses its tradition of storytelling and his own award-winning poetry and stories.The Faith of an Observer: Conversations with Hugh Nibley (1985, 52 min., $12.95)In this biographical film, Hugh W. Nibley, a BYU professor emeritus of ancient scripture, talks about his upbringing, spiritual growth, and views on subjects including war, education, wealth, and temples.INFO: 1-800-962-8061; creativeworks.byu.edu.

For more information on books reviewed in “Preach the Gospel. And If Necessary, Use Words,” see the links, phone numbers, and addresses below:

– James P. Bell, ’79, In the Strength of the Lord: The Life and Teachings of James E. Faust (Deseret Book)

– Steven B. Terry, ’76, and Jill K. Anderson, Maniilaq: Prophet from the Edge of Nowhere

Clues about a Supreme Court justice’s motivations in one of the most important decisions in U.S. history found in BYU.

Geologist Wade Miller found fossils in Mexico that rewrite the history of the Panamanian Isthmus.