In the darkening California evening, two runners led the way around a track in the women’s steeplechase finals at the 2004 U.S. Olympic Track and Field Trials in Sacramento. Though the exhibition event was not on the docket for the Athens Olympics, it would count as a U.S. championship.

The front-runner, however, would not be claiming the title, having been disqualified on the first lap. The second runner, and de facto leader, wore a navy blue BYU jersey. In her last lap of the race, Kassi Andersen (BS ’04) was running strong, on pace for a new personal-best time. She had won the NCAA championship in the event in 2003 and surpassed that time earlier in 2004.

Clearing the water barrier for the last time, Andersen landed hard on the side of her foot. Somewhere down in the water, her ankle rolled, foot bones broke, and she fell.

Lying in the water pit, she looked up. Ahead of her loomed one more hurdle and 200 meters of track. She rose and began to run, limping down the track. She cleared the final barrier, sending a stronger jolt of pain through her body, and kept going. Somewhere in those final 200 meters, a runner passed her, but Andersen pushed herself across the finish line for second place at 9:45.52, only one second off her personal best, despite the injury and the fall. She had pushed herself to her limits—past her limits, perhaps—in a quest for excellence.

Citius. Altius. Fortius. The three-part Olympic motto calls athletes to swifter, higher, and stronger feats. But what may be most significant about these Latin terms is what they don’t say. The terms use the suffix ius, which means “more,” not issimus, which means “most.” The motto could very well have been citissimus, altissimus, fortissimus—swiftest, highest, strongest. Don’t the Olympic Games, after all, exist to honor the best in athletic achievement?

But “best” terms, while climactic, are also definitive and final. If one is truly the best, then there can be nothing better. It is a pinnacle. An absolute.

“Better” leaves room for growth. It inspires improvement. It opens the door to the possibility that an athlete can be a little faster, a little higher, a little stronger. “Better” also applies to every athletic situation. An athlete can perform a little better in this moment, given these circumstances, than he or she might have with less effort. An athlete can dig deeper and give more, despite adverse weather, emotional distress, a costly mistake, or an injury. 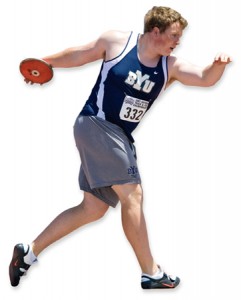 That’s what Justin S. Wilcock (BS ’05) did. In 2004 Wilcock was one of three U.S. men to climb the pale-blue 3-meter springboard in Athens. Severe pain from a stress fracture almost kept him out of the water, but Wilcock didn’t go to Athens to sit at the side of the pool. So he ascended the ladder and dove. Six times. His performance was miserable—both in pain and quality. But when he climbed out of the pool after his last dive—in last place for the event—the audience erupted in applause. In that moment, in that circumstance, in that athlete, they had seen greatness. Wilcock had been fortius, stronger than he might have been.

Being swifter, higher, and stronger requires neither perfection nor a gold medal. It requires determination to pour every ounce of one’s soul into the performance. 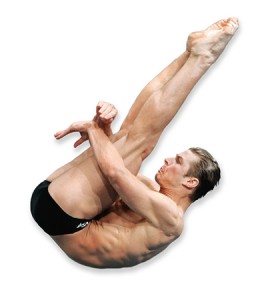 This summer Kassi Andersen and Justin Wilcock were back at the Olympic trials. In early July, Wilcock was among the divers contending for a slot in both the 3-meter springboard and synchronized diving events. For her part, after four years of trial and setback—including what might have been a career-ending car accident—Andersen doggedly climbed back to the pinnacle of her sport (see “Olympic Trials,” p. 34). This time, however, women’s steeplechase is on the Olympic agenda, and the top runners will go to Beijing.

As this magazine was going to press, Andersen competed in the steeplechase semifinals. Her training hampered by a lingering foot injury, she wasn’t at her best, and she did not qualify for the finals. She was not the swiftest runner. But the Olympic ideal calls for her to be swifter, not swiftest. And she was. Given the events of the last four years, she might have been in the stands—or at home—instead of on the track. But she wasn’t. She was swifter than she might have been. She gave higher effort than she might have given. Her performance was stronger than it might have been. Citius. Altius. Fortius.

Dozens of athletes with BYU ties set their eyes on the 2008 Summer Olympic Games in Beijing. Below you can read how they fared. (The first six athletes listed here will represent their countries in Beijing. The others performed well enough to be given a chance but will not be going to the Olympics.)

In addition to the athletes listed here, four other Cougars will coach, judge, or analyze Olympic events:

Hugh McCutcheon (BS ’93): A former BYU volleyball player, McCutcheon is the head coach for the U.S. Men’s Indoor Volleyball Team. Tragedy struck early in the games, when a group including McCutcheon’s wife, Elisabeth; his father- and mother-in-law, Todd and Barbara Bachman; and a tour guide were attacked by a man with a knife while visiting a tourist attraction in Beijing. Todd Bachman was killed by the assailant, while Barbara Bachman and the guide received serious injuries. Elisabeth was not injured. Read more at ESPN.com.

Ed Eyestone (BS ’85): The coach of the BYU men’s cross-country team, Eyestone will be an NBC analyst for the 5K, 10K, and marathon races.

Team USA went 5-0 in its pool-play round, qualifying for the quarterfinals, where the U.S. beat Serbia in a tight match.

After surviving another nail-biter in a 3-2 semifinal victory against Russia, Team USA beat Brazil in the finals to win the gold medal.

“U.S. Flexes Its Muscle over Russia,” from Time magazine

Team USA went 5-0 in its pool-play round, qualifying for the quarterfinals, where the U.S. beat Serbia in a tight match.

After surviving another nail-biter in a 3-2 semifinal victory against Russia, Team USA beat Brazil in the finals to win the gold medal.

“U.S. Flexes Its Muscle over Russia,” from Time magazine

In pool play, the Venezuela team went 1-4 and did not advance to the quaterfinals.

Will be the only discus thrower to represent Sweden at the Olympic Games.

Arrhenius best throw in the second heat of competition was 58.22 meters. He placed 14th in his heat and did not advance.

“Olympics: Arrhenius fails to advance,” from the Deseret News.

Strength and conditioning coach for the BYU track team and a BYU grad student. Finished third at the U.S. Olympic Trials.

Camarenda advanced to the final round, where she threw a season’s-best toss of 18.51 meters and finished in 12th place, the highest finish for an American.

“She gave it her best shot,” from the Daily Democrat

USA Men’s 3000m Steeplechase Finished third at the U.S. Olympic Trials, earning a spot on the Olympic team.
McAdams finished his heat in 9th place with a time of 8:33:26. He did not advance to the finals.

“Olympics: McAdams runs out of gas in qualifier,” from the Deseret News

Finished 23rd in the preliminaries at the U.S. Olympic Trials.

Araujo was on Brazil’s national team, which competed in the international Olympic Qualifying Tournament in July. Brazil lost to Germany in the quarterfinals and will not compete in the Olympics.

“Olympics notes: Revue or Olympics — or both — for Koufos?” from the Deseret News

“BYU Basketball: From BYU to Brazil” from the Salt Lake Tribune

The Dominican Republic’s national team, for which Batista plays, did not qualify for the Olympic Games.

Finished 22nd in the preliminaries at the U.S. Olympic Trials and did not qualify for the Olympic team.

“2 ex-BYU athletes advance at trials” from the Deseret News

Finished 49th in the 200m Butterfly preliminaries and 46th in 400m Individual Medley preliminaries at the U.S. Olympic Trials. Born in Hong Kong, Grant has dual citizenship and competed for a slot on the Hong Kong team as well. She did not make it onto either Olympic team.

Finished 97th in the preliminaries at the U.S. Olympic Trials and did not qualify for the Olympic team.

Finished 10th in the semifinals at the U.S. Olympic Trials and did not qualify for the Olympic team.

Profile at byucougars.com
“2 ex-BYU athletes advance at trials” from the Deseret News

Finished 53rd at the U.S. Olympic Trials and did not qualify for the Olympic team.

Profile at byucougars.com
“Ex-Glad swimmer qualifies for Olympic trials” from The Spectator

Olympic rules allow only one naturalized citizen to play on an Olympic team. The Russian team strongly considered Hansen but ultimately chose another non-native player.

Finished 12th in the semifinals at the U.S. Olympic Trials and did not qualify for the Olympic team.

Crashed at the BMX World Championships and missed qualifying for the Olympic Games by one point.

Finished 10th in the preliminaries at the U.S. Olympic Trials and did not qualify for the Olympic team.

Puerto Rico’s national team, for which Perez plays, did not qualify for the Olympic Games.

Suffered a knee injury that will prevent him from competing at the Olympic Games.

“They’re American, except in the Olympics” from the Los Angeles Times

Feature at byucougars.com
“Provo’s Rohatinsky fails in Olympic bid” from the Salt Lake Tribune
“2 ex-BYU athletes advance at trials” from the Deseret News

Tavernari was on Brazil’s national team, which competed in the international Olympic Qualifying Tournament in July. Brazil lost to Germany in the quarterfinals and will not compete in the Olympics.

Finished third in the finals at the U.S. Olympic Trials. Later failed to clinch a spot on the Olympic team at the Olympic Selection Camp.

See what happened during the Fall 2013 sports' season.

From Walk-On to All-Star

He’d never played on a team before BYU. Now he’s shirting up for Team USA.

Game-Day Reflections of a Blue Blood

Year after year, thousands of Cougar faithful are brought together by BYU football.