Behind the Scenes of Caps and Gowns

By Charlene Renberg Winters ’73 in the Winter 2001 Issue 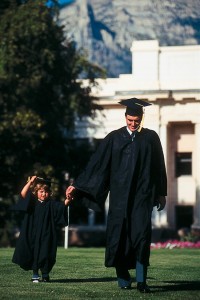 Helping graduates enjoy their graduation experience is the goal of the caps and gowns team. They even help parents find child-sized gowns.

A male student barreled through the double doors of the Alumni House to see if he could grab a gown and catch up with classmates who were already making the ceremonial trek to the Marriott Center for commencement. He was typical of several students each year who forget to order caps and gowns or make last-minute decisions to participate in graduation.What wasn’t typical of this student, however, was his size. He stood nearly 6 feet 4 inches tall and weighed around 350 pounds.“We always keep a few extra gowns for those who change their minds and want to walk, but we worried a little when we saw him,” says Nancy L. Carson, who directs BYU‘s cap and gown program with Amber L. Parker, ’99. “We did not have what he needed—so we improvised. I even think we had to pin him into the gown. But he got to walk with his class.”Such last-minute rescues are second nature to the team of seasoned volunteers and supervisors who help more than 7,500 graduates participate in graduation each year.“For many students, graduation marks the first time they have visited the Alumni House, and we want it to be pleasant for them,” Carson adds. “We know it’s crowded, but we hope that with good organization and friendly personnel it will be a good experience.”Carson says sometimes a gentle touch helps, too.“We had a young lady who came to get her cap and gown and said she only planned to use it for convocation because nobody would be coming to her commencement. She was wearing shorts and had biked to campus, but we could tell she had some interest in commencement. We convinced her it would be memorable, and one of the staff volunteered to join the audience to support her. We put her in her cap and gown, and when she returned them the next day, she thanked us and said she was glad she had participated.”Some married students want their children to be part of graduation, so Carson and Parker connect graduates with a Provo woman who makes graduation gowns for children. “And we provide the tassel,” Carson adds.Preparing for cap and gown distribution requires weeks of work, including coordinating mailers, organizing hundreds of boxes of caps and gowns, and planning workers to accommodate crowds that vary from a handful one day to several hundred the next.Students are advised to obtain their gowns early, in part because their gowns are packaged in plastic. Those who arrive the last day are frequently surprised that their gowns come out of the bags wrinkled.“Many assume we iron them, but it’s the student’s responsibility,” Parker says. “This year a young woman who was meticulously groomed asked about our pressing service. When we told her we didn’t have one, she gasped that she had to give the prayer at a convocation in 10 minutes. We pulled out our portable steamer and, as the graduate said, saved her day.”Carson says she has learned to expect anything. This past August one student had misunderstood the length measurement when he ordered his gown. He picked it up shortly before commencement only to discover it was short—the same length as his shorts. When he tried it on he looked as if he were wearing a dress. With black socks.“I could not let this be his memory of his graduation,” she says, and she selected a better gown. “He was delighted, but for me, it was simply all in a day’s work.”

See how BYU is planning to honor the great LaVell Edwards.