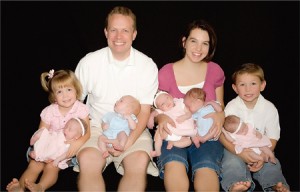 At birth Jayson and Rachelle Wilkinson’s quintuplets weighed more than 21 pounds together, more than any set of quintuplets ever born in the United States

Rachelle Curtis (BS ’97) and Jayson V. Wilkinson (BS ’99) hoped they might have three children—or perhaps even four. But neither of them figured they would have seven. And they certainly did not imagine that five of them would arrive the same day.

Life changed dramatically for the Cedar Park, Texas, couple in July, when Rachelle delivered the heaviest set of quintuplets ever born in the United States—the babies had a combined weight of 21 pounds, 7.2 ounces. Kassidy weighed 5 pounds, 1 ounce, the largest female quint ever born in the United States. The smallest of the five was her sister Kaydence, at 3 pounds, 6 ounces.

Before becoming pregnant Rachelle taught a statistics night class at community college while she raised 7-year-old Riley and 4-year-old Kaiya. “My life now revolves around babies, feedings, and diaper changes,” she says. “When I attended BYU I wondered how my mathematics and statistics studies would work with motherhood, but with this many babies, I have my own sample as I chart their feedings, weight, medications, health, and sleep patterns.”

As she describes her experience carrying and delivering five babies at the same time, more of the statistician emerges. “To get pregnant a third time we needed an ovulation inducer,” she says. “We knew multiple births were possible, but the chances of getting five are one in 56,000. We were shocked when we got the news and knew the odds were challenging. The average gestational age for quintuplets is about 28 weeks. Babies born before 26 weeks have only a 50 percent chance of survival, and only 40 percent of those are born without problems.”

Her doctor recommended that the Wilkinsons reduce their numbers to twins for the best chance of a healthy pregnancy, a suggestion they rejected. “How could we make a choice to abort any of them? It was lose-lose for us. I experienced despair and discouragement, and we both prayed a lot,” says Rachelle.

Each got the impression at different times that keeping all five was the answer. “I knew Heavenly Father wanted us to have these children, and with the decision made, I became happy and confident again,” she says.

As they looked for medical care, the couple found a doctor in Phoenix who had an excellent reputation for multiple-birth deliveries. Eighteen weeks into her pregnancy, Rachelle moved in with an aunt who lived in Phoenix and watched as her stomach expanded. 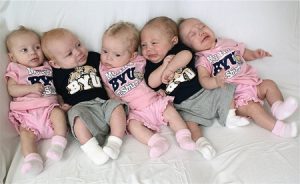 “I’m only 5’2″ and thought my stomach would split if it grew any more. There wasn’t a lot of room there, and I could not get my body into a sitting position. Near the end it felt as if there was a cat fight going on inside me most of the time.”

Rachelle delivered the babies at 34 weeks and says they were “premature but perfect.Â The first baby came home after 10 days and the last one at 19 days. They were small, but normal and healthy.”

While Rachelle was in Phoenix, her engineer husband moved the family into a new home, where her friends created a large nursery outfitted with five cribs and multiple shelves. “I was totally surprised,” she says. “It is the best nursery I have ever seen.”

The Wilkinsons have had generous help from Church members, friends, and others who often take care of the babies at night while Rachelle sleeps. Jayson’s company, National Instruments, gave them a 12-passenger van; others donated a year of formula and a five-baby stroller.

As things settle a bit, the couple has focused on the unique characteristics of each child. As Rachelle describes them, Rustin is mellow and the most easygoing—even with red hair. Kaydence is sunny and feisty. Ryder is a little thinker, and Kendall has a sweet personality. Kassidy is pretty even-tempered, and when she falls asleep, she sleeps the longest.

Rachelle and Jayson have become accustomed to stares and comments, but even they had to laugh when, at a doctor’s visit, they overheard someone say, “What? Did they have a sale at Babies ‘R’ Us?”

May we follow the Lord's teachings and develop the tools we need to create Zion capital in us.

A Joyful Gathering of God’s Children

In times of physical distancing, nurturing the university’s community of disciple-scholars becomes all the more vital.