An otter waking up from anesthetic slumber can be scary. Just ask Matthew D. Westover (BS ’09), who posed for a picture while cradling a drowsy river otter sporting a freshly implanted transmitter. The Kodak moment quickly ended, says Westover, when the otter began “groggily trying to bite me.”

He, fellow grad student Casey C. Day (BS ’09), and wildlife sciences professor Brock McMillan have worked with the Utah Division of Wildlife Resources (UDWR) since 2009 to return otters to the wilderness they called home more than 100 years ago. The BYU group helped trap and release the 25 otters, set free into the Provo River between Jordanelle and Deer Creek Reservoirs. 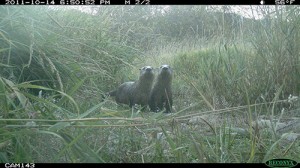 “Every otter is different,” McMillan says. “Some dart straight for the river and dive in and you never see them again. Some . . . swim in front of you for five minutes, playing on the bank.”

While crayfish are an otter’s favorite meal, fish are the primary food source for the Provo River otters, which may help balance an abundant fish population that is competing for food and space. “The river otters are a natural part of the ecosystem,” says UDWR sport fish coordinator Roger Wilson.

The students tracked the otters’ travels until the radio-transmitter batteries expired. Now they’ve set 10 surveillance cameras to do the job, snapping pictures at otter sites when movement is detected—getting candids of not only otters but also muskrats and the occasional bobcat.

It’s been a success for the students as well. Westover now works as an environmental consultant and Day’s otter escapades took him to the International Otter Colloquium in Italy and on to an otter-focused PhD at Purdue. Even after hours of collecting otter scat, Day has a soft spot for the critters: “They’re very cute, no question.”

Jennifer Edwards has used her BYU training in art education to enliven the environments of hospitals and schools.

A Life Full of Flowers