Driving along the night-darkened Tamiami Trail in the middle of the Florida Everglades with a carful of his ward’s young men, Devin D. Belliston (BA ’11) stops to unlock a gate to access canals available only to hunters with a special permit. Secluded, relaxing even, the hunt feels almost like fishing—except the prey is sometimes 12 slithering feet of muscle cased inside deceptively dry, silky skin.

The headlights illuminate an enormous shape on the road, and the car’s occupants burst out in excitement. Armed with only a flashlight and a homemade snake bag (a supersized pillowcase, really, lovingly embroidered by Belliston’s mom), these city-slicker LDS boys are hunting Burmese pythons—and two of them, Belliston and his friend Blake Russ, have captured national headlines in BuzzFeed and the New York Times with their reptilian achievements.

During the month-long 2013 Python Challenge in January and February, hosted by the Florida Fish and Wildlife Conservation Commission, Belliston and Russ bagged the longest snake of the contest—a hefty 11-foot-11-inch python—along with four other pythons (the second-highest capture in the competition). And they caught them all by hand, as opposed to some of the less experienced, machete- and gun-wielding hunters. 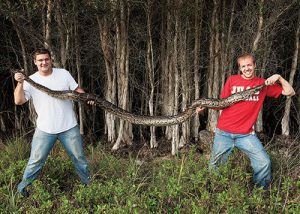 Pythons have become an invasive species in the Florida Everglades, where BLake and Russ and BYU grad Devin Belliston (right) have become award-winning snake hunters.

Native to Southeast Asia, the pythons originally came to the Everglades as escaped or abandoned pets. The invasive species wreaks havoc on the ecosystem, eating native birds, reptiles, and even mammals like bobcats and deer. “It’s the perfect place for them,” Belliston says. “Their skin patterns blend in perfectly; if you put a python a few inches deep in the grass, you can lose a 9-foot python easy.” Belliston and Russ take the bagged snakes to the University of Florida or the wildlife commission for research and euthanization.

“[Seeing a python] is almost like seeing some mythical creature for the first time,” says Belliston, a Utah native who studied anthropology at BYU. “When you grab it, of course, it’s a huge adrenaline rush because your heart starts pumping and you’re in for a little bit of a wrestle with it for a minute—hold on to its tail, dodge the bites, and wait for the right moment to try to grab its head.”

Returning by midnight, Belliston wakes up the next morning to teach physical science to inner-city high schoolers in Miami through Teach for America. In his second year of teaching, he keeps a snake at school for his students.

Belliston usually hunts with Russ, whom he met at church. Russ grew up in swampy central Florida and had experience with handling snakes and alligators. “My entire life I have been known for catching any- and everything with my bare hands,” says Russ, who attended BYU–Idaho and whose parents graduated from BYU. “For me animals are a testimony that God is real and that He created this world.”

Belliston and Russ have caught more than 20 pythons since they started a year ago—with full encouragement from their wives. “It’s not as scary or as crazy or as dangerous as people might think,” Belliston says. Rather than wade through gator-infested swamp, they stick to the roads and canals, where the cold-blooded snakes expose themselves to the warm pavement on summer nights and the morning sunlight in winter. The pythons themselves are not venomous nor are they big enough to constrict and kill a grown human.

Despite sewing the snake bags, Belliston’s mom won’t go near the serpents. Belliston took her to see alligators, and they came across a python. “I grabbed it,” he says, “and my mom was screaming, ‘Oh, that’s gross! Just let it go! Just let it go!’ and I was like, ‘Mom, I can’t just let it go. It’s my responsibility to take it because they don’t belong here. I can’t just leave it here.’ But I didn’t have a snake bag, so I had her pop the trunk, and I just threw it in, and we went on our way with a big python in the back.”

Despite Belliston’s busy schedule in the coming months—expecting the birth of his and Krysta Rubio Belliston’s (BS ’11) first child, pursuing an MPA, and teaching full-time—he hopes to continue hunting invasive reptiles as much as he can. “We’ve got to catch one of those 17-foot-long ones.”

Bennett has been able to turn back the evolutionary clock to a time when beetles’ ancestors had many legs.