A Life Full of Flowers

Online shop owner and creator of the design blog The House That Lars Built, Brittany Watson Jepsen (BA ’06) likes to say she grew up teething on the seaweed of Southern California. But rather than spending her time in the ocean, she preferred diving into a sea of colored paper, scissors, glue, and other craft materials—adopting the motto of her mother, Kim Bradshaw Watson (’74), that “a creative mess is better than tidy idleness.” 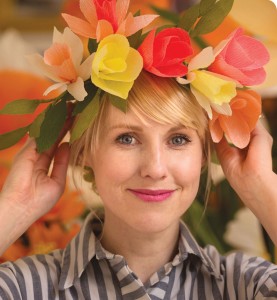 From timid undergraduate to trophy-wielding champion, Brittany Jepsen shares enchanting designs on her blog, “The House That Lars Built.”

Her fascination with beautiful creations has led to opportunities as expansive as working with acclaimed designers in New York City and designing for Tiffany & Co. and as whimsical as winning first place in NBC Today’s 2013 Kentucky Derby hat competition by fashioning a paper-rose hat easily twice the height of her head. After she won the contest, she hoisted her trophy as proudly as if she were the jockey who won the race.

Although the idea of being a designer had always intrigued her, when Jepsen enrolled at BYU she opted to major in art history. “I was too scared to apply to the interior design program,” she says. “But I am happy with my choice because it . . . helped me cultivate an artistic sense of what has gone on in the past.”

Her BYU studies included the Washington Seminar, where her bishop helped her get a full-time position as a design assistant with Marriott Hotels. The work with designers and clients boosted her confidence, which led her to pursue a master’s of interior design at the Corcoran College of Art and Design.

In 2011 Jepsen traveled to London to sell her original, self-described “non-tacky” memorabilia outside the wedding of Prince William and Kate Middleton. She constructed commemorative plates, mugs, key chains, and tote bags that were later featured in such magazines as Vogue and Matchbook. “I grew up fantasizing I would marry Prince William,” she laughs, “so when I had the opportunity to be in Great Britain, I decided to embrace the celebration.”

For the reception of her own 2010 marriage, to Paul A. Jepsen (’17), whom she met while studying in Copenhagen, she created a fairytale setting in the spirit of Hans Christian Andersen, with oversized paper flowers and garlands that enveloped the grounds as well as colorful 2-foot-diameter Scandinavian flowers for each guest table.

Although she didn’t think her flowers had professional potential, her mind changed after 15 different bloggers published her wedding pictures and the traffic on her blog exploded. It wasn’t long before she was shipping her enormous flowers all over the world.

Jepsen has capitalized on her love of all things floral to create a thriving business on social-media platforms. Her blog, which began as a class project during graduate school, has had millions of visitors and is particularly popular when she features famous designers’ homes.

“When I travel, I like to see architectural features and home design choices, and this blog has given me access into houses I want to see,” she says. The House That Lars Built also features her illustrations and photography as well as the work of other crafters and artists. Generous with her ideas, Jepsen provides several step-by-step, do-it-yourself tutorials every week and encourages collaborations with other artists.

Many of her projects are fanciful: bouquets made of Christmas balls, paper flower vases shaped like ice-cream cones, and string lights wrapped in cellophane like candies. She recalls with particular pleasure the Christmas party she designed for the Danish Embassy shortly after returning to the United States from Denmark in 2009. “I chose to use recycled materials for everything, and we took over the ambassador’s house,” she explains. “We put snowstorms in all the rooms, intertwined with”—what else?—“flowers everywhere.”

Remarkable wildflowers survive in the intense heat of Southern Utah.

Naval officer and BYU alumnus Doug Herrin shares why he was named Military Engineer of the Year.