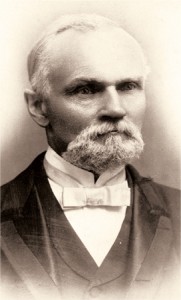 BYU owes its heritage to many remarkable teachers and scholars, beginning with the considerable contributions of early leader Karl Gottfried Maeser. The master teacher’s inspired guidance in the school’s critical founding years continues to illuminate and inspire the university today, more than a century after his death.

BYU will celebrate the early leader this fall when it recognizes him during Homecoming 2007. Maeser will be this year’s honored founder.

Educated in Germany, Maeser joined The Church of Jesus Christ of Latter-day Saints and immigrated to Utah shortly after the U.S. Civil War. In 1876 Brigham Young appointed Maeser principal of Brigham Young Academy, with the admonition that he should not teach even the alphabet or the multiplication tables without the Spirit of God.

Speaking at Brigham Young Academy’s first Founders Day on Oct. 16, 1891, Maeser said he had “no comprehension of the magnitude of the work” to come when President Young laid out the plans for his new mission. He added, however, that he never wavered from his conviction that the academy was a divinely inspired school of destiny.

When he arrived in Provo, Maeser faced some sobering challenges. The town was largely apathetic toward the fledgling school, enrollment included a mere 29 students, and he was the only instructor. He would spend the next 15 years in abject poverty with inadequate premises, limited facilities, and even open opposition from some community leaders.

“If amidst all these changing scenes clouds of discouragement did occasionally darken the horizon of our vision, they were always dispelled by the voice of the Spirit whispering, ‘O ye of little faith.’”– Karl G. Maeser

Maeser once said, “If amidst all these changing scenes clouds of discouragement did occasionally darken the horizon of our vision, they were always dispelled by the voice of the Spirit whispering, ‘O ye of little faith.’”

During one of the financial crises at the academy, he decided to accept a position at the University of Deseret in Salt Lake City. His wife and daughter packed their trunks and prepared to leave. After a couple of days, his daughter finally mustered enough courage to ask her father when they were leaving.

“I have changed my mind,” he said. “I have had a dream—I have seen Temple Hill [the present site of campus] filled with buildings—great temples of learning, and I have decided to remain and do my part in contributing to the fulfillment of that dream.”

And he did. Maeser is often cited as the spiritual architect of Brigham Young University. It has been said that what Brigham Young did for the settlement of the West, Karl Maeser did for education in the West. He stayed at BYA until 1892, when he accepted an assignment as general superintendent of Church schools in Salt Lake City and assistant superintendent of Sunday Schools in the Church.

After Maeser’s death on Feb. 15, 1901, students, colleagues, and alumni were determined to honor their beloved teacher in a lasting way with a memorial that became the first permanent university building on upper campus—and the first of the temples of learning Maeser had envisioned. Since the completion of the graceful structure in 1910, the Maeser Building has served thousands of students and provides a permanent reminder of a man whose mission had been to save souls, mold character, and teach eternal truth.