All Creatures Great and Small

Where can you find an 8-foot-diameter model of the Earth showing the latest satellite images from NASA? Hint: It’s between two 17-foot giraffes, just above a rhino. And it’s surrounded by thousands of specimens of all kinds: 110,000 fishes, 38,000 amphibians and reptiles, 32,000 mammals, and 11,000 birds—a total of 2.8 million items, once you add in plants, lichens, insects, and Shasta the Liger. 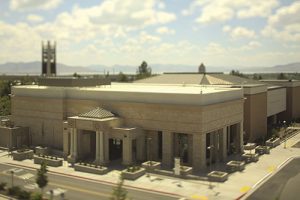 The new east entrance leads to 25 public exhibits, including the President Boyd K. Packer Gallery and Life on Top: Apex Predators. Behind the scenes are BYU’s nine research collections, a valuable resource for faculty, students, and the scientific community. Photo by Bradley Slade.

The 32,400-square-foot expansion, funded by donors, is clad in native sandstone and features classic columns capped with chiseled sego lilies, a symbol of Utah’s pioneer heritage that regularly appears in the artistic works of President Boyd K. Packer (EdD ’62), now housed in a central gallery inside the addition.

With the new addition, the museum is more than one-third bigger. Now there’s almost 90,000 square feet filled with extensive research collections, thought-provoking portrayals of nature, and eye-popping scenes of predators and prey.

“We are trying to display things that could very well happen in nature . . . and do it in a way that is not only beautiful and informative but spectacular too,” says St. Clair. 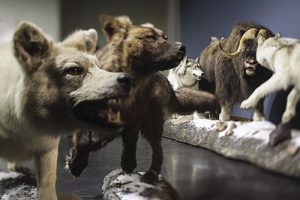 Speed, Strength, Stealth, or Size? Which attributes do the elite athletes of the wild use to stay, literally, on top of their game? This Arctic scene shows a pack of wolves maneuvering to separate out the young or weak, while a musk ox herd nearby forms a perimeter of protection. A circle of heads and horns will often deter a fast-moving pack of hungry predators.

Upstairs, Arctic wolves bare their teeth and flank a herd of musk ox circling to shield their young. A grizzly bear rises up in an epic battle with a bull moose, a leopard springs into the air after fleeing impalas, and a toothy alligator emerges from long blades of grass. These dynamic mounts are part of a major donation—shipped from Arizona in five semis—by George H. Brimhall (BA ’66), great-grandson of BYU’s fourth president.

Every beautifully framed doorway in the museum leads to learning opportunities. You can step into the President Boyd K. Packer Gallery and appreciate the Apostle’s love of nature expressed in a lifetime of handcrafted art. One door down you can be dazzled by the vibrant and varied plumage of peacocks, ducks, and pheasants in the Fred and Sue Morris Waterfowl Collection. Through another doorway you can find the original tiger donated by Monte L. Bean decades ago, just down the hall from Shasta.

Central themes in the museum’s mission are Jesus Christ as Creator and the role humans have as stewards over the earth. The messages seem to be getting through. One 9-year-old visitor told museum staff members, “I used to not like nature, but seeing this museum is making me feel like a part of nature.”

A Testimony in Wood and Paint

While preparing conference talks over 53 years as a General Authority, President Boyd K. Packer of the Quorum of the Twelve Apostles has kept his hands occupied by carefully cutting and shaping chunks of yellow pine, basswood, or tupelo. “During those hours working with my hands, I pondered on the marvels of creation, and inspiration would flow. As I carved wood, I carved out talks,” said Packer in a 1999 BYU Education Week address. 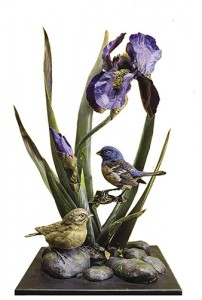 A Lifetime of Art The President Boyd K. Packer Gallery is now the permanent home for more than 600 of his wood carvings, sketches, bronze castings, and paintings. “He’s an inspiration with his artwork, with his example, and with his teachings,” says Jamie Graver, who visited the gallery when it opened on June 7, 2014. © Boyd K. Packer Family 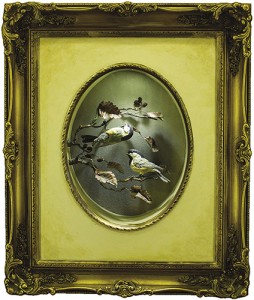 Chickadees and Copper Leaves President Packer creates detailed tree branches and molded copper leaves to give his feathered friends a natural setting. Wesley R. “Skip” Skidmore (BS ’78), museum assistant vertebrate curator, says these chickadees remind him of those he’s seen in the wild: “Those little birds are happy-go-luckies; whether it’s snowing, raining, hot, or cold, they are up there, flitting around the pine trees.” © Boyd K. Packer Family; Photo by Bradley Slade

And often as he carved he would reference a bird specimen borrowed from the Bean Museum, where his son Kenneth W. Packer (BA ’75, MEd ’86) works as exhibit designer. Models allowed him to be precise and accurate as to size, color, and even “the number of pinna in a feather,” says museum director Larry St. Clair.

A central gallery in the new wing of the museum displays President Packer’s creations and artifacts from more than 77 years: detailed bird carvings, sketches, paintings, and bronze sculptures, along with photographs and World War II heirlooms.

President Packer created many of the works to beautify his home. On one gallery wall is a reproduction of the Packer fireplace mantel, decorated with pioneer wagons and sego lilies. Another part of the gallery re-creates the Packer family room, where several of President Packer’s paintings can be seen.

This gallery shows “multiple sides to Dad, not just what you see in a Church setting,” says Ken. “When you see the birds, you can start to see why he can paint verbal pictures in telling a story and why he [is] so good at teaching.”

President Packer’s attention to detail in his art—the delicate structures, iridescent feathers, and behaviors of birds—reflects his broader testimony: “The beauty and precision of the universe, the endless variety of plant and animal life—all testify of a plan and of a Creator.”

“Although beauty has many guises, the purest beauty to be found is in nature and in the works of God.” —Monte L. Bean

The Treasure of the Museum

The specimens—gathered from 1900 to the present—are used in countless ways, including identifying animal tissue with DNA analysis, researching climate change, and providing compelling visuals for campus lectures. 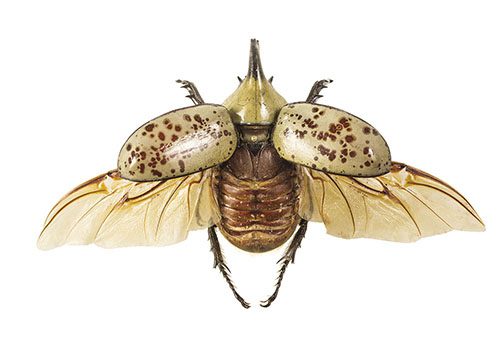 A Fly on the Wall Whether you prefer big insects, like this rhinoceros beetle, or tiny spiders, the museum likely has one in their collection of 2 million arthropods. Exhibits include a butterfly made of butterflies and a wall featuring electron-microscope close-ups of bugs. Photo by Bradley Slade.

When the Bean Life Science Museum first opened in 1978, it consolidated campus research collections previously held in the Heber J. Grant and George H. Brimhall Buildings. The number of specimens began at 1.3 million and grew quickly; before the renovation, many drawers and filing cabinets in the research areas of the museum were filled to capacity with nearly 3 million specimens of vascular and nonvascular plants, vertebrate and non-vertebrate animals. 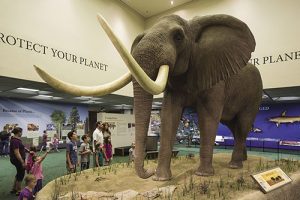 An African elephant is the central character in the museum’s Protect Your Planet exhibit, which also features plants and both freshwater and marine life. Surrounding displays tell tales of extinct passenger pigeons, threatened desert tortoises, and endangered black-footed ferrets. “Every exhibit tells a natural history story,” says Larry St. Clair. “It talks about what humans can do to fix the problems we are causing.” Photo by Bradley Slade.

Vascular plant curator Leigh Johnson notes that if a researcher plucks a plant’s leaf or blossom and records when and where it was collected, 100 years later, someone can return to the same location to see if that plant is still growing there. “With those data—location and date—then it’s really a snapshot in time of a particular specimen,” he says. Of the collections, St. Clair says, “It’s like a library that documents knowledge over time and space.”

In addition to bearing a detailed testimony of the Creator, these collections, says St. Clair, provide mentoring opportunities for faculty and students and a research resource for the broader scientific community. “Finally, we use those resources to teach our students and the general public about the patterns and processes and diversity of life on Earth.” 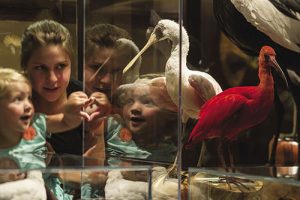 A Pretty Fowl Experience “Shhh. Don’t ruffle any feathers in here.” It’s a favorite line Skip Skidmore shares with visitors to the Fred and Sue Morris Waterfowl Collection—the world’s most complete collection of waterfowl and pheasants, with 330 specimens of more than 100 species. Almost all of these birds lived in private sanctuaries and died due to natural causes. Photo by Bradley Slade.

“Stuff your eyes with wonder, live as if you’d drop dead in ten seconds. See the world. It’s more fantastic than any dream made or paid for in factories.” —Ray Bradbury

College students don't need to own pets to have experiences with all sorts of animal encounters.

Adventures at the Museum

One student’s enthusiasm for the Museum of   Peoples and Cultures is netting volunteers and visitors.