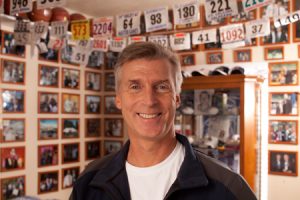 Eric Johnson acted as Tom Hanks’ stand in and double in Sleepless in Seattle.

Eric R. Johnson (BS ’84) enjoys watching Sleepless in Seattle. “It’s fun to watch for myself,” he explains. “I always know when it’s Tom Hanks and when it’s me.” Johnson worked as both Hanks’ stand-in and double for the film. “It was the best class I ever had,” Johnson says about the experience, “to learn from the best and get paid for it.”

The opportunity did not completely surprise him. He had built a good reputation as a reliable actor, and when the original double was fired, he was the first man called.

Johnson discovered his passion for acting and dancing in high school. He initially figured it was a good way to chase girls, but he also had a knack for it. While at BYU, he performed in movies as a dancer, getting a chorus part in Footloose. Encouraged by his success, he got an agent and was cast in several other films. Soon, the popular television series Northern Exposure came to town.

Thousands of actors auditioned for only a few parts available each week. Johnson participated in weekend workshops put on by the casting directors, using the workshops as his own personal audition. He soon got a call offering him a part and was often called back to play completely different characters, from snooty French waiter to monk.

“I never minded getting up in front of folks,” he says. “I had very little fear. You could even say I enjoyed it.”

But Johnson doesn’t just perform in front of the camera. He has also pursued excellence in track and in his own career field. Specializing in the 50- and 60-meter dashes, the 400-meter hurdles, the triple jump, and the javelin, he has been named Male Amateur Athlete of the Year by Utah Best of State for seven of the last eight years and was awarded Sportsman of the Year in 2008.

Johnson, who lives in Lehi, Utah, is also a recreational therapist for the Utah Department of Corrections in Draper, where he works with mentally ill inmates. Additionally, he helps direct philanthropy work for the Utah Special Olympics and the American Lung Association of Utah.

Why Everyone Should Be a Scientist

As Latter-day Saints with a destiny to build Zion, we need to be standard-bearers of enlightened learning.