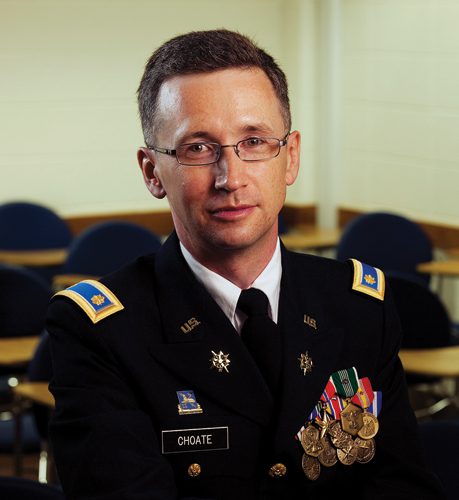 In the heart of southern Afghanistan, a newly restored shura, or council, met. BYU history professor Mark I. Choate was also in attendance, on duty with the U.S. Special Operations Command. During the meeting, a cell phone rang, interrupting the proceedings. Instead of shamefacedly turning it off, the village elder answered his call while the rest of the council smiled.

Under the Taliban, thousands of Afghans suffered silently when cell phone companies buckled under terrorist threats. Restored security allowed the companies to reinstate service. According to Choate, it was a “moment of triumph that [the elder] was able to take his cell phone call and walk outside.”

Choate returned to BYU this summer after eight months traversing Afghanistan, interviewing more than 300 coalition operators from 34 countries and documenting the history of special operations in Afghanistan. Choate, an Army Reserves major who joined the National Guard at age 17, collected the required military history and also produced a handbook on Afghan village stability, police-force development, and medical services for women and children. His work earned him the fourth-highest military combat award, the Bronze Star. “The award was a big honor that I really appreciate,” Choate says. He is also grateful for university support: “It was really nice for BYU to support the military and [me] leaving and going out and serving . . . literally on the other side of the world.”

The 11-and-a-half-hour gap made phone calls home difficult; Choate usually had to call around 11 p.m. or 6 a.m. after long and difficult days. Thanks to Skype, he participated in his family’s growing experiences, including celebrating his 15th anniversary with his wife, children’s lost baby teeth, and watching his son learn to crawl. Choate says it was painful to leave his family. “It’s very dangerous in Afghanistan. You have to get out among the people, but you’re still being targeted by the insurgents. . . . Every time I would go out I would pray and be very vigilant, very careful.”

Hard as it was, Choate believes in his role: “This is world history in the making, and if it’s not collected it will be lost like sand through a sieve.” Choate observed firsthand the transition from terrorist regime to democracy. Afghan shuras, he says, have been re-empowered; they are commissioning medical clinics for women and children, rebuilding infrastructure, and helping farmers grow saffron instead of the opium poppy used to fund terrorist activity. The people crave peace, says Choate. “Afghanistan was stable for thousands of years, so it’s not this permanently intractable problem.” He believes the country has a buoyant future in agriculture, mining, and even tourism because of the beautiful mountains in Gizab and the monolithic Buddhas in Bamiyan.

Choate knew many brave people who were killed trying to make that future a reality, and it taught him “to always work for a big goal and mission, to be part of a team and an aim for something bigger than yourself . . . because life is short and unpredictable.”

War Stories: A Newcomer to Motherhood

Keith W. Newcomer, '03, has been correcting his daughter for months now, but she still calls him "Mommy."

War Stories: Bird Out of Water

Laura Dowding Leseberg is an ROTC office specialist at BYU and waits her daughter Sarah's return from Kuwait.

War Stories: Here Comes The Bride, There Goes The Groom

All is not fair in love and war.