A Prize for the Drive

By Charlene Renberg Winters ’73 in the Winter 2001 Issue 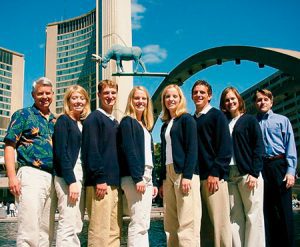 At a conference in Toronto, BYU’s Student Alumni Network was honored for a food-drive competition between BYU and the University of Utah.

OUT of 25 colleges and universities, BYU‘s Student Alumni Network (SAN) took first prize for outstanding program at the 2001 International Association of Student Advancement Programs in Toronto, Canada.SAN received the award for a food-drive competition between BYU and the University of Utah. At the same conference, SAN gave two presentations, one on its food drive and another on the BYUParents’ Program.“I am delighted that our student alumni group was given this prestigious award at the national conference,” says Reid A. Robison, ’75, who directs alumni activities. “Having attended the conference myself, I know they were very prepared and had several rehearsal sessions in which they practiced their presentations. Our student alumni group was a great ambassador for not only BYU but also the Church at this conference.”“We won the award, in part, based on our low budget of $1,000 that yielded 300 volunteers, 500 volunteer hours, the uniting of 30 campus organizations and 11 colleges, and more than 17,000 pounds of food,” says Todd J. Hendricks, ’00, program administrator.Hendricks, along with SAN members Janene S. Smith, ’02, Janae S. Wirig, ’02, Christian T. Clegg, ’03, R. Chad Rowan, ’02, Wendy L. Burt, ’02, and Desiree Bybee, ’01, accepted the award on behalf of SAN.At a conference in Toronto, BYU’s Student Alumni Network was honored for a food-drive competition between BYU and the University of Utah.Brigham Young Academy’s first home, Lewis Hall, far left, was a prominent feature of Provo’s Center Street in 1874. A replica is being constructed at Old Deseret Village in Salt Lake City.

In five years Jacob Durrant earned bachelor’s degrees in mathematics and Portuguese and a master’s degree in biology.